What is the 70 weeks prophesied in Daniel chapter nine? [closed]

Ask Question
Asked 6 years, 11 months ago
Active 5 years ago
Viewed 2k times
4
Closed. This question is opinion-based. It is not currently accepting answers.

In Daniel chapter nine, He prophesies:

Daniel 9:24 KJV Seventy weeks are determined upon thy people and upon thy holy city, to finish the transgression, and to make an end of sins, and to make reconciliation for iniquity, and to bring in everlasting righteousness, and to seal up the vision and prophecy, and to anoint the most Holy.

How can this prophesy be explained?

To explain the 70 week prophesy we have to determine what Daniel meant.

What is the 70 weeks prophesied in Daniel chapter nine?

Daniel 9:24 Seventy weeks are determined upon thy people and upon thy holy city, to finish the transgression, and to make an end of sins, and to make reconciliation for iniquity, and to bring in everlasting righteousness, and to seal up the vision and prophecy, and to anoint the most Holy.

The idea that "weeks" are not weeks comprise of seven days but of seven years each may find support at the beginning of the chapter where the context seems to be years.

Daniel 9:2 In the first year of his reign I Daniel understood by books the number of the years, whereof the word of the LORD came to Jeremiah the prophet, that he would accomplish seventy years in the desolations of Jerusalem.

The Babylonian captivity in which Daniel lived was 70 years long. It was what finally stopped Israel from practicing idolatry. The delay in the arrival of the Messiah may be related to the "seven times" factor of punishment.

The idea of "weeks" of years instead of days gains more support from the following verse.

Daniel 9:25 Know therefore and understand, that from the going forth of the commandment to restore and to build Jerusalem unto the Messiah the Prince shall be seven weeks, and threescore and two weeks: the street shall be built again, and the wall, even in troublous times.

If weeks of days are meant then the prophecy says that from the announcement to rebuild Jerusalem until Jesus comes would be a year and a half, not nearly enough time to relocate and rebuild the temple and city.

In order to answer the question it is necessary to first understand what Daniel meant by 70 weeks.

We are given a clue in verse 2:

Daniel 9:2 KJV In the first year of his reign I Daniel understood by books the number of the years, whereof the word of the LORD came to Jeremiah the prophet, that he would accomplish seventy years in the desolations of Jerusalem.

Jeremiah 25:18 KJV To wit, Jerusalem, and the cities of Judah, and the kings thereof, and the princes thereof, to make them a desolation, an astonishment, an hissing, and a curse; as it is this day;

Jeremiah 44:2 KJV Thus saith the LORD of hosts, the God of Israel; Ye have seen all the evil that I have brought upon Jerusalem, and upon all the cities of Judah; and, behold, this day they are a desolation, and no man dwelleth therein,

here it is worth noting that the use of the term 7 in the Bible is usually a notation meaning complete or total.

The following is pasted from http://www.gotquestions.org/seventy-weeks.html

The Vision is explained by the Angel Gabrielle.

21 Yea, whiles I was speaking in prayer, even the man Gabriel, whom I had seen in the vision at the beginning, being caused to fly swiftly, touched me about the time of the evening oblation.

22 And he informed me, and talked with me, and said, O Daniel, I am now come forth to give thee skill and understanding.

23 At the beginning of thy supplications the commandment came forth, and I am come to shew thee; for thou art greatly beloved: therefore understand the matter, and consider the vision.

Explanation of the Vision:

24 Seventy weeks are determined upon thy people and upon thy holy city, to finish the transgression, and to make an end of sins, and to make reconciliation for iniquity, and to bring in everlasting righteousness, and to seal up the vision and prophecy, and to anoint the most Holy.

25 Know therefore and understand, that from the going forth of the commandment to restore and to build Jerusalem unto the Messiah the Prince shall be seven weeks, and threescore and two weeks: the street shall be built again, and the wall, even in troublous times.

26 And after threescore and two weeks shall Messiah be cut off, but not for himself: and the people of the prince that shall come shall destroy the city and the sanctuary; and the end thereof shall be with a flood, and unto the end of the war desolations are determined.

27 And he shall confirm the covenant with many for one week: and in the midst of the week he shall cause the sacrifice and the oblation to cease, and for the overspreading of abominations he shall make it desolate, even until the consummation, and that determined shall be poured upon the desolate.

So does this literally mean 70 weeks?

Remember that we said that the number 7 when used in the Bible meant complete or total.

This usage of the number 7 in this case can be construed to indicate completion of time, or that is to say that this period encompasses the Church age, or that period between Christ's death on the cross and his second coming.

The prophet Daniel was given many direct visions and revelations by God through the angel Gabriel that pertain to the End Times. In fact, he was given so much information that Jesus Himself recommends that we study and understand what Daniel had to say.

The Divisions of the 70 Weeks quoted from http://www.gotquestions.org/seventy-weeks.html.

In verse 24, Gabriel says, “Seventy ‘sevens’ are decreed for your people and your holy city.” Almost all commentators agree that the seventy “sevens” should be understood as seventy “weeks” of years, in other words, a period of 490 years. These verses provide a sort of “clock” that gives an idea of when the Messiah would come and some of the events that would accompany His appearance.

The prophecy goes on to divide the 490 years into three smaller units: one of 49 years, one of 434 years, and one 7 years. The final “week” of 7 years is further divided in half. Verse 25 says, “From the time the word goes out to restore and rebuild Jerusalem until the Anointed One, the ruler, comes, there will be seven ‘sevens,’ and sixty-two ‘sevens.’” Seven “sevens” is 49 years, and sixty-two “sevens” is another 434 years: 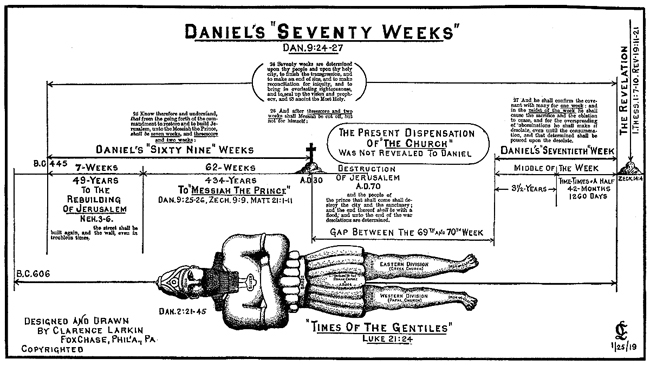 The prophecy contains a statement concerning God’s six-fold purpose in bringing these events to pass. Verse 24 says this purpose is 1) “to finish transgression,” 2) “to put an end to sin,” 3) “to atone for wickedness,” 4) “to bring in everlasting righteousness,” 5) “to seal up vision and prophecy,” and 6) “to anoint the most holy.”

Notice that these results concern the total eradication of sin and the establishing of righteousness. The prophecy of the 70 weeks summarizes what happens before Jesus sets up His millennial kingdom. Of special note is the third in the list of results: “to atone for wickedness.” Jesus accomplished the atonement for sin by His death on the cross.

Fulfillment of the 70 Weeks

Gabriel said the prophetic clock would start at the time that a decree was issued to rebuild Jerusalem. From the date of that decree to the time of the Messiah would be 483 years. We know from history that the command to “restore and rebuild Jerusalem” was given by King Artaxerxes of Persia c. 445 B.C. (see Nehemiah 2:1-8).

The first unit of 49 years (seven “sevens”) covers the time that it took to rebuild Jerusalem, “with streets and a trench, but in times of trouble”. This rebuilding is chronicled in the book of Nehemiah.

Using the Jewish custom of a 360-day year, 483 years after 445 B.C. places us at A.D. 30, which would coincide with Jesus’ triumphal entry into Jerusalem. The prophecy in Daniel 9 specifies that after the completion of the 483 years, “the Anointed One will be cut off” (verse 26). This was fulfilled when Jesus was crucified.

Daniel 9:26 continues with a prediction that, after the Messiah is killed, “the people of the ruler who will come will destroy the city and the sanctuary.” This was fulfilled with the destruction of Jerusalem in A.D. 70. The “ruler who will come” is a reference to the Antichrist, who, it seems, will have some connection with Rome, since it was the Romans who destroyed Jerusalem.

The Final Week of the 70 Weeks

Of the 70 “sevens,” 69 have been fulfilled in history. This leaves one more “seven” yet to be fulfilled. Most scholars believe that we are now living in a huge gap between the 69th week and the 70th week. The prophetic clock has been paused, as it were. The final “seven” of Daniel is what we usually call the tribulation period.

Daniel’s prophecy reveals some of the actions of the Antichrist, the “ruler who will come.” Verse 27 says, “He will confirm a covenant with many for one ‘seven.’” However, “in the middle of the ‘seven,’ . . . he will set up an abomination that causes desolation” in the temple. Jesus warned of this event in Matthew 24:15. After the Antichrist breaks the covenant with Israel, a time of “great tribulation” begins (Matthew 24:21, NKJV).

The prophecy of the 70 weeks is complex and amazingly detailed, and much has been written about it. Of course, there are various interpretations, but what we have presented here is the dispensational, premillennial view. One thing is certain: God has a time table, and He is keeping things on schedule. He knows the end from the beginning (Isaiah 46:10), and we should always be looking for the triumphant return of our Lord (Revelation 22:7).

Daniel's 70th week notes that the daily sacrifices and offerings ends in the middle of the week. The sacrifices and offerings ended in 70 AD. It marks the middle of the seven year (one week) war called the Roman-Jewish war or Jewish Rebellion. Titus made a covenant with the Roman Empire (with many) to squelch the Jewish uprising in 66 AD. The war ended in 73 AD with the mass suicide of the last stand of Masada. Titus decimated Jerusalem and the temple, totally fulfilling Daniel 9:27

Not the answer you're looking for? Browse other questions tagged exegesis old-testament prophecy prophets or ask your own question.

6
What is the argument supporting that there is a break between the 69th and 70th week in the book of Daniel?
2
Reason for the references to Christ hundreds of years before first century, in Book of Mormon
4
How did John the Baptist or Jesus fulfill Malachi 3:3?
3
According to Seventh Day Advent theology when does the 2300 evenings and mornings in Daniel 8:13-14 begin?
2
How can we understand the SDA interpretation of Daniel 9:26?
0
Why do some Christians interpret Daniel's 1260 day prophecy as days and not years?
3
How do Jehovah's Witnesses justify their interpretation of Daniel chapter 4 given the specificity of the text?