What day and year was the first public and general confession held in the Church of England?

What day and year was the first public and general confession held in the Church of England? Was it prescribed in the Act of Supremacy of 1532?

It was not prescribed in the Act of Supremacy, which occurred in 1534 (see that info further below). It looks like the rights to confession were first included in the "39 Articles of Religion," a small book with revisions throughout the years. Several sources confirm that these articles were drawn up in 1563 but I managed to find "An Essay on the 39 Articles of Religion," partially typed and partially handwritten, and as you can see below, it reads: "Agreed on 2 in 5 1562."

Also found this audio where you can actually hear the articles here, on MP3: (pdf) 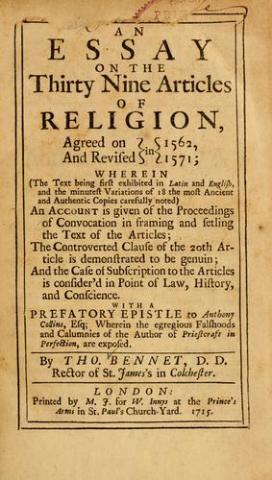 The right of confession is listed under the 25th article, titled "On Sacraments." This is a partial text.

"There are two Sacraments ordained of Christ our Lord in the Gospel, that is to say, Baptism, and the Supper of the Lord. Those five commonly called Sacraments, that is to say, Confirmation, Penance, Orders, Matrimony, and extreme Unction, are not to be counted for Sacraments of the Gospel, being such as have grown partly of the corrupt following of the Apostles, partly are states of life allowed in the Scriptures; but yet have not like nature of Sacraments with Baptism, and the Lord's Supper, for that they have not any visible sign or ceremony ordained of God. The Sacraments were not ordained of Christ to be gazed upon, or to be carried about, but that we should duly use them. And in such only as worthily receive the same have they a wholesome effect or operation: but they that receive them unworthily purchase to themselves damnation, as Saint Paul saith."

Antonio Garcia Fuerte, with a Theology degree from Catholic University in Spain, is Anglican and supportive of his religion. He explains the apparent controversies of his church's beliefs on confession in a scholastic paper here: (pdf)

According to the Encyclopedia Brittanica, the Act of Supremacy (1534) was issued through Parliament, making Henry VIII the head of the church of England. It required its patrons to acknowledge his marriage to Anne Boleyn. The act was revoked in 1555 and in 1559 a new act was adopted under Queen Elizabeth.

You can find it in its original, older English language here: (pdf)

"Albeit, the King's Majesty justly and rightfully is and oweth to be the supreme head of the Church of England, and so is recognised by the clergy of this realm in their Convocations; yet nevertheless for corroboration and confirmation thereof, and for increase of virtue in Christ's religion within this realm of England, and to repress and extirp all errors, heresies and other enormities and abuses heretofore used in the same, Be it enacted by authority of this present Parliament that the King our sovereign lord, his heirs and successors kings of this realm, shall be taken, accepted and reputed the only supreme head in earth of the Church of England called Anglicana Ecclesia, and shall have and enjoy annexed and united to the imperial crown of this realm as well the title and style thereof, as all honours, dignities, preeminences, jurisdictions, privileges, authorities, immunities, profits and commodities, to the said dignity of supreme head of the same Church belonging and appertaining. And that our said sovereign lord, his heirs and successors kings of this realm, shall have full power and authority from time to time to visit, repress, redress, reform, order, correct, restrain and amend all such errors, heresies, abuses, offences, contempts and enormities, whatsoever they be, which by any manner spiritual authority or jurisdiction ought or may lawfully be reformed, repressed, ordered, redressed corrected, restrained or amended, most to the pleasure of Almighty God, the increase of virtue in Christ's religion, and for the conservation of the peace, unity and tranquillity of this realm: any usage, custom, foreign laws, foreign authority, prescription or any other thing or things to the contrary hereof notwithstanding."

The Act of Supremacy made no alterations to the services, worship or doctrine of the Church of England apart from rejecting Papal authority. It was initially what today we might call a very soft Brexit.

Throughout Henry VIIi's reign the requirement for auricular confession (one-to-one with a priest) at least once per year. remained in force. This had been the case since the Fourth Lateran Council of 1215.

The Latin mass, used for centuries before the Reformation and throughout Henry VIII's reign, contained a form of confession, said first by the priest, and then by the assistant ministers. This is an English translation of the Sarum missal, most commonly used in the British Isles :

Let the priest say: I confess to God, to blessed Mary, to all the saints and to you: because I have sinned too much by thought, word, and deed by my fault: I pray, holy Mary, all the saints of God, and you to pray for me. Let the ministers respond: The Almighty God have mercy upon you, and pardon all your sins, deliver you from all evil, preserve and confirm you in good, and lead you to everlasting life. Priest. Amen. And afterwards let them say: I confess, &c., which being said, let the priest say as above. Then let the priest say: Absolution and remission of all your sins, space for true repentance, amendment of life, grace, and the consolation of the Holy Spirit, the Almighty and merciful God grant to you. Let the ministers answer, Amen. Amen.

This confession was in Latin and said only by the clergy.

Henry VIII died in 1547 and was succeeded by his young son, the boy King Edward VI.The first Boo Of Common Prayer in English was introduced in 1549, but an interim measure was brought in in 1548. On Easter Day, April 1st, 1548, throughout England and Wales, an addition to the Latin mass was inserted in English, although the Latin mass was still said in full with the English insert. This insertion in English included a General Confession to be said by one intending communicant on behalf of them all.

Then shall a general Confession be made, in the name of all those that are minded to receive the holy Communion, either by one of them, or else by one of the Ministers, or by the Priest himself; all kneeling humbly upon their knees.

ALMIGHTY God, Father of our Lord Jesus Christ, Maker of all things, Judge of all men; We knowledge and bewail our manifold sins and wickedness, which we, from time to time, most grievously have committed by thought, word, and deed, against thy divine Majesty, provoking most justly thy wrath and indignation against us. We do earnestly repent, and be heartily sorry for these our misdoings; the remembrance of them is grievous unto us; the burthen of them is intolerable. Have mercy upon us, have mercy upon us, most merciful Father; for thy Son our Lord Jesus Christ's sake forgive us all that is past; and grant that we may ever hereafter serve and please thee in newness of life, to the honour and glory of thy Name; through Jesus Christ our Lord.

Then shall the Priest stand up, and turning him to the people, say thus:

OUR blessed Lord, who hath left power to his Church to absolve penitent sinners from their sins, and to restore to the grace of the heavenly Father such as truly believe in Christ; Have mercy upon you; pardon and deliver you from all sins; confirm and, strength you in all goodness; and bring you to everlasting life.

That Easter, auricular confession to a priest, was no longer required as it had been in previous years, but it remained an option and people were urged to respect both those who did and did not use it.

...requiring such as shall be satisfied with a general Confession not to be offended with them that doth use, to their further satisfying, the auricular and secret Confession to the Priest; nor those also, which think needful or convenient, for the quietness of their own consciences, particularly to open their sins to the Priest, to be offended with them which are satisfied with their humble confession to God, and the general Confession to the Church; but in all these things to follow and keep the rule of charity; and every man to be satisfied with his own conscience, not judging other men's minds or acts, where as he hath no warrant of God's Word for the same.

So although in English, and said on behalf of all, it was still not said by everybody.

In 1552 a general confession was added at the start of both Mattins and Evensong, with effect from All Saints Day (Tuesday, 1st November, 1552).

This was to be said by the entire congregation.

A generall confession, to be sayd of the whole congregacion after the minister, knelynge.

ALMIGHTY and most mercyfull father, we have erred and strayed from thy wayes, lyke lost shepe. We have folowed too much the devises and desyres of oure owne hearts. We have offended against thy holy lawes. We have left undone those things whiche we oughte to have done, and we have done those. thinges which we ought not to have done, and there is no health in us: but thou, O Lord, have mercy upon us miserable offendors. Spare thou them, O God, which confesse theyr faultes. Restore thou them that be penitent, according to thy promyses declared. unto mankynde, in Christe Jesu oure Lorde. And graunt, O most merciful father, for his sake, that we may hereafter live a godly, righteous, and sobre life, to the glory of thy holy name. Amen.

The absolucion to be pronounced by the minister alone.

ALMIGHTY God, the father of oure Lord Jesus Christ, which desireth not the death of a synner, but rather that he maye turne from his wickedness and live: and hath geven power and commaundment to hys ministers, to declare and pronounce to his people, beinge penitent, the absolution and remission of their synnnes: he pardoneth and absolveth all them which truely repent, and unfeynedly believe his holy Gospel. Wherefore we beseche him to graunt us true repentaunce and his holy Spirite, that those thinges may please him, which we do at this present, and that the rest of our life hereafter may be pure and holy: so that at the last we may come to hys eternall joye, through Jesus Christ our Lord.

The following year Edward died aged 15 and his changes were reversed by his half-sister Mary, but restored by Elizabeth after Mary's death in 1558.

Not the answer you're looking for? Browse other questions tagged history church-history reformation church-of-england or ask your own question.