Was St. Joseph alive when Jesus came to preach in his hometown?

He came to his hometown and began to teach the people in their synagogue, so that they were astounded and said, “Where did this man get this wisdom and these deeds of power? Is not this the carpenter’s son?

Traditional teaching tells us that St. Joseph was already dead when Jesus embarked on his ministry. Joseph would have been a famous carpenter of the town, but not the only one in the profession. So, referring to the Late Joseph as “the carpenter” sounds incongruous. Note that the definitive article “the“ is peculiar to English whereas in some oriental languages, the part of verse reads as “that carpenter”. It is possible that St. Joseph was alive when these things happened?

My question therefore is: According to Catholic scholars, was St Joseph alive when Jesus came to preach in his hometown?

Was St. Joseph alive when Jesus came to preach in his hometown?

Possibly, but trading holds that he died before the public ministry of Jesus.

The Scriptures, tell us very little about St. Joseph. The last time Joseph appears in person in any of the canonical Gospels is in the narrative of the Passover visit to the Temple in Jerusalem when Jesus is 12 years old, which is found only in Luke. No mention is made of him thereafter.

The New Testament has no mention of Joseph's death, but he is never mentioned after Jesus's childhood, and Mary is always presented as by herself, often dressed as a widow, in other texts and art covering the period of the ministry and passion of Jesus. By contrast, the apocryphal History of Joseph the Carpenter, from the 5th or 6th century, has a long account of Joseph's peaceful death, at a very advanced age, in the presence of Jesus, Mary and angels.

Since the Scriptures are silent about St. Joseph’s later years, we can conclude that he was no longer living by the time Jesus began his public ministry. It would be expected, for instance, that if Joseph were alive, he would have appeared at Christ’s side (as Mary did) at the crucifixion (Jn. 19:26-27). According to various traditions, Joseph died when Jesus was an adolescent, perhaps in 18 or 19 AD.

Catholic scholars tend to agree that St. Joseph had died prior to Christ's ministry.

The only noteworthy incident recorded by the Gospel is the loss of, and anxious quest for, Jesus, then twelve years old, when He had strayed during the yearly pilgrimage to the Holy City (Luke, ii, 42-51). This is the last we hear of St. Joseph in the sacred writings, and we may well suppose that Jesus’s foster-father died before the beginning of the Savior’s public life. In several circumstances, indeed, the Gospels speak of the latter’s mother and brothers (Matt., xii, 46; Mark, iii, 31; Luke, viii, 19; John, vii, 3), but never do they speak of His father in connection with the rest of the family; they tell us only that Our Lord, during His public life was referred to as the son of Joseph (John, i, 45; vi, 42; Luke, iv, 22) the carpenter (Matt., xiii, 55). Would Jesus, moreover, when about to die on the Cross, have entrusted His mother to John’s care, had St. Joseph been still alive? According to the apocryphal “Story of Joseph the Carpenter”, the holy man had reached his hundred and eleventh year when he died, on July 20 (A.D. 18 or 19). St. Epiphanius gives him ninety years of age at the time of his demise; and if we are to believe the Venerable Bede, he was buried in the Valley of Josaphat. In truth we do not know when St. Joseph died; it is most unlikely that he attained the ripe old age spoken of by the “Story of Joseph” and St. Epiphanius. The probability is that he died and was buried at Nazareth.

Joseph was “a just man”. This praise bestowed by the Holy Ghost, and the privilege of having been chosen by God to be the foster-father of Jesus and the Spouse of the Virgin Mother, are the foundations of the honor paid to St. Joseph by the Church. So well-grounded are these foundations that it is not a little surprising that the cult of St. Joseph was so slow in winning recognition. Foremost among the causes of this is the fact that “during the first centuries of the Church‘s existence, it was only the martyrs who enjoyed religious veneration” (Kellner). Far from being ignored or passed over in silence during the early Christian ages, St. Joseph‘s prerogatives were occasionally descanted upon by the Fathers; even such eulogies as cannot be attributed to the writers among whose works they found admittance bear witness that the ideas and devotion therein expressed were familiar, not only to the theologians and great leaders of Christian thought, but to obscure preachers, and must have been readily welcomed by the people. The earliest traces of public recognition of the sanctity of St. Joseph are to be found in the East. His feast, if we may trust the assertions of Papebroch, was kept by the Copts as early as the beginning of the fourth century. - Saint Joseph

According to the Venerable Mother Mary of Jesus of AgredaSt. Joseph died in the presence of Jesus and Mary. What an awesome gift!

There are numerous accounts of this moment, but one that is particularly touching is from the writings of Venerable Mother Mary of Jesus of Agreda (aka the bi-locating nun). She wrote about the episode in “Mystical City of God,” and it is recorded as a private revelation.

Then this man of God, turning toward Christ, our Lord, in profoundest reverence, wished to kneel before Him. But the sweetest Jesus, coming near, received him in his arms, where, reclining his head upon them, Joseph said: “My highest Lord and God, Son of the eternal Father, Creator and Redeemer of the World, give thy blessing to thy servant and the works of thy hand; pardon, O most merciful King, the faults which I have committed in thy service and intercourse. I extol and magnify Thee and render eternal and heartfelt thanks to Thee for having, in thy ineffable condescension, chosen me to be the spouse of thy true Mother; let thy greatness and glory be my thanksgiving for all eternity.” The Redeemer of the world gave him his benediction, saying: “My father, rest in peace and in the grace of my eternal Father and mine; and to the Prophets and Saints, who await thee in limbo, bring the joyful news of the approach of their redemption.”‘At these words of Jesus, and reclining in his arms, the most fortunate Saint Joseph expired and the Lord himself closed his eyes.

Whatever did happen, Joseph must have died a “happy death” surrounded by the most loving wife and son in the whole universe. - How did St. Joseph die? 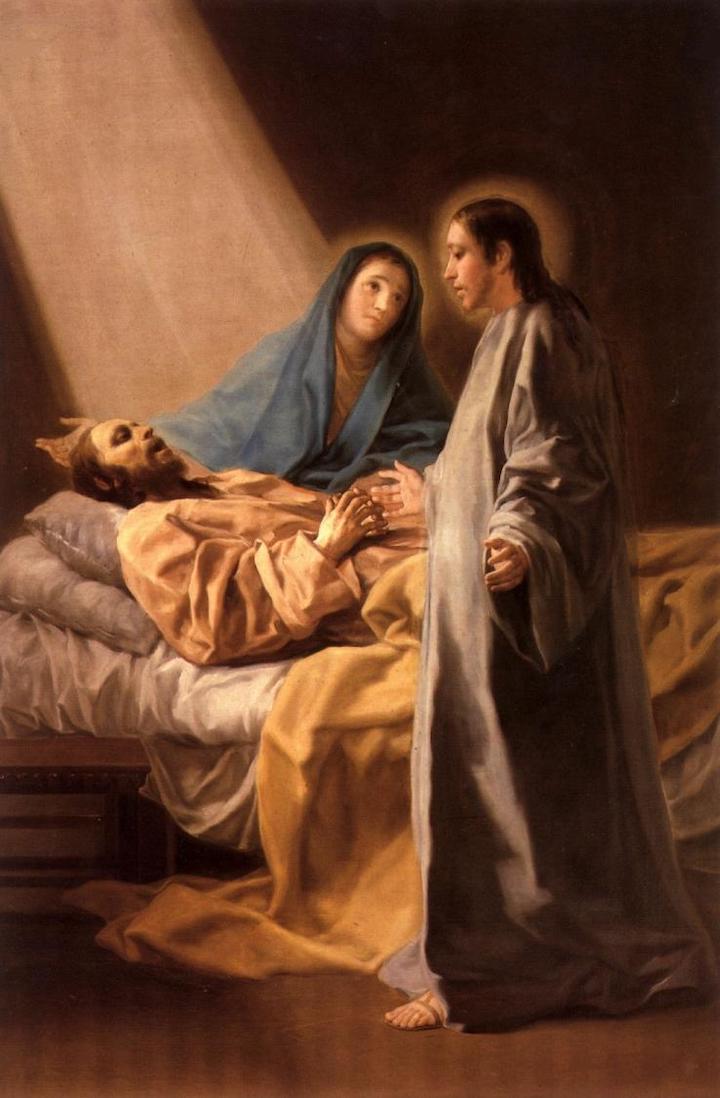 My best inference is that the tradition from the Church Fathers is true — that St. Joseph died peacefully sometime during those 18 years between the finding in the Temple and Jesus’ public ministry. Yet this is one of those questions about which the Church has not spoken authoritatively, so others are more than welcome to examine the evidence as well and to come to a different conclusion. - When did St. Joseph die? If Joseph died before Jesus’ public ministry, then why in John 6:42 does it say, “Is not this Jesus, the son of Joseph, whose father and mother we know?“

Not the answer you're looking for? Browse other questions tagged catholicism life-of-jesus gospel-of-matthew tradition joseph-husband-of-mary .

3
Is there any biblical basis for the Church to depict Jesus as a European or some other ethnic race?
0
Was St. Joseph always a righteous man?
3
How old was Jesus when the Magi visited him?
2
Was Mary ceremoniously married to Joseph when she left to serve Elizabeth?
0
Does the delayed burial of Jesus attest to the fact that he had no close relatives other than his mother?
3
How did Mary know after the Annunciation that she would be accepted as wife by Joseph?
3
Did Jesus descend into hell in his living body?