Was Mary ceremoniously married to Joseph when she left to serve Elizabeth?

Now the birth of Jesus Christ was on this wise: When as his mother Mary was espoused to Joseph, before they came together, she was found with child of the Holy Ghost.

Then Joseph her husband, being a just man, and not willing to make her a public example, was minded to put her away privily. But while he thought on these things, behold, the angel of the Lord appeared unto him in a dream, saying, Joseph, thou son of David, fear not to take unto thee Mary thy wife: for that which is conceived in her is of the Holy Ghost.......... Then Joseph being raised from sleep did as the angel of the Lord had bidden him, and took unto him his wife.

Luke, from his side, gives an account of the Annunciation and the Visit of Mary to Elizabeth “in those days" at Chapter 1: 26-45.

In case Mary visited Elizabeth just after the Annunciation, she may not have been ceremoniously married to Joseph. But if she stayed put at her home after the Annunciation till the marriage would be over, she would have become visibly pregnant as referred to at Mtt 1:18. But then, Joseph, her husband would have accompanied her to the place of Elizabeth. And in case he did not go, Mary would have been asked by Elizabeth : "Why did you come alone?" The sequence of events therefore points to the possibility that Mary left to meet Elizabeth just after the Annunciation, came back after three months to tell Joseph that she was pregnant with Jesus, and then they got ceremoniously married . My question therefore is: According to Catholic Church, was Mary ceremoniously married to Joseph when she left to serve Elizabeth?

Was Mary ceremoniously married to Joseph before she left to serve Elizabeth?

When the Archangel Gabriel visited Mary and declared unto her that she was called to be the Mother of God, as we see recorded in Luke 1, her response would become the cause of the spilling of a whole lot of ink over the centuries: “How shall this happen, since I know not man?” (v. 34, Douay Rheims, Confraternity Edition).

For Catholics this is an indication of Mary’s vow of perpetual virginity. It’s really quite simple. If Mary and Joseph were just an ordinary couple embarking on a normal married life together, there would be no reason to ask the question. Mary would have known very well how it could be that the angel was saying she would have a baby. As St. Augustine said it:

Had she intended to know man, she would not have been amazed. Her amazement is a sign of the vow (Sermon 225, 2).

There was no such thing as engagement (as it is understood in modern Western culture) in ancient Israel. The text says Mary was “betrothed” or “espoused” (Gr.—emnesteumene), not engaged. Betrothal, in ancient Israel, would be akin to the ratification of a marriage (when a couple exchanges vows in the presence of an official witness of the Church) in Catholic theology. That ratified marriage is then consummated—in the normal course—on the couple’s wedding night. So when Luke 1:27 says Mary was betrothed, it means they were already married at the time of the annunciation. If this were an ordinary marriage, St. Joseph would then have had a husband’s right to the marriage bed—the consummation.

For those who are not convinced “betrothed” equals “married” for Mary and Joseph; fortunately, the Bible makes this quite clear. If we move forward in time from the “annunciation” of Luke 1 to Matthew 1 and St. Joseph’s discovery of Mary’s pregnancy, we find Matthew 1:18 clearly stating Mary and Joseph were still “betrothed.” Yet, when Joseph found out Mary was “with child,” he determined he would “send her away privately” (vs. 19). The Greek verb translated in the RSVCE to send away is apolusai, which means divorce. Why would Joseph have to divorce Mary if they were only engaged?

Further, the angel then tells Joseph:

Do not fear to take Mary your wife, for that which is conceived in her is of the Holy Spirit . . . When Joseph woke from sleep, he did as the angel of the Lord commanded him; he took his wife (vss. 20-24).

Notice, Joseph took Mary “his wife,” indicating both St. Matthew and an archangel considered this couple married even though they were said to be “betrothed.” “Betrothed” is obviously much more than “engaged.”

Moreover, months later we find Joseph and Mary travelling together to Bethlehem to be enrolled as a family according to the decree of Caesar Augustus, just before Jesus would be born. They were obviously married; yet, even then, they were still said to be “betrothed” (see Luke 2:5).

So let’s recap what have we have uncovered. First, Joseph had already taken his espoused “wife” into his home and was caring for her. Second, Scripture reveals him to be her legal husband and to have travelled with Mary to be enrolled with her as a lawfully wedded couple and family. Third, she was called St. Joseph’s “wife” by the angel of the Lord… and yet, they were still referred to as betrothed. - When Were Joseph and Mary Married?

It has also been the constant tradition of the Church that St. Joseph and Our Lady were married in a religious ceremony. This idea has been expressed in Sacred Art and the liturgy as well as in tradition itself.

The Golden Legend, which derives its account from the much older Gospel of Pseudo-Matthew, recounts how, when Mary was 14 and living in the Temple, the High Priest gathered all male descendants of David of marriageable age including Saint Joseph (though he was much older than the rest). The High Priest ordered them to each bring a rod; he that owned the rod which would bear flowers was divinely ordained to become Mary's husband. After the Holy Spirit descended as a dove and caused Joseph's rod to blossom, he and Mary were wed according to Jewish custom. The account, quoted in its entirety, runs thus:

When [Mary] had come to her fourteenth year, the high priest announced to all that the virgins who were reared in the Temple, and who had reached the age of their womanhood, should return to their own, and be given in lawful marriage. The rest obeyed the command, and Mary alone answered that this she could not do, both because her parents had dedicated her to the service of the Lord, and because she herself had vowed her virginity to God.... When the high priest went in to take counsel with God, a voice came forth from the oratory for all to hear, and it said that of all the marriageable men of the house of David who had not yet taken a wife, each should bring a branch and lay it upon the altar, that one of the branches would burst into flower and upon it the Holy Ghost would come to rest in the form of a dove, according to the prophecy of Isaias, and that he to whom this branch belonged would be the one to whom the virgin should be espoused. Joseph was among the men who came.... [and he] placed a branch upon the altar, and straightaway it burst into bloom, and a dove came from Heaven and perched at its summit; whereby it was manifest to all that the Virgin was to become the spouse of Joseph.

In fact, neither the Golden Legend nor any of the early apocryphal accounts describe the actual ceremony, and they differ as to its timing, other than that it preceded the "Journey to Bethlehem". It is unclear whether this story was set before or after the Annunciation which, in the New Testament account, occurred after their betrothal but before their marriage. In the Gospel of James it comes after the Annunciation, but in the Gospel of Pseudo-Matthew, the primary source in the West, it comes before it. - Marriage of the Virgin

A feast in honour of The Espousals of the Blessed Virgin Mary or Marriage of the Virgin Mary was celebrated in certain parts of the Roman Catholic Church among certain congregations such as the Oblates of St. Joseph. It was removed from many local calendars by the Sacred Congregation of Rites. It was formerly generally observed on January 23.

The first definite knowledge of a feast in honour of the espousals of Mary dates from 29 Aug., 1517, when with nine other Masses in honour of Mary, it was granted by Leo X to the Nuns of the Annunciation, founded by Sainte Jeanne de Valois. This feast was celebrated on 22 October as a double of the second class. Its Mass, however, honoured the Blessed Virgin exclusively; it hardly mentioned St. Joseph and therefore did not correspond to the idea of Gerson. Also purely as a feast of Mary it appears in the Missal of the Franciscans, to whom it was granted 21 Aug., 1537, for 7 March (double major). About the same time the Servites obtained the feast for 8 March. The Office of the Nativity of Mary was recited, changing the word Nativilas to Desponsatio. After the religious orders, among the dioceses which adopted the feast of the Espousals of Mary, Arras takes the lead. It has been kept there since 23 Jan., 1556. - Espousals of the Blessed Virgin Mary

In Matthew 1:16, Joseph is described as the husband of Mary. It is probable that Joseph and Mary were betrothed at Nazareth. The term "betrothal" indicates more than an engagement. It was customary to celebrate marriage in two stages, the first that of the contractual arrangements culminating in consent or "betrothal". After a period of perhaps one year in which preparations were made to establish a new home together, the second stage of actually conveying the wife to that home would be accompanied by a great feast such as that recounted in the Gospel of John as the Marriage Feast at Cana (Jn 2:1-11). 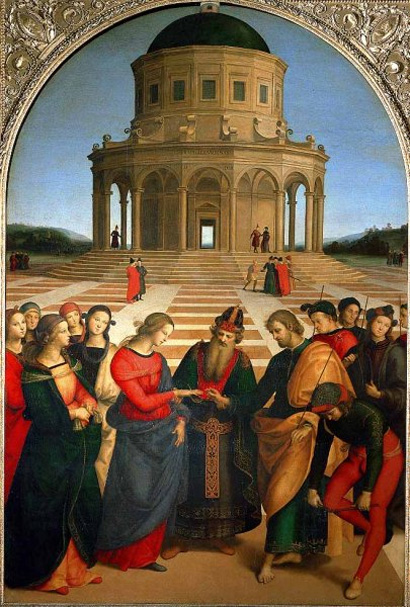 The Marriage of the Virgin (Raphael in 1504)

Not the answer you're looking for? Browse other questions tagged catholicism gospel-of-matthew virgin-mary marriage gospel-of-luke .

7
Why didn't Mary tell Joseph what Gabriel had said to her?
1
What was the nature of the miracle experienced by Zacharias & Elizabeth?
6
How far advanced was the Virgin Mary's Pregnancy when she returned to Nazareth?
4
Why was St. Joseph given instructions in dreams? (Roman Catholic perspective)
3
According to Protestants, why was Mary troubled at the greeting of Gabriel?
4
Did Mary stay with Elizabeth till the birth of John the Baptist?
0
Was St. Joseph always a righteous man?
3
How did Mary know after the Annunciation that she would be accepted as wife by Joseph?