I happened to learn that Christian black/death metal bands, along with their niche community were a thing, and was curious when this started and what lead to such a movement, especially since the combination seems so fascinatingly oxymoronic. Is there actually a known rationale/history behind how Christian Death Metal came to be?

Christian metal, white metal, Jesus metal or heavenly metal emerged in the late 1970s as a means of evangelization to the wider heavy metal music scene and was pioneered by the American Resurrection Band and Barnabas, the Swedish Jerusalem, and Canadian Daniel Band.

This Christian sub-culture eventually saw the development of Christian Death Metal arise in the 1990s.

Christian metal bands exist in most of the subgenres of heavy metal music, and the only common link among most Christian metal bands are the lyrics. The Christian themes are often melded with the subjects of the genre the band is rooted in, regularly providing a Christian take on the subject matter. It has been argued that the marginal yet transnational Christian metal subculture provides its core members with an alternative religious expression and Christian identity, and that the music serves the purpose of offering a positive message through lyrical content. This may not necessarily show a direct connection or reference to the Christian faith but often it does.

Christian metal emerged in the late 1970s as a means of evangelization to the wider heavy metal music scene and was pioneered by the American Resurrection Band and Barnabas, the Swedish Jerusalem, and Canadian Daniel Band. Los Angeles' Stryper achieved wide success in the 1980s. In the mid to late 1980s, extreme metal genres were popularized by bands such as Vengeance Rising, Deliverance, Believer and Tourniquet. In the early 1990s, the Australian death metal band Mortification rose to prominence within its country's underground metal scene. At the turn of the 21st century, the nu metal band P.O.D, with two platinum-selling albums, achieved a mainstream commercial success rivaling that of Stryper. The metalcore groups Underoath, Demon Hunter, As I Lay Dying and Norma Jean (dubbed "The Holy Alliance" by Revolver Magazine) also brought some mainstream attention to the movement in the first decade of the 2000s, achieving ranks in the Billboard 200.

In 1990, the Australian group Mortification became the first widely recognized Christian death metal band. Their 1992 album Scrolls of the Megilloth garnered the band some attention from the heavy metal underground, according to Allmusic.

At roughly the same time, the band Living Sacrifice was creating thrash and death metal, particularly on the albums Nonexistent (1992) and Inhabit (1994), with Allmusic commenting that "the term Christian death metal seems like one of music's most comical oxymorons." Later they "evolved from their early death metal-inspired rumblings into a crushing, staccato-driven, heavily percussive metallic behemoth that pummels listeners with intense riffage and a decidedly personal, though nevertheless, often evangelical lyrical viewpoint." The Minneapolis-based Crimson Thorn is described by Allmusic as "one of the world's most extreme-sounding Christian metal bands." Norwegian band Extol's 1998 album Burial was called "Revolutionary. This release may have single-handedly been responsible for the revival of the Christ-centered extreme metal." The band was popular among both Christian and general metal fans, mostly touring with well-known non-Christian bands. - Christian metal (Wikipedia) 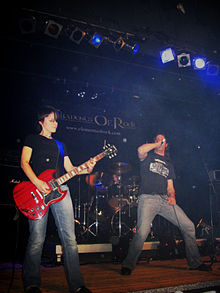 Not the answer you're looking for? Browse other questions tagged history culture music .

19
Source of Christian attitudes towards fantasy and role playing games
3
How is Christian worship different than Christian religion?
6
What was the Christian response to death-loving practices of Ancient Roman society?
9
Kids christian music from the 80's
7
How did early "street evangelization" differ from the modern practice?
2
When & where did the word "Christian" originate?
5
When did guitar led worship music become accepted?
1
Early 90s Jungle themed christian childrens Musical