To me this requires some explanation, even after many years of thought.

In the passage, Jesus says twice he hasn't come to bring peace; yet he is called Prince of Peace. This saying about the sword has never been mentioned in any church I've been to and it seems like Christians forget it, or want to forget it.

From the context, it is evident that he aims to bring division between those who are faithful and those who are not, even within the same family (hence the sword analogy- as though he is cutting between people) - but this doesn't seem to be consistent with the message of love that is preached to Christians and goes against the doctrine of loving your enemies.

What did Christ mean in Matthew 10:34 when he said that he did not bring peace, but a sword?

exegesis gospel-of-matthew
Share
Improve this question
edited May 4 '16 at 0:47

The sword is an important symbol in Christian imagery, and does not always symbolize war and violence. In fact, the sword is a definitive symbol of the word of God. In the context of the passage you cite, history teaches us that the word of God is a source of discord among men. Consider these passages from the New Testament:

(Hebrews 4:12 NASB) For the word of God is living and active and sharper than any two-edged sword, and piercing as far as the division of soul and spirit, of both joints and marrow, and able to judge the thoughts and intentions of the heart.

In this passage, the word of God is compared to a double-edged sword for its ability to penetrate to the core of the person- even to the source of his psychological (ψυχῆς) and spiritual (πνεύματος) being.

When Christ was presented at the Temple on the eighth day for circumcision, consider the blessing that Simeon, who the Scriptures call righteous, speaks over the infant Jesus while in the Spirit (speaking as a Prophet):

(Luke 2:26-35 NASB) And it had been revealed to him by the Holy Spirit that he would not see death before he had seen the Lord’s Christ. And he came in the Spirit into the temple; and when the parents brought in the child Jesus, to carry out for Him the custom of the Law, then he took Him into his arms, and blessed God, and said,

“Now Lord, You are releasing Your bond-servant to depart in peace, According to Your word; For my eyes have seen Your salvation,
Which You have prepared in the presence of all peoples,
A Light of revelation to the Gentiles,
And the glory of Your people Israel.”

And His father and mother [Joseph and Mary] were amazed at the things which were being said about Him. And Simeon blessed them and said to Mary His mother, “Behold, this Child is appointed for the fall and rise of many in Israel, and for a sign to be opposed— and a sword will pierce even your own soul— to the end that thoughts from many hearts may be revealed.”

Do you see how this use of the symbol of the sword is identical to that of the author of Hebrews? This sword that Simeon speaks of is not a sword of war, but the word of God that penetrates to the soul (ψυχὴν).

Paul, in his epistles, also compares the word of God to a sword:

(Ephesians 6:13-17) Therefore, take up the full armor of God, so that you will be able to resist in the evil day, and having done everything, to stand firm. Stand firm therefore, having girded your loins with truth, and having put on the breastplate of righteousness, 15 and having shod your feet with the preparation of the gospel of peace; in addition to all, taking up the shield of faith with which you will be able to extinguish all the flaming arrows of the evil one. And take the helmet of salvation, and the sword of the Spirit, which is the word of God.

The penultimate use in the New Testament Scriptures of the image of the sword is the most poignant and definitive- it is wielded by the resurrected and eternal Christ, ascended to the Father and filling the cosmos. Does he wield this sword in his hand or at his side? No, but instead the sword comes from his mouth; it is the very word of God:

Revelation 1:12-18 NASB Then I turned to see the voice that was speaking with me. And having turned I saw seven golden lampstands; and in the middle of the lampstands I saw one like a son of man, clothed in a robe reaching to the feet, and girded across His chest with a golden sash. His head and His hair were white like white wool, like snow; and His eyes were like a flame of fire. His feet were like burnished bronze, when it has been made to glow in a furnace, and His voice was like the sound of many waters. In His right hand He held seven stars, and out of His mouth came a sharp two-edged sword; and His face was like the sun shining in its strength.

When I saw Him, I fell at His feet like a dead man. And He placed His right hand on me, saying, “Do not be afraid; I am the first and the last, and the living One; and I was dead, and behold, I am alive forevermore, and I have the keys of death and of Hades.

It is important to note that the Epistle to the Hebrews, from which we cited the first passage, was written around 20 or 30 years before John penned his Revelation of Jesus Christ at Patmos. Either John read the epistle, which I don't find to be likely, or the double-edged sword that is the word of God is a common revelation.

In summary, the symbol of the sword is interpreted to be the word of God, that comes from the mouth of Christ. It is with this word that he cuts to the core of people, exposing their hearts. It is by the sword of his mouth, the word of God, that he makes war with the powers of evil and the nations that oppose him, and they are defeated- he strikes them down with the authority that he was given by the Father. Consider this final passage in closing.

(Revelation 19:11-16) And I saw heaven opened, and behold, a white horse, and He who sat on it is called Faithful and True, and in righteousness He judges and wages war. His eyes are a flame of fire, and on His head are many diadems; and He has a name written on Him which no one knows except Himself. He is clothed with a robe dipped in blood, and His name is called The Word of God. And the armies which are in heaven, clothed in fine linen, white and clean, were following Him on white horses. From His mouth comes a sharp sword, so that with it He may strike down the nations, and He will rule them with a rod of iron; and He treads the wine press of the fierce wrath of God, the Almighty. And on His robe and on His thigh He has a name written, “KING OF KINGS, AND LORD OF LORDS.”

Why did Christ say he came as a sword?

In context Jesus is talking about the difficulties following him will cause those followers. The social pressure to deny him will be great. However, Jesus says that such denial will be reciprocated by him in front of the Father.

In expanding upon this theme he compares himself to impact a sword can have. He is telling those that follow him that they can expect revulsion and hatred from others, even those in their own family. Using the imagery of a sword to illustrate the disrupting influence following Jesus will cause is a fair illustration. Consider what he told his disciples;

The answer to your question is hinted at in the scriptural verses prior to Matthew 10:34 (1-33) and in a tiny fragment from the NT that is the oldest part of the NT ever found.

These twelve Jesus sent forth... preach, saying: The kingdom of heaven is at hand... I send you forth as sheep in the midst of wolves... they will scourge you in their synagogues... whoever shall deny me before men, him will I also deny before my father, which is in heaven. Think not that I come to send peace on Earth."

The oldest part of the NT is in a tiny fragment

A tiny papyrus fragment from the book of John is held in Manchester, England at the John Rylands Library (pdf) -one of eight libraries that are part of the University of Manchester Library (pdf). It's called "P52," -the "p" is for "papyrus." A photo of it behind glass in the library is at the bottom of this page. I am unable to get a photo directly from the library's website but I did find it here: (pdf)

"I am the way, the truth, and the life: no man cometh unto the Father, but by me."

Essentially, "the word" (John 1:1) spoken from the one who is "the truth" (John 14:6) is like a sword when it's heard by those that are not "of the truth" (John 18:37) -those that lack faith in Christ. Above, Andrew also gave references for this. The sword can be compared to how we, today, say: "The truth hurts." He is still "the prince of peace" to those receiving him.

The "verso" side (back side) of the fragment is from John 18:37. The verses on papyrus are in bold. 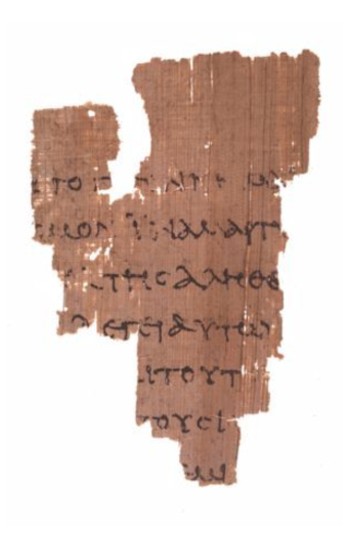 a King I am. For this I have been born

testify to the truth. Everyone who is of the truth

hears of me my voice.” Said to him

Pilate, “What is truth?” and this

having said, again he went out unto the Jews

and said to them, “I find not one

The photo of P52 in the John Rylands Library below shows the "recto" side (front side). The Greek and the translation (pdf) for the front side is below the image. The verses on papyrus are in bold. 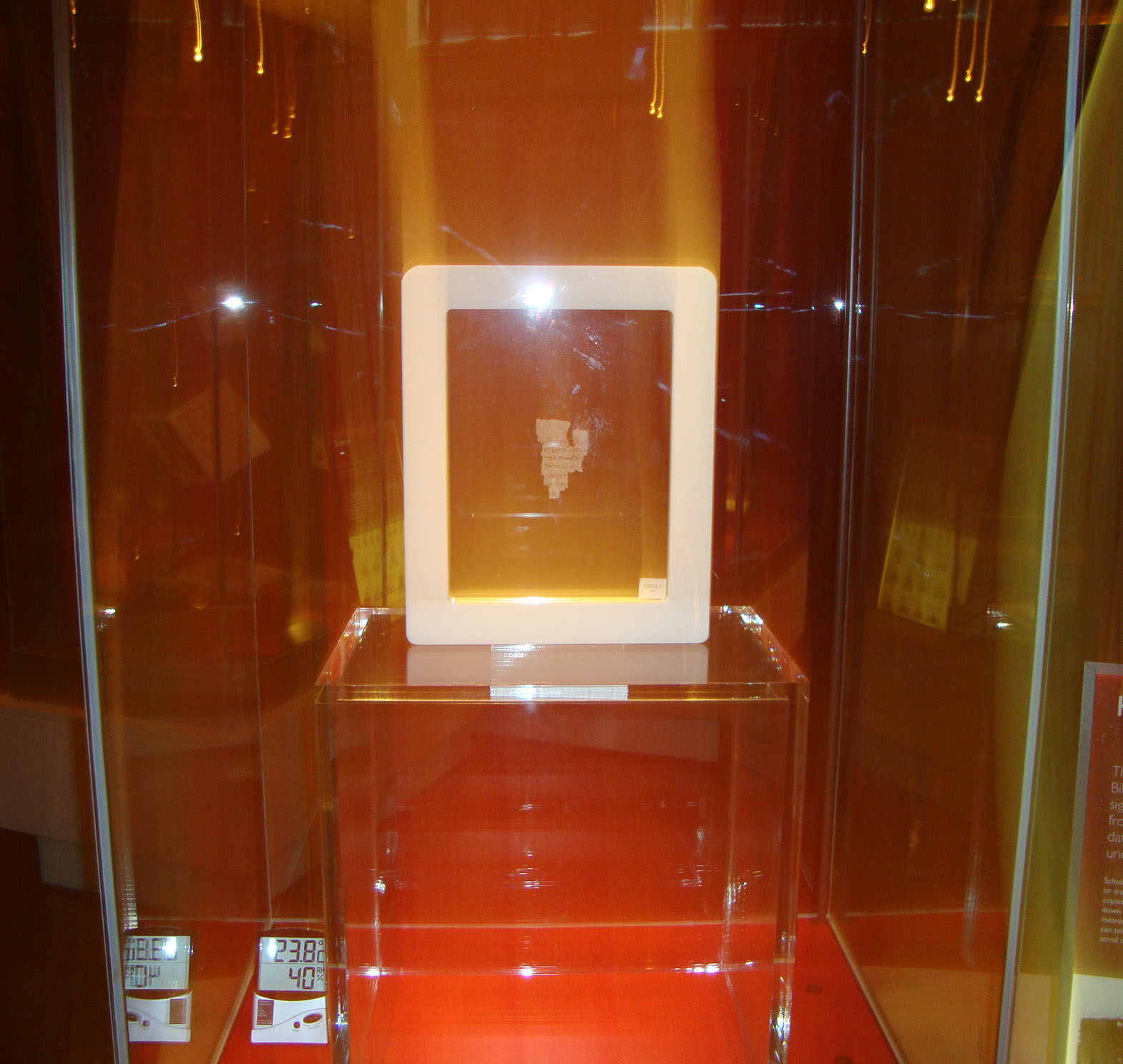 the Jews, “For us it is not permitted to kill

anyone,” so that the word of Jesus might be fulfilled, which he sp-

oke signifying what kind of death he was going to

and said to him, “Thou art king of the

Not the answer you're looking for? Browse other questions tagged exegesis gospel-of-matthew or ask your own question.

5
Malachi 4:6 vs Matthew 10:35: did Jesus come to reconcile parents and children or the reverse?
5
Did Jesus mean that heaven and earth would actually pass away in Matthew 24:25?
1
What is the Christian Reformed Church in North America's views about Luke 14:32 with regard to the doctrine of discipleship?