ESV verse removed? Where are the explanations found?

I was wondering where I can find the actual simple online reasons for the removal of the "accepted" verses in the KJV, in the ESV bible version listed on this site, because I have not found them so far, Thanks.

The alteration, omission and addition of words in the Greek text is being highlighted by that site. They are comparing the Textus Receptus, the 'Received Text' (on which the KJV is based) to the Westcott & Hort/Nestle Aland Greek text (on which the ESV is based).

Scrivener's text of 1881 shows clearly the differences between the two Greek texts.

The main difference between the two is that Codex Sinaiticus and Codex Vaticanus are given very significant weight in the W&H/NA Greek text.

One excellent online resource for Bible translation comparisons is BlueLetterBible (https://www.blueletterbible.org/). It allows you to search for a verse and to compare across translations. Footnotes are included.

I chose as an example from https://www.scionofzion.com/esv_exposed.htm Matthew 18:11, which is contained in the KJV but is omitted from ESV, NIV, NRSV, and others. BlueLetterBible (https://www.blueletterbible.org/kjv/mat/18/11/t_bibles_947011) shows footnotes from several translations that say that verse 18:11 was either added to or omitted from some ancient manuscripts.

Referring to The New Interpreter's Bible Commentary (10 volumes, from my bookshelf), it states:

18:11. This verse is absent from the oldest and best MSS representing several textual families and geographic locations. There can be little doubt that the verse was later added to Matthew from Luke 19:10 in order to supply what seemed to be a missing connection to the following parable. As we shall see, the continuity is already present.

Another excellent online resource is BibleGateway (https://www.biblegateway.com/). BibleGateway includes a large number of translations. BibleGateway has an "Add parallel" feature that allows you to compare verses or passages from two translations side-by-side.

MinistryMatters (https://www.ministrymatters.com/library/) has a library of Bible study resources. Some are free. Others are available for a fee.

One point to consider is that any declaration of the King James Version as authoritative above all other translations is to deny 400 years of Bible scholarship, including more recently discovered texts such as the Dead Sea Scrolls, which provide valuable insight into textual translation and interpretation. For scholarly Bible study, the NRSV is preferred in many settings. 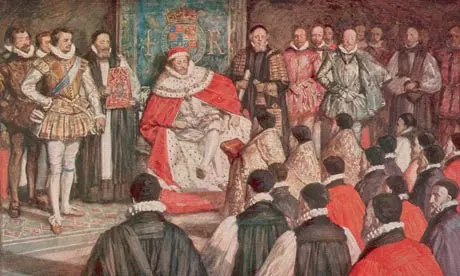 The Translators Presenting the Bible To James I, George E Kruger

As its introduction states, the textual basis of the ESV New Testament is the 28th edition of the Nestle-Aland eclectic Greek text, sometimes called the "Critical Text" (CT). The CT is called "eclectic" because it is not an actual text that was ever used in the Church, but is rather a splicing together of a very large number of Greek manuscripts spanning over a millennium.

When a verse that is in the King James Version is not in the ESV, it is almost certainly because that verse is missing from the CT, but is in the so-called "Textus Receptus" (TR) - the Greek text that is supposed to be the basis of the KJV. The same holds true to verses that appear differently: it is probably because the verse in the CT is different from what is in the TR.

The Textus Receptus or (TR) is essentially a hypothetical text: We don't have exactly the same manuscripts that the King James translators used between 1604 and 1611. The Scrivener 1881 edition is thought to be closest to what the translators actually consulted.

The United Bible Society has published a book by Bruce Metzger entitled A Textual Commentary on the Greek New Testament. The book discusses reasons why the Nestle-Aland editors chose to omit certain verses or adapt the Greek variant they did. For example, the entry for Romans 16:24 (in Dr. Matto's list that you linked) reads:

The earliest and best witnesses omit ver. 24. See the comment on ver. 20.

The shorter form of the benediction (𝔓46 א B 1881) appears to be more primitive, for if Χριστοῦ (A C P Ψ 33 81 1739 Byz all versions) were present originally there seems to be no reason why a copyist should have deleted it, whereas the general tendency was to expand liturgical formulations. Several Western witnesses (D G itd*, Sedulius Scotus) transfer the benediction to follow ver. 23, thus preventing the greetings of verses 21–23 from having the appearance of being an afterthought. Other witnesses (P 33 104 256 263 436 1319 1837 syrp arm) place ver. 24 following 16:27 (i. e. after the doxology), thus concluding the epistle with a benediction. If, however, it stood in this position originally, there is no good reason why it should have been moved earlier.

As you can see, the explanations can be quite technical. Another example, this time for Mark 15:28:

The earliest and best witnesses of the Alexandrian and the Western types of text lack ver. 28. It is understandable that copyists could have added the sentence in the margin from Lk 22:37, whence it came into the text itself; there is no reason why, if the sentence were present originally, it should have been deleted. It is also significant that Mark very seldom expressly quotes the Old Testament.

And so on for the other verses in Dr. Matto's list.

To add a little more confusion, there is actually a third Greek text compilation that originated within the Eastern Orthodox Church (as do virtually all the individual Greek manuscripts in existence) called the 1904 Patriarchal Text (PT). In most cases it tends to agree with the Textus Receptus when there is a difference between the TR and CT, but in a few cases it agrees with neither the TR nor the CT. To my knowledge there are only two translations of this text into English: the Eastern Orthodox Bible, translated by Laurent Cleenewerck; and the Orthodox New Testament, translated by Holy Apostles Convent.

Not the answer you're looking for? Browse other questions tagged textual-criticism esv .

14
Why are some verses missing in the NIV?