The primary and most well-known work in LDS scripture. 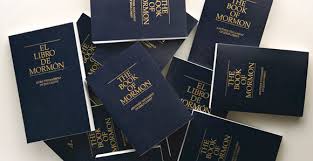 The Book of Mormon is a volume of holy scriptures cherished by members of The Church of Jesus Christ of Latter-day Saints (Mormons).

A brief explanation on mormon.org states

The Book of Mormon is another witness that Jesus Christ really lived, that He was and is God’s Son. It contains the writings of ancient prophets. One of these, Lehi, lived in Jerusalem around 600 B.C. God commanded Lehi to lead a small group of people to the American continent. There they became a great civilization.

God continued to call prophets among these people. The Book of Mormon is a collection of the writings of their prophets and record keepers. It is named after Mormon, one of the last of these ancient prophets.

These prophets knew about Heavenly Father’s plan for His children and the mission of Jesus Christ. They recorded that Christ appeared, after His Resurrection, to the people in America, taught them His gospel, and formed His Church among them. The book contains the teachings of Jesus Christ, testifying of His Atonement and His love. It supports and verifies the Bible.

The Book of Mormon concludes with a great promise that those who read it and sincerely pray about it can know by the Holy Ghost that it is true (Moroni 10:4).

What important Mormon doctrines are taught in the book of Mormon that we couldn't find in the Bible already?

How many witnesses are there who physically saw and/or touched the golden plates from which the Book of Mormon was reportedly translated?

How is one supposed to “know” whether or not the Book of Mormon is true?

Why did Joseph Smith translate the Book of Mormon into Jacobean English, not in use in 1830?

In Jerusalem around 600BC, who was Laban?