What makes a confession sacramental?

In the Catholic tradition, confession to a priest is treated with special protection as a sacred rite. The priest is charged with maintaining the confidential nature of the confession, something they take very seriously. However, not everything ever said to a priest is said as part of an official confession.

When is a confession considered sacramental and when is it ordinary? Is there some kind of instantiation procedure to switch to a confession if chatting with a priest? Is it possible to use the language of confessing a sin in the hearing of a priest and not have it be sacramental? Does place matter?

You know you're in confession if:

The most relaxed (and personally awful) confession I ever did was in the middle of a conversation. The priest merely whipped out his stole, told me that if I wanted more grace I should kneel and I told him all the awful things I was probably going to tell him anyway.

Let me know if you want a more canon law answer, rather than an anecdotal one. I don't think there's any mistaking when you're in confession, the most telling part is the absolution, but if you don't get absolution for whatever reason, I doubt you didn't know you went to confession.

The normal for of confession, according to the handbook of prayers (which is not a liturgical text, but a guide for the laity) is that confession begins with "bless me father... And it's been x number of days since my last confession" then you rattle off your calumnities and the priest gives you a little advice and asks if you're really sorry (you say yes, I don't want to know what happens if you say no, always say yes). Then the priest (acting in persona Christi) absolves you of your sins and you say an Act of Contrition (O my God I am heartily sorry, etc...) and the priest gives you some penance (usually a number of prayers to be prayed in earnest nowadays, although in the past, the punishement fit the crime) the most penance I've ever had was flowers and a date night. Then you leave feeling refreshed in body and soul. (Unless you did something dumb or self righteous in the confessional, then you feel worse than you can possibly imagine. But it's not so bad, you remind yourself, same absolution same succor of Heaven.

In the sacrament of penance the faithful who confess their sins to a legitimate minister, are sorry for them, and intend to reform themselves obtain from God through the absolution imparted by the same minister forgiveness for the sins they have committed after baptism and, at the same, time are reconciled with the Church which they have wounded by sinning.

Like all the sacraments, Penance is a liturgical action. The elements of the celebration are ordinarily these: a greeting and blessing from the priest, reading the word of God to illuminate the conscience [note: I don't ever remember this being a part of any of my confessions] and elicit contrition, and an exhortation to repentance; the confession, which acknowledges sins and makes them known to the priest; the imposition and acceptance of a penance; the priest’s absolution; a prayer of thanksgiving and praise and dismissal with the blessing of the priest.

(Catechism of the Catholic Church, paragraph 1480)

It is apparent from these two quotes that the first important aspect of confession (that is, of talking to a priest about one's sins) as Confession (that is, as the Sacrament of Confession) is the penitence of the penitent, the one who is admitting sin. Without sincere and deep sorrow for one's sins, and a desire to perform penance for them, an admission of sin is no more than an admission. The priest may or may not understand from such an admission (perhaps considering the individual's general demeanor as well) that one desires Confession; that's a pastoral judgment call. There's no specific "language of confessing a sin" that will of itself signal to the priest that Confession is being requested, short of a straightforward request like "Could you hear my Confession?" (Of course, the priest could initiate that on his part: "Would you like me to hear your Confession?")

Place is not an issue: for example 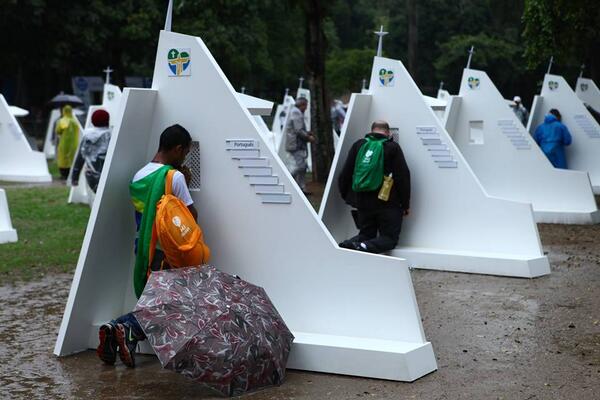 And the Pope himself: 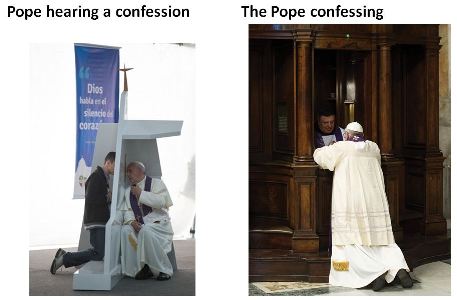 Do note a few things, though:

Thus the quick answer is:

As Gregory says [Isidore, Etym. vi, ch. 19], "a sacrament consists in a solemn act, whereby something is so done that we understand it to signify the holiness which it confers." (source).

In order for a sacrament to be valid, all the following are necessary:

The proper matter for confession are "the acts of the penitent, the matter of which acts are the sins over which he grieves, which he confesses, and for which he satisfies." (source).

The proper form for confession is, at the bare minimum, "I absolve thee." (source).

The confession is automatically invalid if it lacks either or both of these.

As far as I know, what makes a confession sacramental, so that the seal of the confessional applies to it, is that the penitent asks the priest for absolution. Even if the priest refuses absolution, he is still prohibited from revealing what he heard in that confession. Purple stoles, lines, and green and red lights are often involved, but I don't think the lack of any of them would make the confession not sacramental.

EDIT: A more authoritative answer, from Section 503 of "Moral Theology" by Fr. Heribert Jone (a book that was recommended to me by a traditional Catholic piest, and which I therefore consider reliable): "Sacramental confession consists in the telling of our sins to a duly authorized priest with the intention of being absolved by him."

Note that, in my original answer, "asks the priest for absolution" was apparently too restrictive; it suffices that the penitent has the intention of being absolved.

Not the answer you're looking for? Browse other questions tagged catholicism sacraments confession or ask your own question.

16
Do Catholic priests have to report child abuse confessed in secret?
10
According to the Catholic Church, does abortion need to be confessed, and is it a mortal or venial sin?
5
What is considered chaste behaviour from a Catholic perspective?

15
Are non-Catholics allowed to go to confession?
6
What is the basis for penance (satisfaction) in sacramental confession?
4
How do Catholics view physical and digital copies of the Bible?
5
Why wouldn't a practicing Catholic joke about the Sacraments and what would happen if they did?
4
Can Catholic priests disclose the fact that someone has seen him for confession?
3
The history of the Confession sacrament
3
If a priest makes a major mistake during confession, can he later talk to the person to correct themselves?
4
Why do the faithful have to say “And with your spirit ” in the Catholic Mass?
2
Are Catholics allowed to believe that the EF or OF is objectively more reverent than the other?