What distinctive kinds of Bible translations are there?

Obviously there is a lot decisions and elbow-grease that go into producing any Bible translation. I hear a lot of different terms used to describe the different methodologies that guide those decisions such as literal, word-for-word, figurative, dynamic equivalence, formal equivalence, paraphrase, simplified, and at least a dozen others.

Can somebody unscramble these and try to bring some order to the relations between them. If it is possible to group an of them and gives specific examples of how different methodologies are compatible or at odds that would be lovely. If there is some kind of sliding scale between different ends of the spectrum, please describe what that spectrum is.

Let's try to avoid preferences about what we think are the best kind of translation, but expand on the motivations for each. I have strong opinions but will try to make my choice of "right" answer based on how well different methodologies are represented, not based the priorities I use in choosing a translation.

Biblical translation is a difficult task because you're trying to get words and meaning out of 1900+ year old text and make it intelligible to people today in their own native language.

Because of this, translation kind of becomes a spectrum. On one end, you have word-by-word translation while on the other end you have a paraphrase meant for everyone to understand.

Here are the three broad categories:

1. This is a link to the primary source article. 2. All links above go to the respective translations of John 3:16

That simply tells you the types of translations there are. There are many different types of bibles, however, each of which may have multiple translations.

For example, the Life Application Bible (which I heartily recommend, by the way) can be found using the NIV, NKJV, or NLT translations. While the translation of the sacred text is common among bibles, the extra notes regarding the text vary greatly.

There's one specific translation that I want to use as an example. It's called the Apostolic Bible. It's a type of "polyglot" bible (which literally means many tongues, or multiple languages) that contains both the original language and the English translation. (It also contains the Strong's Concordance reference number for each word.)

It's a fantastic example of a word-for-word translation: 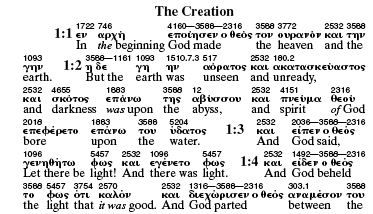 Here I focus on the motivation for different Bibles.

The discussion on literal, word-for-word, figurative, dynamic equivalence, formal equivalence, paraphrase, simplified, bibles obscures the fact that the theology can be quite different between bibles. And the theological differences are much more a problem than the language itself. The schism in the Episcopal Church in 1970, which caused many Bishops and congregations to leave the ECUSA was due primarily to the change in Bible and Prayer book use, because the newer books had changed the theology in a way totally unacceptable to many of the Priest and Laity.

A similar thing is happening today with the Episcopal Church ( I am sure something similar is happening in other religious groups ) where traditional liturgy is being changed without the approval of the laity. In recent years the Bible has been changed, and the prayer book revised. People are hanging onto their traditional texts, and prayer books, and whole communities are moving to new locations so they can keep using their traditional books.

The Anglican Communion worldwide is very troubled by what is happening to the Episcopal Church in America. And they blame it on the changes made to the doctrine in America. ECUSA has written new bibles and new prayer books to suit the new doctrine.

Each biblical tradition has passages and books that don’t appear in the others. Every group of translators has a specific agenda, given by their Church, to slant the translation towards a doctrine taught by that Church. That’s why the Protestant Bibles are different from the catholic bibles, the Anglican Bibles, and the Orthodox Bibles. There are even bible versions aimed at specific religious groups. In fact, these days, people can find a Bible for their specific Church ideology - the Pastor will recommend it.

The reason publishers offer literal, word-for-word, figurative, dynamic equivalence, formal equivalence, paraphrase, and simplified, bibles is not to make it easier to understand - some in fact really muddy up the theology, but to obscure the fact that the theology has been altered from the tradition in order to suit the aims of the church. [Prosperity theology cannot be supported from the KJV or the DRV.]

My preliminary advice is to use the Bible your Pastor recommends - at least you will be hearing the same theology and can discuss it. In the discussion you will be inspired - as we always are when hearing the word of God - and you will experience God.

If you are a scholar, and want to understand Jesus, then find the traditional bibles that have stood the test of time. If the language seems hard, the meaning, when you get it, will be as close as you can get to what Jesus taught.

There are some very poor translations, done by people who had no classical Greek learning - only NT Greek. You need to look for translators who are experts on ancient Greek and Hebrew. If the frontispiece doesn't list the translators, and the book doesn't have a pedigree, then go look for something that does.

Not the answer you're looking for? Browse other questions tagged bible-translation .

39
Why are there so many translations of the Bible?
18
What process was used to translate the KJV?
9
How can one judge how accurate a given Bible translation is?
9
How could Cain have built Enoch?