Why is the fish often used as a symbol of Christ?

In the United States, you've probably seen it. Many Christians like to put a fish on their cars to show their faith.

What is the origin of this symbol?

The fish or "Ikthyus" is Greek, is a very ancient symbol. In addition to the obvious parallels with Jesus commissioning the disciples as "fishers of men," there was another reason for using the fish.

Before the 4th. cent. the name of the Lord, and of God were considered to be too sacred to be written down anywhere. So these names do not appear in the early Bibles. Instead "nomina sacra" were written. Whenever The Master was referenced in the Gospel it was usually written as IC with a bar over it to identify it as a metaphor. When the Gospel was read to the followers a non-sacred name was spoken in its place, such as (from the NT) Master (Jo 4:31), Rabbi (Jo 1:38), or Teacher (Jo 3:2). You will notice that in the NT no disciple ever calls the Master by His sacred name. Only those possessed by devils called Him by name Mt 8:28 (having unclean spirit Mr 5:2 - 14.)

The Fish was another metaphor which could be written or painted without being sacrilegious.

Why is the fish often used as a symbol of Christ?

The word ichthus or fish in Greek is symbolic of Jesus.

In Hellenistic Greek, the word Ichthus (aka Ichthys or Ikhthus) means fish. It is composed of two intersecting arcs. One end of both arcs extends beyond the meeting point, creating the profile of a fish. The fish is a very significant symbol for Christians. Literally, the word Ikhthus means Jesus (I) Christ (KH), God’s (TH) son (U), Savior (S). More informally, it is known as the “sign of the fish”. Jesus Christ and His apostles were known as “fishers of men”.

The symbol is believed to have been used in earlier times as a secret symbol by which Christians knew they were in the company of a friend. For hundreds of years after Christ, it was dangerous to be a Christian because the pagan Roman Emperors persecuted them. When meeting a person for the first time, one would scratch half the image on a wall, a rock or on dirt and if the other person understood what it is, he/she would complete the symbol. 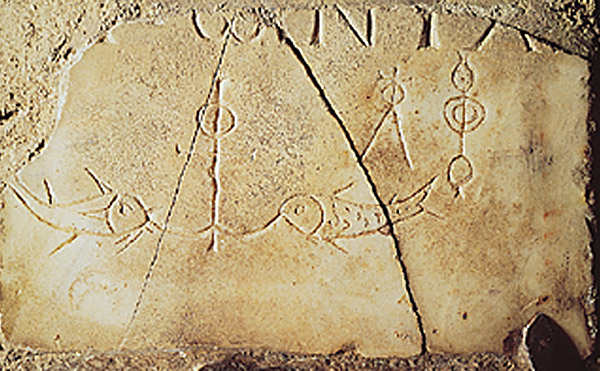 Shown here is a fragment from a third-century tombstone slab found in the catacombs of Rome. The fragment is inscribed with some of the earliest examples known of Christian symbols. The fish remains a symbol of Christianity to this day. "Ichthus," the Greek word for fish, is an acronym for the Greek words that mean "Jesus Christ, Son of God, Saviour." The anchor, positioned between the two fish, had long been a symbol of safety among sailors. Christians adopted it as a symbol of hope of a future life, and it is seen on many early Christian tombs. - Early Christian Symbols

Not the answer you're looking for? Browse other questions tagged symbolism or ask your own question.

5
Relevance of the word 'ICTHUS'

15
Christian significance of Tolkien and C. S. Lewis putting “heaven” across the sea?
5
What is this symbol (cross with P loop atop)?
5
Relevance of the word 'ICTHUS'
20
What is the purpose and meaning of the Christian Flag?
3
Why are many protestants hesitant of the reappropriation of symbols?
16
What is the symbolism of the Peacock?
7
What does this Catholic symbol mean?
6
Why is the Ichthys symbol almost always facing left?