The role of monks and their appellation in 18th century?

A public execution took place in Toulouse, in an officially Catholic state, in the 18th century, France. A Protestant father, Jean Calas, was sentenced to death on the ground that he had murdered his son who turned a Catholic. I have a question about the words, a monk and a Father, in a description of Adam Smith who witnessed this execution (See the bottom of this thread).

First, a monk usually lives in a monastery he belongs to and remains there for doing meditation or exercise together with other monks. I am aware that there are two types of monks: choir ones who are ordained, and lay /claustral brothers who are not ordained. Can a choir monk leave his monastery and take part in a public execution to hear the last confession from an inmate?

Second, can a choir monk be eligible to be called Father as a qualified priest? Is there any other specific appellation than Father when you call a choir monk? 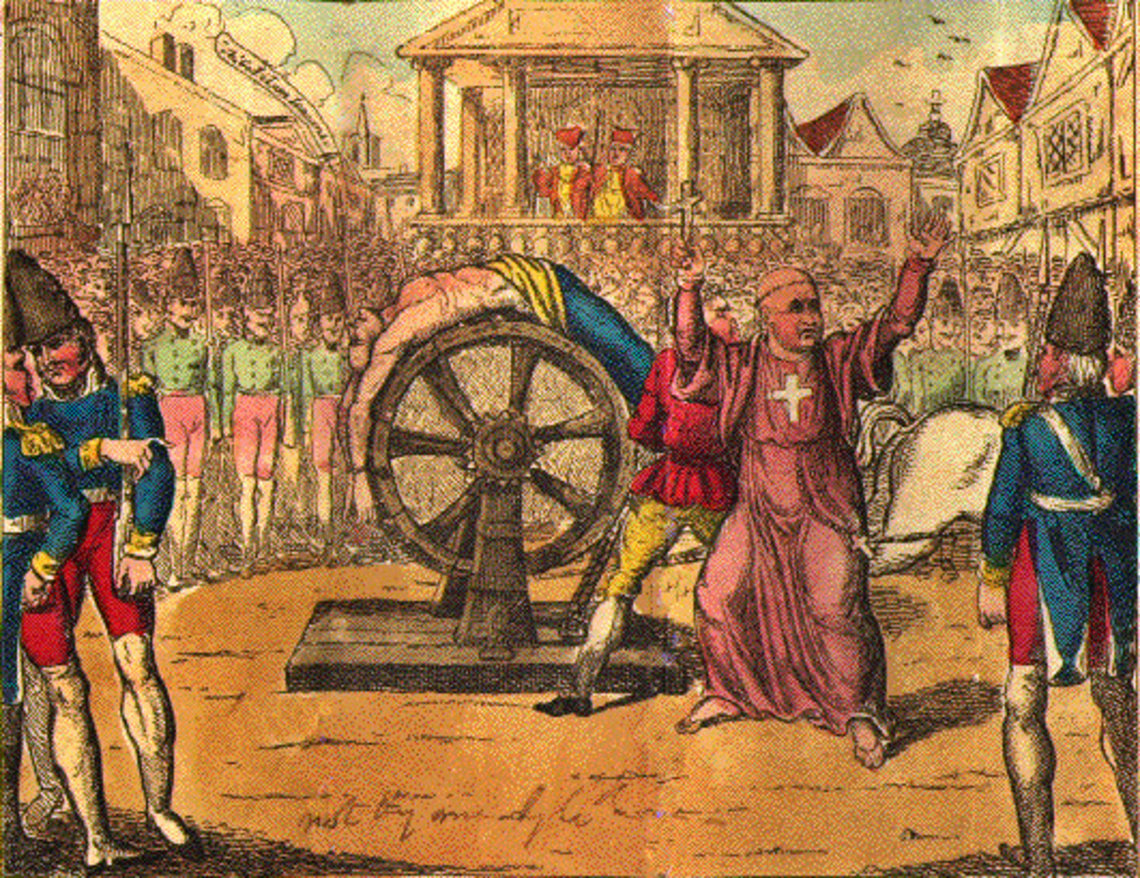 Third, there is an image depicting this execution where a monk or a friar wears reddish-brown monastic dress with a large white cross on his chest. The image comes from the frontispiece of a chapbook published in England soon after the execution. Voltaire also wrote about the Calas affair, disclosing the specific names of the priests attending the execution: “Father Bourges, a Dominican and a professor of divinity, together with Father Caldagues, a priest of the same order, were appointed to assist him [Calas] in his last moments.” The colour of the Dominican robe is usually all white, but is there a type of Dominican robe depicted in the image? Is it a sheer fictional robe invented by an Englishman?

After he had been broke, and when just going to be thrown into the fire, the monk, who attended the execution exhorted him to confess the crime for which he had been condemned. My father, said Calas, can you bring yourself to believe that I was guilty? [III.2.11] Adam Smith, The Theory of Moral Sentiments (Oxford: Oxford University Press, 2014) 120.

The role of monks and their appellation in 18th century?

Technically speaking Dominicans are clerical canons and are called friars and not monks. They live in convents and not monasteries. Typical Dominican priests generally remain in their respective convents for six months of the year and preach the faith to the people for the other six months of the year. Nowadays variations to these time frames varies according to various situations.

The Order of Preachers, also known as the Dominicans, is an order of the Catholic Church founded in Toulouse, France, by the Spanish priest Dominic of Caleruega. It was approved by Pope Honorius III via the papal bull Religiosam vitam on 22 December 1216. Members of the order, who are referred to as Dominicans, generally carry the letters OP after their names, standing for Ordinis Praedicatorum, meaning of the Order of Preachers. Membership in the order includes friars, nuns, active sisters, and affiliated lay or secular Dominicans (formerly known as tertiaries, though recently there has been a growing number of associates who are unrelated to the tertiaries).

Founded to preach the Gospel and to oppose heresy, the teaching activity of the order and its scholastic organisation placed the Preachers in the forefront of the intellectual life of the Middle Ages. The order is famed for its intellectual tradition, having produced many leading theologians and philosophers.

In England and other countries, the Dominican friars are referred to as Black Friars because of the black cappa or cloak they wear over their white habits. Dominicans were "Blackfriars", as opposed to "Whitefriars" (i.e., Carmelites) or "Greyfriars" (i.e., Franciscans). They are also distinct from the "Austin friars" (i.e., Augustinian Friars) who wear a similar habit. 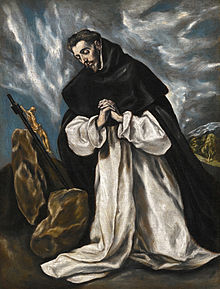 A priest of the Dominican is typically addressed as ”Father”. The Lay Brothers normally remained in the convents to maintain to the needs of the community: cooking, sewing, etc. Although dressed in a all white habit, the put on a black cape while outside of the convent. Dominicans are not choir monks in the least.

And yes, choir monks, such as Benedictine monks, may leave their monasteries and are usually addressed as ”Father” also.

The image in your question is historically inaccurate in making a Dominican dressed in a red habit. This is pure fiction. 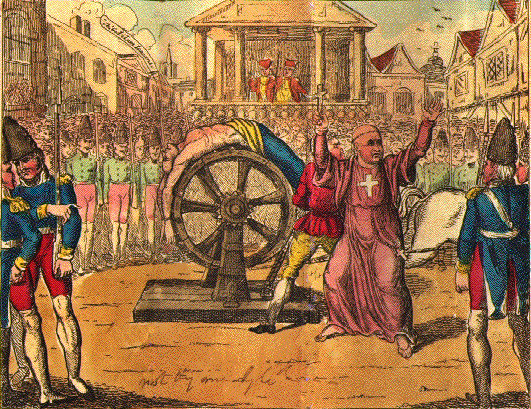 Jean Calas (1698 – 10 March 1762) was a merchant living in Toulouse, France, who was tried, tortured and executed for the murder of his son, despite his protestations of innocence. Calas was a Protestant in an officially Catholic society. Doubts about his guilt were raised by opponents of the Catholic Church and he was exonerated in 1764. In France, he became a symbolic victim of religious intolerance, along with François-Jean de la Barre and Pierre-Paul Sirven.

It should be noted that his trial and execution was done by the state authorities and the Church did not take part in the condemnation of Jean Calas. Unfortunately it occurred in a Catholic State and when tolerance of other religions was not a true it’s best.

The Catholic Encyclopedia has this to say about his condemnation:

The Calas Case was not without its effect on contemporary art and literature. Over a hundred publications relating to it are in existence. It forms the subject of many plays by F.-L. Laya (produced for the first time in Paris in 1790), Lemierre d'Argy (Paris, 1790), Marie-Joseph Chénier (Paris, 1791), and Victor Du Cange (Paris, 1819). Madame Calas and her daughters were living in Paris, when several of these were presented on the stage. Some historians, carried away perhaps by too great a desire to bring the innocence of Jean Calas to the fore, assert that Marc-Antoine committed suicide. But there are weighty reasons to doubt the father's innocence (Barthélemy). Voltaire cannot be considered an impartial historian of the case, owing to his preconceived desire to present a strong indictment against the Catholic Church, rather than to state the facts in their true light. The responsibility of the condemnation in no way rested with the ecclesiastical authorities, and the penalty was inflicted not for a mere religious offence, but for murder alleged to have been committed for a religious motive.

Many thanks for answering all the questions I have raised in the post. The detailed explanations given here has cleared up all my doubts about the role and the robe of Dominican friars. But at the same time, I feel sorry that the post contains many errors due to my lack of knowledge on Christian monastic tradition as well as usage of English language.

This was the first time for me to put up a thread on Christianity of Stack Exchange, but from now on I keep in mind the rule that one post should contain one question.

Thanks again for the explanations.

7
What role does the Vatican play in marriage annulments?
5
Does Catholicism confound the role of "elder" and "priest"?
5
What part do Monks play in the Christian church?
5
Why did Jesuits and Franciscans disagree about indigenous labor in their missions?
2
What is Penance and what has been its traditional role in the Catholic Church?
2
Why are the Trappist monks vegetarians?