Did Aquinas believe that church bells ward off bad weather?

An 1880 issue of Popular Science reports that, in the opinion of Thomas Aquinas,

church-bells, provided that they have been duly consecrated and baptized ... repel the demons and avert storm and lightening (p. 356)

The article seems to be quoting Aquinas here, but I cannot find such a quotation anywhere in Aquinas's corpus. Did Aquinas really write this?

St. Thomas did not write that. It's made-up by Rydberg, Magic of the Middle Ages (1879) pp. 73-74, cited in the anti-Catholic hit-piece by Cornell University co-founder Andrew Dickson White, History of the Warfare of Science with Theology in Christendom (1895), ch. 11 "The Prince of the Power of the Air" to Meteorology, §2 "Diabolic Agency in Storms", whose fn. 219 gives a completely spurious citation:

Summa Theologica I q. 80 a. 2 is on "Whether the sensitive and intellectual appetites are distinct powers"!

Did Aquinas believe that church bells ward off bad weather?

St. Thomas Aquinas as a faithful son of the Church would seem to have believed in this possibility.

I doubt one will find a clear quotation from Thomas Aquinas and his belief that Church Bells ward off bad weather. But there is a strong traditional belief in this and St. Thomas Aquinas would have known of this.

Starting with St. Paul the Apostle, we see that the demons seem to have some power to manipulate the forces of nature a create storms.

Wherein in time past you walked according to the course of this world, according to the prince of the power of this air, of the spirit that now worketh on the children of unbelief. - Ephesians 2:2

The well known former Chef Exorcist of Rome, Fr. Gabriel Amorth in his writings mentions that those things duly blessed by the Church and are sacramentals are indeed efficacious in warding of the demons and their influences. He also mentions that Gregorian Chant drives the demon away as it is uniquely sung a praise towards God.

Church Bells call men to pray. They announce the commencement of church services and weaken the demonic influences in the the immediate area.

If Satan could impact the weather, it would only be by God’s permission, and restrained, as in the case of Job. Satan was allowed by God to torment Job in order to test him, and this included “the fire of God” (probably lightning) which "fell from the sky and burned up the sheep and the servants" (Job 1:16). This was followed by a "mighty wind" (possibly a tornado) that destroyed his eldest son’s home and killed Job’s children (verses 18-19). So if the fire from heaven and the tornado were somehow caused by Satan, they were still under the ultimate control of God for His purposes. - Does Satan have the power to control the weather?

The ancient Benediction of Bells is quite impressive:

Since the beginning of the sixteenth century there has been much purposeless controversy over the question of the so-called "baptism" of the bells. Protestant critics, following the lead of Luther himself, have professed to find in the rite not only superstition but a profanation of the sacrament. But one might as well be scandalized at the ceremonial usually followed in the launching and christening of a ship. The phrase "baptism of bells" is merely popular and metaphorical. It has been tolerated, but has never been formally recognized by the Church. (Benedict, XIV, Instit., 47, n. 33). Every Catholic child is aware that the essence of the Sacrament of Baptism consists in the form: "I baptize thee", etc., but no properly authorized ritual for the blessing of the bells is known to have contained any phrase which can be regarded as an equivalent or parody of these words. Certain local "agenda" in which something of the sort is found, for example in Cologne appear never to have received any official recognition. On the other hand, the ceremonial of the Church is often imitative. The rite for the blessing of palms closely follows the arrangement of the variable portions of the Mass. The order for the coronation of a king copies that so nearly for the consecration of a bishop that Anglican writers recently contended the king is a "spiritual person" invested with episcopal powers. Hence it would not be surprising that in the "Benedictio Signi vel Compana certain resemblance should be traced to details in the ritual of baptism. Exorcisms are used, and water and salt and unctions with the holy oils; the bell receives a name, and formerly, at least, the name was suggested by a "godfather". But for all the controversy the resemblances are really very superficial. The following is a summary of the ceremony now in use from which the medieval pontificals differ but slightly. The bishop in white vestments first recites seven psalms with his attendant clergy to implore the Divine assistance. The he mixes salt with water, reciting prayers of exorcism analogous to those always used in the preparation of holy water, but making special reference to the bell and to the evil influences of the air - the phantoms, the storms, the lightning - which threaten the peace of devout Christians who come to the church to sing the praises of God. Then the bishop and his attendants "wash" (lavant) the bell inside and out with the water thus prepared and dry it with towels, the psalm "Laudate Dominum de coelis" and five others of similar import being sung meanwhile. These are followed by various unctions, those on the outside of the bell being made with the oil of the sick in seven places, and those on the inside with chrism in four places. In the accompanying prayers mention is made of the silver trumpets of the Old Law and of the fall of the walls of Jericho, while protection is asked once more against the powers of the air, and the faithful are encouraged to take refuge under the sign of the Holy Cross.

The belief that Bells helped in times of storms and evil was wide spread in the times of the Middle Ages.

This idea was rapidly developed, and it is supported in various treatises, spread widely in sermons, and popularized in multitudes of inscriptions cast upon the bells themselves. This branch of theological literature may still be studied in multitudes of church towers throughout Europe. A bell at Basel bears the inscription, ``Ad fugandos demones.'' Another, in Lugano, declares “The sound of this bell vanquishes tempests, repels demons, and summons men.” Another, at the Cathedral of Erfurt, declares that it can “ward off lightning and malignant demons.” A peal in the Jesuit church at the university town of Pont-a-Mousson bore the words, “They praise God, put to flight the clouds, affright the demons, and call the people.” This is dated 1634. Another bell in that part of France declares, “It is I who dissipate the thunders”(Ego sum qui dissipo tonitrua).

Here is the 1925 edition of the Rituale Romanuum for the Blessings of a Church Bell.

Amazing as it seems more than one church bell tower also serves as lighthouse! 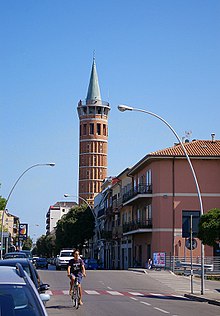 7
How did Thomas Aquinas view grace as opposed to the church fathers?
6
Did the LDS believe that Christians are doomed to hell?
2
Where did Aquinas say that the "greatest penalty of sin is the loss of the sense of sin"?
7
Did any Church Fathers believe that angels could still choose to become demons?
9
On what basis does Thomas Aquinas say that the Church existed since the time of Abel?