When the Sabbath came, he began to teach in the synagogue, and many who heard him were amazed.

“Where did this man get these things?” they asked. “What’s this wisdom that has been given him? What are these remarkable miracles he is performing? Isn’t this the carpenter?

In Matthew 13:55 which relates the same or similar scene, the public is speaking of Jesus as the son of the carpenter. Mark's version suggests that Jesus was actually engaged in the profession of a carpenter like his foster-father had been. But we do not hear of such a prospects either from the mouth of Jesus or from the narratives of the Evangelists.

My question therefore is: According to Catholic scholars, did Jesus engage himself in any profession before the commencement of his Ministry?

Traditionally, Jesus followed in his foster-father of Our Lord (Nutritor Domini), St. Joseph in the family trade!

If the people of Nazareth were astonished at Jesus’ teaching and ministry, then he was equally astonished at their unbelief. How could the very same people who clearly recognized Jesus’ divine anointing reject it simultaneously? This inconsistency shows that sometimes our response to Jesus is not just a matter of the intellect, but rather one of the heart and the will. Some folks just don’t want to believe.

In Matthew’s gospel, the episode in which Jesus is identified with the carpenter’s trade is similar to the one in Mark’s account, though the context is different. Jesus has just explained the mystery of the kingdom of heaven in terms of several famous parables. Shortly thereafter, he returns home and teaches in the synagogue, and the response is the same. The people of his village cannot believe that someone so smart and powerful could have arisen in their midst, yet without their recognition. They know his mother Mary, his four brothers, and his sisters. Is not this the carpenter’s son? His schooling was informal; his trade was common; his family ordinary. From what possible source, then, could Jesus have received his astounding insights and abilities (Matthew 13:53-58)?

In the gospel of Mark, Jesus is explicitly designated to be “the carpenter,” whereas in Matthew’s gospel he is described more furtively as “the carpenter’s son.” This makes little, if any, difference, since it was quite customary in those days for a son to take up his father’s trade. As the son of a carpenter, Jesus would have naturally learned carpentry at his father’s knee. For all practical purposes, then, the gospels of Mark and Matthew are in agreement: Joseph and Jesus practiced the same vocation.

Jesus’ first calling as a carpenter is, therefore, biblically secure. His vocation was also acknowledged early in church history. In the second century A.D., Christian apologist Justin Martyr (c. 100-165), in his Dialogue with Trypho (chapter 88), affirmed Jesus’ wood-working along with its spiritual significance. Similarly, the fourth-century verse of Ephrem the Syrian (c. 306-73), in his Hymns on the Nativity (#6), poetically extols the physical and spiritual values of Jesus the carpenter.

Even the non-canonical, apocryphal gospels pay tribute to Jesus as a carpenter, albeit in a rather fanciful (and probably non-historical) way. The Gospel of Pseudo-Matthew, various versions of the Gospel of Thomas, and The Arabic Gospel of the Infancy of the Savior all contain a curious story about how the child Jesus miraculously evens up boards of unequal length so that his father Joseph can complete a promised project.

As the veteran village carpenter of Nazareth for approximately eighteen sweaty years, Jesus would have made things like chests, cupboards, tables, chairs, ploughs, and yokes. In making these and other items, he would have used the tools common to his craft like the axe, adze, hatchet, mallet, measuring line, stylus, plane, and compass. Insights drawn from his woodworking undoubtedly penetrated his consciousness, and necessarily showed up in his teaching ministry. For example, Jesus asked (in Luke 6:42), “How can you say to your brother, â€˜Brother, let me take that splinter out of your eye,’ when all the while you yourself do not see the beam in your own eye?” Don’t you suspect that his experiences as a carpenter were in the background? - Jesus the Tekton 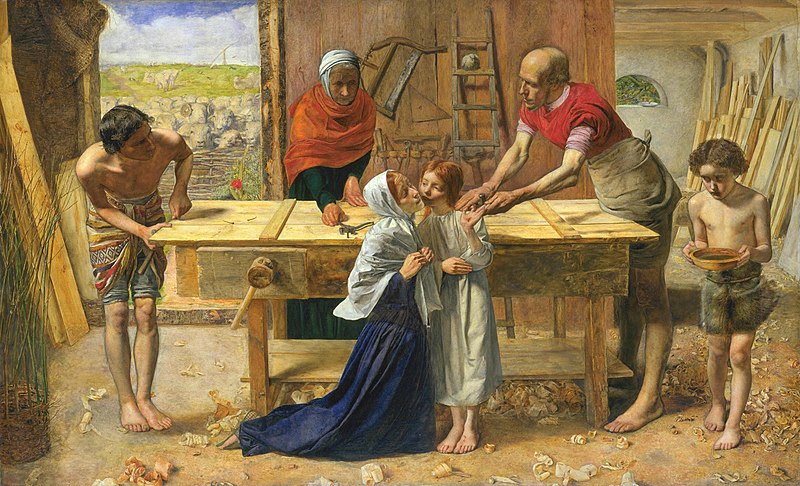 Many Christian paintings, both Catholic and in other denominations, show Jesus working in a wood working shop, after along side of St. Joseph. 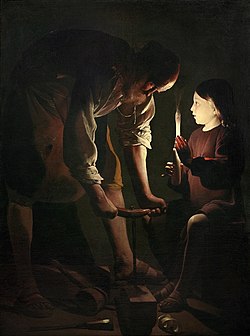 Joseph the Carpenter is an oil painting by Georges de La Tour created circa 1642. The painting depicts a young Jesus with Saint Joseph, his earthly father.

Tradition holds he was a carpenter!

3
Where did Jesus stay during his 3.5 year ministry?
4
Did Jesus perform a single miracle before his fast and temptation?
4
If Jesus' ministry was to the Jews, why did He go to Syria?
0
Do Catholics have a "profession of faith" in Jesus Christ before baptism?
0
Is there any place in the Bible that Jesus Himself claims that all believers are members of His Body?
0
Why did Jesus keep himself and the disciples hungry and thirsty on some occasions?
3
Did Jesus' disciples celebrate His birthday?