I'm trying to track down a Catholic bible translation. I saw a screenshot of it online (a picture of a physical copy) a few months ago but have yet to identify which translation it is.

The key thing that was highlighted in the meme pic was that the translators had inserted "One, Holy, Catholic, Apostolic" into Christs words in chapter 16, such that Christ ends up saying "on this rock I will build my one, holy, catholic, apostolic church."

I'm super curious to track down this translation because I find it somewhat humourous but I also think there could be some actual value in it, on a sociological level at least.

Does anyone know which translation this could be? I suspect it's one of the following but can't find online copies to confirm: 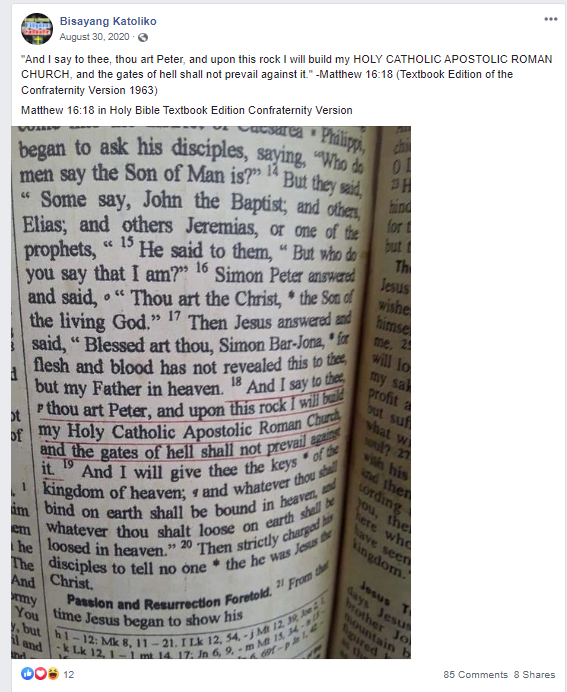 The caption says: "Holy Bible Textbook Edition Confraternity Version" which maybe the one that is sold here at Amazon, published by the Catholic Book Publishing Company in 1963. A scanned version can be viewed at archive.org, with that verse in this page.

But the picture is most likely doctored !

BUT, if we trust the integrity of the digital version in archive.org more (which was based on a 2011 physical scan of a donated copy from Toronto Book Drive), you will see that the image in the Facebook post was doctored !! Below is my screen snapshot of the archive.org viewer of the full 2 side by side pages that contains Matt 16:18. 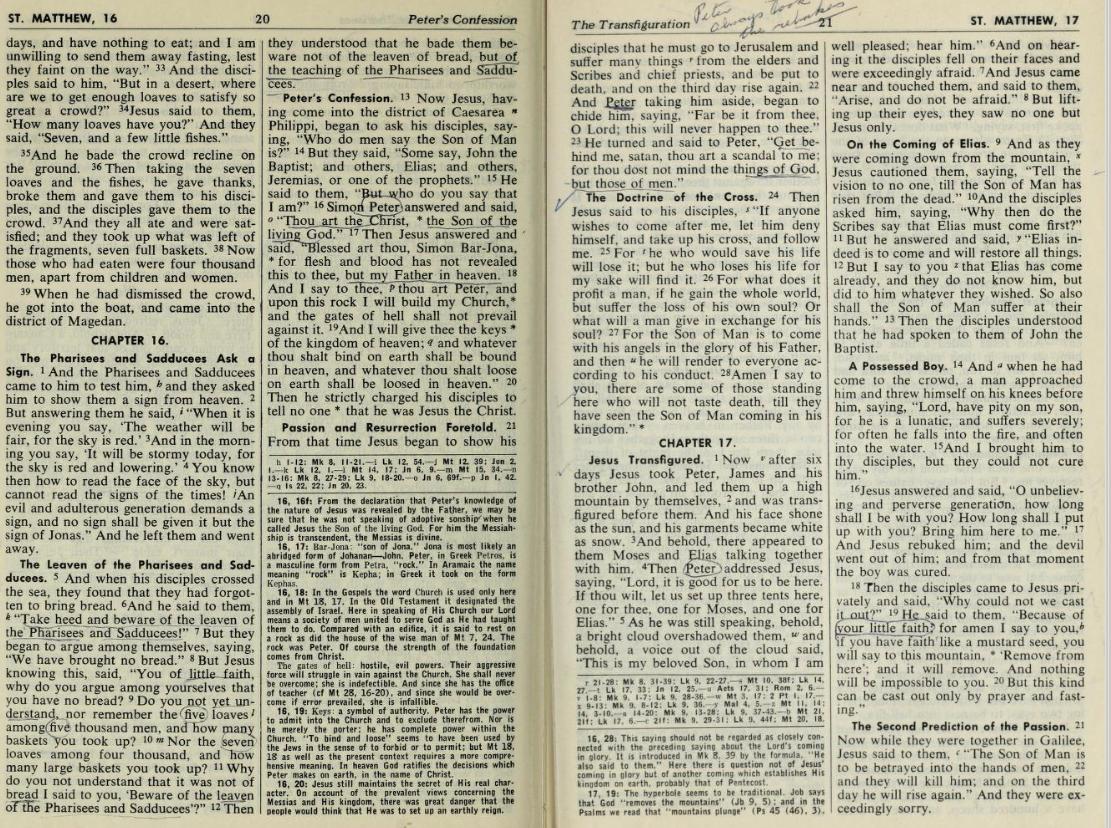 I give the one who photoshopped the picture thumbs up though, as it was done very well, paying attention to minute level of details:

Or, more likely, the photoshop was done from a flat 2D scan as the source. It is then printed out on paper, red lines and minor blotches added. He/she then inserted the two doctored pages in the middle of a thick book, and took the picture while holding the spine of the book as though the 2 pages are part of that book.

About the Confraternity version

If you're interested in the Confraternity Version, there is a Wikipedia entry which gives the interesting background, purpose, and the history of the translation project. I also found a page scan of a magazine article about it, 'Intelligible, Modern English' Aim Of New Confraternity Bible Version, by Stephen Hartdegen, O.F.M. from The Catholic Transcript magazine issue of July 15, 1965 (page 10).

Not the answer you're looking for? Browse other questions tagged catholicism bible bible-translation catholic-bible identify-this .