According to Catholic Tradition, did Tobias and Sarah consummate their marriage on their wedding night or just pray together?

I was listening to a recent podcast on Relevant Radio where the host said there's a tradition in the Catholic Church of not "engaging in the conjugal act" on couples wedding night and that this had something to do with the Book of Tobit. In Tobit, Tobit's son Tobias and his new wife Sarah prayed and burned fish guts to expel a demon who killed all of Sarah's other husbands on their wedding night.

I'd ask 3 different questions, but I think the answers might short circuit each other.

catholicism book-of-tobit
Share
Improve this question
asked May 13 at 15:21

According to Catholic Tradition, did Tobias and Sarah consummate their marriage on their wedding night or just pray together?

8 When they had finished the meal, and it was time to go to bed, Sarah's parents led young Tobias to the bedroom. 2 He remembered Raphael's instructions, so he took the fish's liver and heart out of the bag where he had been keeping them. Then he placed them on the burning incense. 3 The smell drove the demon away from them, and he fled to Egypt.[b] Raphael chased after him and caught him there. At once he bound him hand and foot.

The Prayer of Tobias

4 When Tobias and Sarah were alone behind closed doors, Tobias got up from the bed and said to his wife:

Get up, dear. Let's pray for the Lord to be merciful and to protect us. 5 Sarah got up so that they could pray together and ask God for his protection. Then Tobias prayed:

God of our ancestors, you are worthy of praise. May your name be honored forever and ever by all your creatures in heaven and on earth.

6 You created Adam and gave him his wife Eve to be his helper and support. They became the parents of the whole human race.

You said: It is not good for man to live alone. I will make a suitable helper for him. 7 Lord, I have chosen Sarah because it is right, not because I lusted for her. Please be merciful to us and grant that we may grow old together.

8 Then they both said: Amen 9 and went to bed for the night. 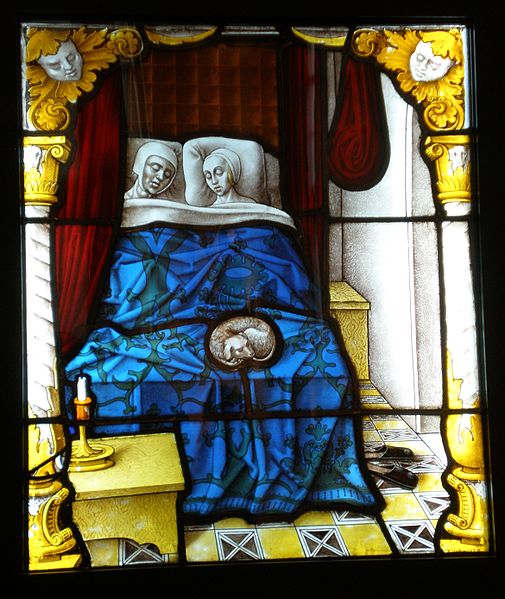 The Book of Tobias recounts the story of the pious aged Tobit and how his son, Tobias, with the aid of the archangel Raphael, was able to restore his father's health and wealth. The archangel Raphael, in disguise, leads Tobias to the lands of his kinsman Raguel. Raguel gives his daughter Sara in marriage to Tobias but warns him that Sara's seven previous husbands had all been devoured by demons on the wedding night.

With Raphael's aid, Tobias prepares a potion, the smell of which drives the demons out. He and Sara are able then to successfully consummate their marriage.

The dog sleeping on their bed belonged to Tobias and accompanied him and Raphael on their journey. In this context he may also symbolise marital love and fidelity.

Relevant Radio may have stated that there is a tradition in the Catholic Church of not "engaging in the conjugal act" on couples wedding night and that this had something to do with the Book of Tobit. However, I really doubt that to be the case. If it is a Catholic tradition, it is not a very well known tradition and may possibly limited to a specific region. I have never heard of it!

You need also to understand that the reason Tobias survives the demon’s assault is that he exorcises him using, I am not making this up, the burnt liver and heart of a man-eating fish he had wrestled to death earlier in the narrative. The angel Raphael captures the demon and ties him up in Egypt! Yes! This is the best Bible story ever for sheer entertainment value!

But, here is the reason many Catholics include readings from Tobit in their wedding Mass:

When the door was shut and the two were alone, Tobias got up from the bed and said, “Sister, get up, and let us pray that the Lord may have mercy upon us.” And Tobias began to pray,

“Blessed art thou, O God of our fathers, and blessed be thy holy and glorious name for ever. Let the heavens and all thy creatures bless thee. Thou madest Adam and gavest him Eve his wife as a helper and support. From them the race of mankind has sprung. Thou didst say, ‘It is not good that the man should be alone; let us make a helper for him like himself.’

And now, O Lord, I am not taking this sister of mine because of lust, but with sincerity. Grant that I may find mercy and may grow old together with her.” And she said with him, “Amen.” Then they both went to sleep for the night. (Tobit 8:4-9)

So, the Book of Tobit offers some powerful insights into the components of a godly, fruitful marriage. Tobias practices such circumspection and restraint in his wedding night with Sarah. First, he heeds the wisdom and advice of his friend to create a space of safety and welcome with his bride. Yes, most wedding nights do not involve an exorcism of such extreme qualities, but each couple needs to approach their marriage with the air cleared between them of all the past things that might separate them. - Talking Marriage & Sex with Tobias and Sarah

Not the answer you're looking for? Browse other questions tagged catholicism book-of-tobit .