Was a Unitarian understanding of God present in the Early Church prior to 400 AD?

As we know, the Trinity is a doctrine that is not explicitly contained in the Bible. Of course Trinitarians would say it is present, but nevertheless it does require a lens of interpretation, so that Unitarians could read the same Bible and come out saying God is Unity without Trinity.

But the formalised Biblical canon we recognise now originates in the late 4th Century, with the Council of Rome and St. Jerome. Prior to that, is there post-NT evidence that Unitarianism was part of the Christian Faith?

trinity early-church unitarianism
Share
Improve this question
edited May 2 at 5:49

The Ebionites are perhaps the earliest, clear example, emphasizing Jesus' humanity, and are an example of 'adoptionism'.

These sorts of views later developed as Monarchianism, and writers in this tradition include Theodotus of Byzantium and Paul of Samosata. Some Montanists were also Monarchians, but not all.

Arianism (named after the Bishop Arius) is perhaps the most well-known example that is often considered Unitarian. However, Arianism is just one example of what is known as 'subordinationism'. Sometimes subordinationist views are considered as Unitarian, in other cases as proto-Trinitarian.

In summary, you have at least the Ebionites and other adoptionists, the Monarchians (including some Montanists), and the Arians (and more broadly, various subordinationists).

Contemporary Biblical Unitarianism, similar to Socinianism (16th century), would fit into what is called dynamic Monarchianism, a view that is found pre-400.

This image from a talk by Dale Tuggy illustrates the main pre-Trinitarian Christological options from 150-380. 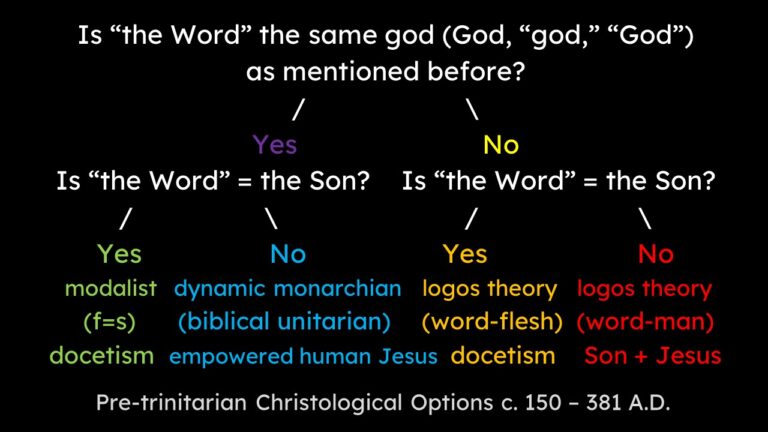 Not the answer you're looking for? Browse other questions tagged trinity early-church unitarianism .

24
Was tithing 10% required or encouraged by the early church?
5
Would Nicene Christians consider a Unitarian Baptism sufficient for entry into the Church?
9
What was Martin Luther's perspective on the early Christian church?
19
How prominent was "prosperity theology" in the early church?
11
Was universalism the majority belief of the early church?
2
Was James the early church leader?
2
What was the early Church Fathers' understanding of the "baptism with Holy Spirit and fire"?
4
Are there published testimonies from Christians who independently discovered the doctrine of the Trinity on their own by just reading the Bible?
1
Are there published testimonies from Christians who had the truth of the Trinity revealed to them through the Holy Spirit?
3
From a non-Trinitarian perspective, how would you show that the Bible does not teach that the Son is equal with the Father?