According to Christians who believe that we cannot pray to Jesus, are we allowed to communicate to Jesus via song?

I know there are some Christians who believe that praying to Jesus is not allowed, and only praying to God(the Father) is allowed, such as certain Biblical Unitarian groups who teach that Jesus was only a man or that Jesus is a lesser god(i.e. Jehovah's Witnesses). I'm curious as to what they think of Revelation 5:8-10, where each of the 24 elders sang a song of praise directed to the Lamb(Jesus), talking to Him(emphasis mine).

Revelation 5:8-10 When he took it, the four living creatures and the twenty-four elders fell down before the Lamb. Each of the elders held a harp and gold bowls filled with incense, which are the prayers of the holy ones. 9 They sang a new hymn: “Worthy are YOU to receive the scroll and to break open its seals, for YOU were slain and with YOUR blood YOU purchased for God those from every tribe and tongue, people and nation. 10 YOU made them a kingdom and priests for our God, and they will reign on earth.” (NAB)

It's clear that the elders directly communicated to the Lamb via their song of praise. So my questions are;

According to Christians who believe that we cannot pray to Jesus, are we allowed to communicate to Jesus via song?

Reason would seem to dictate that the answer would be no!

However many Christians sing and/or chant prayers, that are direct petitions to Jesus. These are not just simply songs of the praises of Jesus in honour of his miraculous works he preformed while on earth, they are actual prayer petitions.

Even In the 4th century, St. Augustine was inspired to state that “Singing is praying twice.” It’s an adaptation of a quotation usually attributed to St. Augustine, “One who sings prays twice.”

Historically speaking, Christians often petitioned Jesus in prayer through song in one form or another.

Here is just one example of an historical traditional use of public Catholic prayer which is often chanted as a devotional prayer: Litaniae Sanctissimi Nominis Iesu (Litany of the Most Holy Name of Jesus).

The complete litany, along with it’s English translation may be found here: Litaniae Sanctissimi Nominis Iesu. I deliberately quoted the the Latin text to help explain that the notion of prayer that is sung or chanted is traditional way of prayer that is several centuries old.

The Orthodox and Catholic Churches both chant the Kyrie eleison.

Kyrie, a transliteration of Greek Κύριε, vocative case of Κύριος (Kyrios), is a common name of an important prayer of Christian liturgy, also called the Kyrie eleison.

In the New Testament, the Greek phrase occurs three times in Matthew:

In the Parable of the Publican and the Pharisee (Luke 18:9-14) the despised tax collector who cries out "Lord have mercy on me, a sinner" is contrasted with the smug Pharisee who believes he has no need for forgiveness. 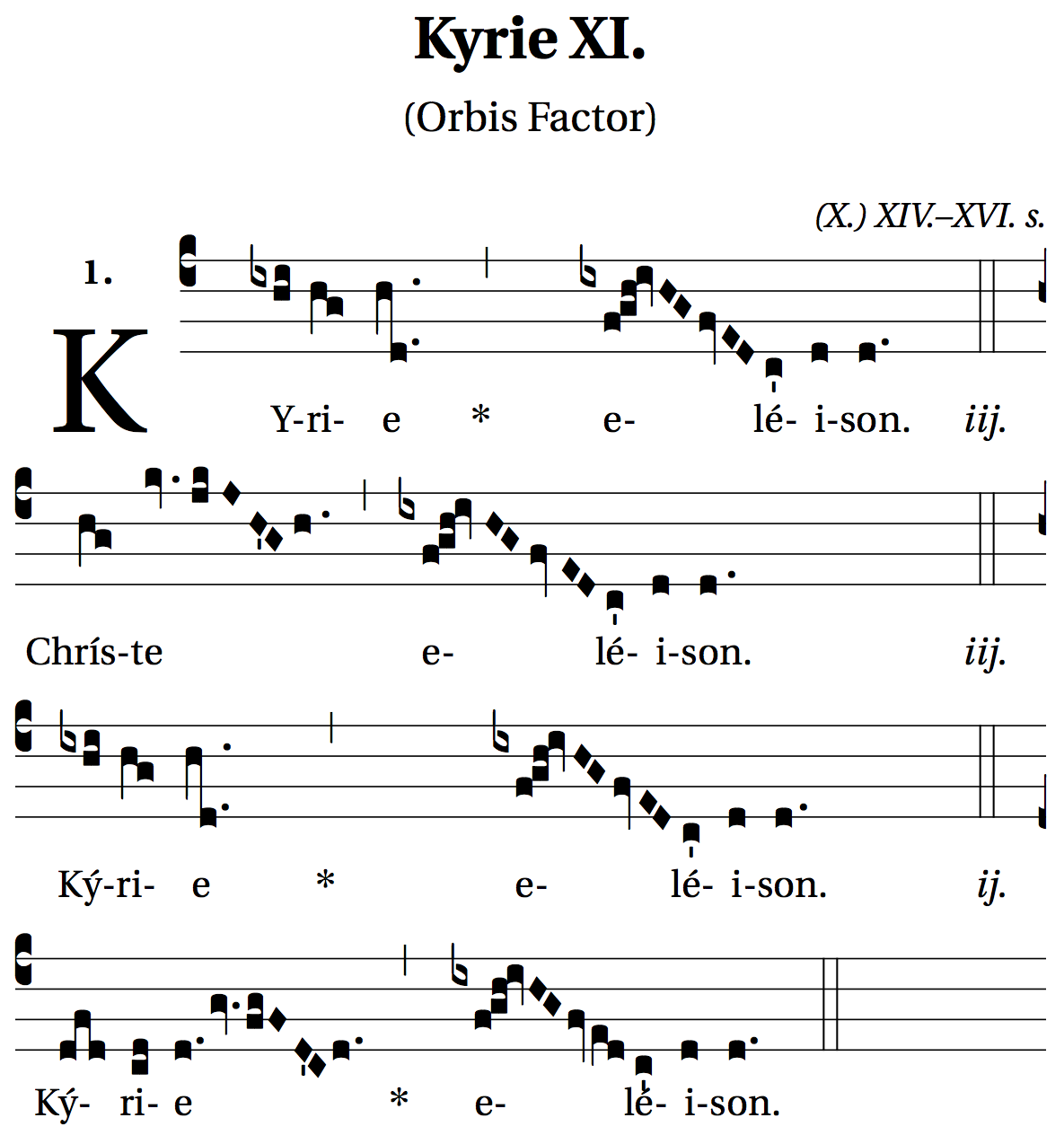 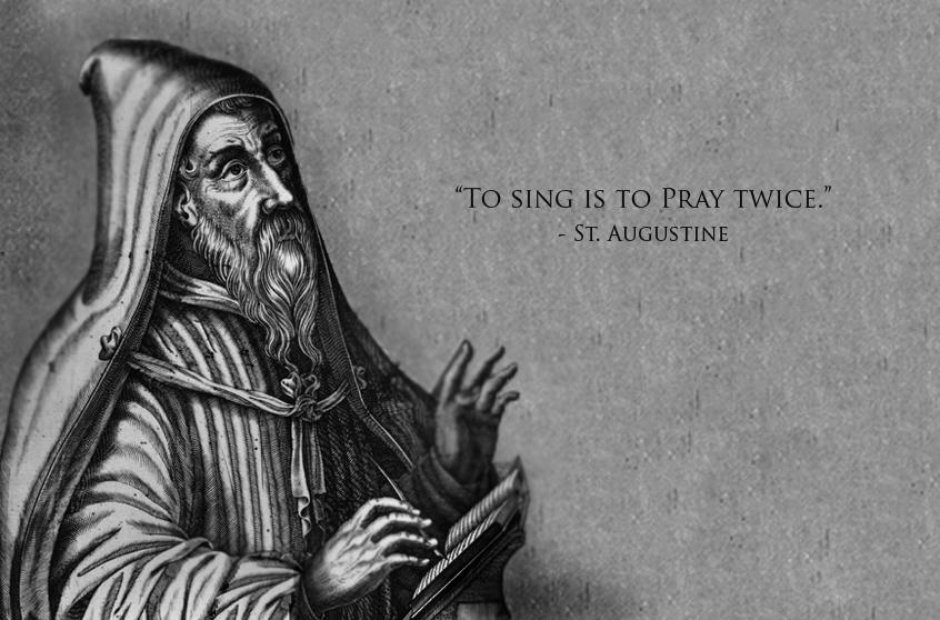 Are Christians allowed to communicate to Jesus in the form of song, just as did the 24 elders? Absolutely.

According to the Ethiopian Orthodox Tewaido Church the twenty-four elder are Holy Angels (Seraphim).

The twenty-four Priests of heaven are a class of priestly angels positioned in the fifth rank of angelic hierarchy and perform priestly duties without rest. (Rev. 4:4, 10, 11)

The Ethiopian Orthodox Tewaido Church has been built churches dedicated to them and celebrates their feast each year on Hidar 24 (December 3).

They are saints with God and they make intercession on behalf of the race of men, and they bring unto Him the prayers of the saints like incense in the censers in their hands. Alms and oblations cannot ascend to God except through them even as Saint John the evangelist says in the Vision of the Apocalypse, “I saw the place of Twenty Four elders round about Him, and they were sitting on twenty four thrones; and on their heads were twenty four crowns, and in their hands were twenty four censers containing sweet-smelling incense, which is the prayers of the saints who dwell upon earth, and which they make to rise up before God, the Sustainer of the Universe.”

And he also says, “And I heard Four Beasts praising and saying, Holy, Holy, Holy, Lord [God] of Hosts, the heavens and the earth are filled full of the holiness of Thy glory”. And straightway the twenty four priests of heaven fell down with their faces to the ground, and they took off their crowns, and they said unto Him, Glory, and honor, and thanks are fitting for Thee. And when a command went forth from God they fell down again with their faces to the ground, saying, Glory, and power, and judgment, and righteousness belong to our God” (Rev. 4:4).

And because the father of the Church have found statements about these Twenty Four Priests of heaven in the Holy Scriptures, and have seen stories told of them by the Apostles and in their Canon, saying that they are nigh unto God, they have ordered and ruled, saying, “The name of him that celebrates their commemoration shall be revealed upon earth. And they shall entreat God on his behalf to forgive him all his sins.” Therefore, Church fathers tell the people to honor the festival of the commemoration of the Twenty Four Priests of heaven.

Salutation to you, O priests of the Law. Their intercession be with us and Glory be to our God forever. Amen

According to Christians who believe that we cannot pray to Jesus, are we allowed to communicate to Jesus via song? When you pray to God through Jesus, you are actually praying to Jesus because in Isaiah 9:6 it states that Jesus will be called Eternal Father!

6 Jesus answered, “I am the way and the truth and the life. No one comes to the Father except through me. 7 If you really know me, you will know[b] my Father as well. From now on, you do know him and have seen him.”

8 Philip said, “Lord, show us the Father and that will be enough for us.”

9 Jesus answered: “Don’t you know me, Philip, even after I have been among you such a long time? Anyone who has seen me has seen the Father. How can you say, ‘Show us the Father’? 10 Don’t you believe that I am in the Father, and that the Father is in me? The words I say to you I do not speak on my own authority. Rather, it is the Father, living in me, who is doing his work. 11 Believe me when I say that I am in the Father and the Father is in me; or at least believe on the evidence of the works themselves. 12 Very truly I tell you, whoever believes in me will do the works I have been doing, and they will do even greater things than these, because I am going to the Father. 13 And I will do whatever you ask in my name, so that the Father may be glorified in the Son. 14 You may ask me for anything in my name, and I will do it.

So, Jesus being our one mediator between man and God as stated in 1 Timothy 2:5,is none other than our Father who is God The Holy Spirit as in Isaiah 9:6. Which means it is Biblically impossible not to pray to Jesus!

As for using song as a form of communication with Jesus, one of my all time favourite Roman Catholic hymns is Sweet Heart of Jesus, and to me this is a delightful and very touching prayer to Jesus.

Here are the lyrics:

To me personally, this is a wondeful prayer to Jesus that is sung.

Jesus is your Father, Saviour, Comforting Spirit, and Lover of your soul. He is your Lord and King, and you are expected to be in a personal relationship with Him, and you are to be seen going about the work He has given you to do as a good child in His house.

I don't maintain that Jesus is God, and thus would say that it is inaccurate to pray to Jesus as-if God Almighty. I would also point out that Jesus himself taught us to pray to the Father (Matthew 6:7-14).

However, Jesus is the mediator between God and men - and in the sense that he is God's perfect representative he maybe called God (as so many angels and even Moses have been addressed). Furthermore, it is not our words that are important in prayer - for the HS takes what is in our hearts and communicates to God for us.

Romans 8:26-27 In the same way, the Spirit helps us in our weakness. We do not know what we ought to pray for, but the Spirit himself intercedes for us through wordless groans. 27 And he who searches our hearts knows the mind of the Spirit, because the Spirit intercedes for God’s people in accordance with the will of God.

To address some of your other questions:

Praise is not prayer. I would classify it as worship and (contrary to what many people will tell you) there is no prohibition against worshipping a man. Moses worshipped his father-in-law (Exodus 18:7). To worship = to bow down/prostrate yourself = to honor someone.

Translators like to play games - and here is a common one. Whenever the Hebrew word (Shachah) appears and is applied to God it is translated as "worship." When it is applied to a man, however, they instead translate it as "obeisance" or the like. This creates a false narrative that only God is to be worshipped.

Not the answer you're looking for? Browse other questions tagged life-of-jesus prayer revelation .

5
The four living creatures and twenty-four elders in Revelation?

15
From an idealist perspective, what are the "seven spirits of God"?
12
According to Jehovah's Witnesses, who are the 144,000 mentioned in the book of Revelation?
5
The four living creatures and twenty-four elders in Revelation?
4
Are there designated circumstances for making prayer to Jesus and making prayer to God?
4
Does God have a form as seen by John the Apostle?
1
What is the biblical basis for those in heaven being able to pray for the living?
4
Are there any commentaries from Trinitarians that explain why the Holy Spirit doesn't have a throne/receive worship in Revelation?
1
Do Biblical Unitarians believe that Christians can pray to Jesus and, if so, that he can answer a prayer in which he is asked about his divinity?
2
When was it claimed for the first time that Christians could "pray in tongues" in private for self-edification?