I would like to gather information on local unique feasts that exist or have at one time existed within the Catholic Church either at a parish, diocesan or national level.

For example the Catholic Church in Malta celebrates the Feast of the Shipwreck of St. Paul each year on February 10th.

This coming Wednesday 10th February, Malta will be celebrating the feast of St. Paul’s Shipwreck. Although usually celebrated with particular fervour in Valletta, it is a public holiday across the whole country, for this feast has for centuries held a special significance for the Maltese people.

According to the Acts of the Apostles, in the year 60 AD, St. Paul was on a ship headed to Rome, where he was to face trial. At one point during the voyage, the ship was caught in a violent storm, which eventually led to the vessel foundering off the Maltese coast. St. Paul and everyone else aboard made it to shore safely, where they were welcomed and looked after by the locals. St. Paul remained here for three months, during which time it was claimed that he performed a number of miracles, but most importantly, he was also credited with introducing Christianity to Malta, and to have converted the local people.

This, at least, is what tradition claims. Some academics are more sceptical; for starters, the earliest archaeological evidence of Christianity in Malta has been dated to the 4th century AD, several hundred years after the shipwreck. One also has to bear in mind that following the Arab conquest in 870 AD, Islam would have become the dominant faith here for quite some time, before Malta was eventually re-Christianised. It was then, perhaps, in an attempt to emphasise Malta’s Christian roots while encouraging a breaking off from Islam, that some stories associated with St. Paul’s visit started to gain popularity. His cult grew and was strengthened even more with the arrival of the Knights of St. John, who found the perfect opportunity to win over the locals by championing their patron saint, not to mention that being in possession of a number of Pauline sanctuaries would also have increased their own prestige. Thus, with time, many Pauline legends sprung up. - 7 Legends linked to St. Paul’s Shipwreck

For the sake of clarity I am interested in both liturgical and/or piously recognized local traditions of non-liturgical feasts by the local Ordinary of the diocese in question.

If possible please include the date of celebrating the Feast and any pertinent information or sources attached to it.

The Arrival of St. John Marie Vianney at is celebrated at Ars itself on the Second Sunday of February.

We do not know the exact date when St. John Vianney arrived at the Village of Ars, save that it was in February 1818! 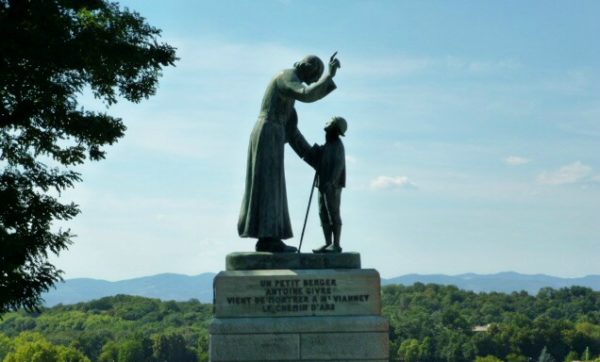 In 2018, the celebrations were presided by the Cardinal Beniamino Stella, Prefect of the Congregation of the Clergy. After all St. John Vianney is the Patron Saint of Parish Priests.

Although celebrated at Ars annually, the year 2018 was equally the 200th anniversary of the arrival of St. John Marie Vianney at Ars.

Ars is a tiny village—one can see that even to these days. However, it is famous for the parish priest it once had: St. John Mary Vianney, patron of priests (especially parish priests), whose memorial we just celebrated (Aug. 4).

Visiting priests who are priests for less than one year may request the privilege of saying their mass with the chalice of St. John Vianney. (Source)

Most people know that March 17 is the Feast of St Patrick. But in Japan, the faithful celebrate the Feast of the Discovery of the Hidden Christians or Kakure Krishistans.

In 1614, all Catholic missionaries were expelled from Japanese soil. Fr. B. Petitjean arrived in Nagasaki, Japan in August 1864 and was able to construct a small Church. On March 17, 1865 he discovered that the Christian faith had survived in Japan for some 250 years without any missionaries (priests) to administer the sacraments!

Though Sara is not canonically recognized by the Church, many in the Catholic Gypsy or Gens du Voyage (Gitan, Rom, Manouche, Tsigane) community believe that Sara is integral to the story of the Saintes Maries. Gypsies come here to pray and to celebrate the Marys and Sara, and the feast is an occasion for family reunions, baptisms and weddings. They regard Sara as their patroness, treat her with tremendous devotion, and come here to manifest that. For them, this feast is a religious highlight of the year.

The women and the tradition behind the feast

Marie Salomé and Marie Jacobé, typically referred to in English scriptural translations as Salome and Mary, the mother of James, are referenced a number of times in the gospel. With Mary Magdalene, they were Jesus’ disciples and caregivers in Galilee (Mark 15:41). They and Mary Magdalene were the only disciples named as having been at the Cross when Jesus died (Mark 15:40). They were the women who discovered the empty tomb when they went to anoint Jesus’ body, and were the first to whom the resurrection was revealed (Mark 16:1-8). According to Luke, they were among those who told the doubtful Apostles about the resurrection (Luke 24:1-12)

Camarguaise and Provençal traditions have it that Marie Salomé and Marie Jacobé, with Jesus’ friends Mary Magdalene, Martha and Lazarus, were forced to flee Judea by boat with two of Jesus’ other disciples, Maximin and Sidoine. Marie Salomé and Marie Jacobé, already old, stayed in the Camargue, living at the spot where the church is now located, and were buried there. The others moved on and brought Christianity to the rest of Provence, and hence to the whole of France: Martha continued to Tarascon, while Maximin, Mary Magdalene and Lazarus went to the areas around Marseille and Aix-en-Provence.

Sara’s story is even more obscure. Depending on who tells the story, she either came with the two Marys as their servant, or as their equal, or even preceded them and greeted them when they arrived. By one telling, she was one of Pilate’s wives, an Egyptian who on witnessing the events of Jesus’ Passion, converted to Christianity, traveled on the boat with the two Marys, and evangelized the Gypsy people. In another telling, she was the chief of a dark skinned people who originally inhabited in the Camargue, greeted the Marys when they landed, and asked to be baptised.

The first written reference to the presence of the Saintes Maries in France dates to the early 13th century and was ascribed at the time to an ancient and authoritative local oral tradition. The medieval, fortress-like church in the center of town was built up around a well, still accessible in the center of the church, that was said at the time to be the Saintes Maries’ well. In 1315, the bishop of Arles approved a confraternity dedicated to Ste. Marie Jacobé and Ste. Marie Salomé, and their current feast days, May 25 and October 22, were celebrated there by 1357.

In 1948, Msgr. Roncalli, the future Pope John XXIII, presided at the Saintes Maries procession to celebrate the 500th anniversary of the discovery of the relics. In 1958 the chaplaincy introduced an image of Mary known as Notre Dame des Roulottes, Our Lady of the Caravans, but apparently the Gypsies recognized it as an attempt to make Sara’s role secondary, and began to crown her with a tiara to counter any diminution.

Saint Sarah, also known as Sara la Kali ("Sara the Black"), is the patron saint of the Romani people. The center of her veneration is Saintes-Maries-de-la-Mer, a place of pilgrimage for Roma in the Camargue, in Southern France. Legend identifies her as the servant of one of the Three Marys, with whom she is supposed to have arrived in the Camargue.

According to various legends, during a persecution of early Christians, commonly placed in the year 42, Lazarus, his sisters Mary and Martha, Mary Salome (the mother of the Apostles John and James), Mary Jacobe and Maximin were sent out to sea in a boat. They arrived safely on the southern shore of Gaul at the place later called Saintes-Maries-de-la-Mer. Sarah, a native of Berenice Troglodytica, appears as the black Indo-Egyptian maid of one of the Three Marys, usually Mary Jacobe.2 (The natives of Berenice Troglodytica had ancestors who once came from the Malabar Coast, through Indo-Roman trade relations, and settled in Egypt (Roman province) and intermarried with Egyptians.)

Though the tradition of the Three Marys arriving in France stems from the High Middle Ages, appearing for instance in the 13th century Golden Legend, Saint Sarah makes her first appearance in Vincent Philippon's book The Legend of the Saintes-Maries (1521), where she is portrayed as "a charitable woman that helped people by collecting alms, which led to the popular belief that she was a Gypsy." Subsequently, Sarah was adopted by Romani as their saint.

Some authors, taking up themes from the pseudohistorical book Holy Blood, Holy Grail, suggest that Sarah was the daughter of Jesus Christ and Mary Magdalene. These ideas were popularized by Dan Brown's The Da Vinci Code,

4
Has there ever existed a Catholic local church feast at Rome in honor of the Domine Quo Vadis?
7
Has the Catholic Church ever attempted a local substitute for the word Amen?
3
Which feasts did Christ fulfill?
5
Why is there not a Liturgical Feast in honour of the Father within the Catholic Church?
1
Unique Catholic Blessings of local Churches?