When was the New Testament written, and by who?

I guess strongly that there had been so difficulty in writing the Bible at that time, because there must have been difficulty of translation and dialect. I heard that the Mark was written first, and the Matthew and the Luke was written as followed the Mark. Is it correct?

Scholars argue various possible dates for the books of the New Testament, but the vast majority place the current NT cannon as written in the first century, with John possibly writing Revelation as late as CE 95.

I guess strongly that there had been so difficulty in writing the Bible at that time, because there must have been difficulty of translation and dialect

That was likely not a problem. Greek was the international language of commerce throughout that area of the world, a leftover from the Grecian Empire, and many people in that area were multilingual. Matthew, being a tax collector, must have been able to write Greek and I think he likely wrote his gospel without much of a problem. Luke, the Gentile, would certainly know Greek. Some, like Paul and Peter, used scribes for some of their epistles, although Paul was a very educated man and in Galatians 6:11 notes he is writing that letter himself. Galatians is one of the earlier epistles, and Paul could write Greek.

I assume you may want a source; so, here is a quote from Dr. Orville Jenkins:

"By the time of Christ, Greek had been the administrative and cultural language for over 3 centuries, along with the local and ethnic languages. The Aramaic-speaking areas would have spoken Greek also as a working language, and a primary language in many cases."

On another part of your inquiry, Mark written first is the most prevalent view in the synoptic problem, which is purely hypothetical. So, in answer to "is this correct?" maybe.

Mark is viewed as one source for Matthew and Luke because it is very much abbreviated and only 10% of Mark is unique to Mark, with a lot of this original material found in the last chapter of Mark.

There is also a source called Q (verses unique to and shared by Matthew and Luke but not found in Mark). Then there is the M source (only in found Matthew). And the L source (found only in Luke). Its all hypothetical to cover the bases, not based on actual knowledge of sources. If you really want to explore this do a search for synoptic problem and there will be tons of information to explore.

There is also the Matthew first view.

When was the New Testament written, and by who?

The NT is the collection of Christian scripture that was held by early Christians since the end of the 1st century, mainly the 4 Gospels and the messages. They are a Koine Greek literature work about Jesus of Nazareth.

These books were not 1-pack, the first time in history when the 4 Gospels were put together was a compilation called the Diatessaron, which was compiled between 160-170 CE.

Before that, the early Christians had "Gospels" and sayings [i.e. oral tradition] about Jesus that started to flow among people as per the testimony of the author of Luke:

Luke 1:2 Even as they delivered them unto us, which from the beginning were eyewitnesses, and ministers of the word;

The biblical stand on the authorship of the Gospels is in conflict with the church tradition, the consensus among scholars is the authors are anonymous, because:

So the scholars [instead] began theorizing on these writings by comparing the Gospels verses together, and also comparing the messages attributed to a specific author to find differences in the way of writing and common belief points, this is called textual criticism.

The dominant theory on the Gospels sources is the Q document: 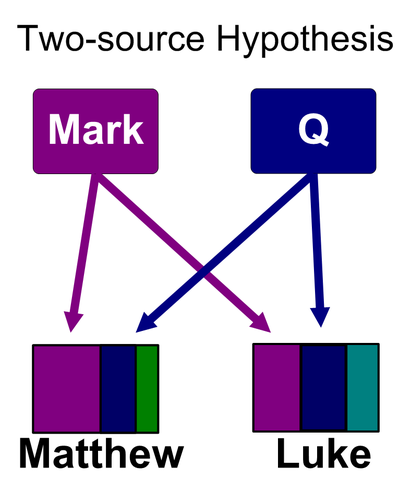 Scholars assume from the similarities between the verses of Matthew and Luke; that their authors must have been reading from a source, and found that Mark being the shortest; makes it the oldest Gospel.

It's probable that Matthew and Luke authors were reading from the Gospel of Mark to write identical verses, but the common verses [between both] that was not found in Mark were assumed to have came from an unknown written source, and they called it Q.

The 4th Gospel was taken out of this equation because the author of John doesn't seem to share the same theological belief about Jesus like the authors of the Synoptic Gospels [i.e. the first 3], so it must be the last Gospel to be written, and at a later time from them.

Of course, others theories exist on the writing of the Gospels we have today, but the Q document theory is the most accepted one.

Being Muslim myself, I personally have no objection to most of what's written in the Gospels [and maybe the New Testament] even when these books may be under the shadow of faith than historical accuracy. For preservational purposes; they tell us what the early Christians said about Jesus, the man who quarreled with the Roman authorities 2000 years ago. They don't need to be 100% accurate, but at least we can grasp what Jesus taught, and most importantly, the God of Abraham.

If you believe the bible's account of itself regarding the New Testament, it was written between the bookends of the first and last apostles to die; that was, James and John sons of Zebedee, sons of thunder.

Augustine hinted at this understanding.

Or as the Bible says this.

New Testament written in the first century by eyewitnesses or their companions.

7
When was the Gospel of Mark written?
1
Who assigned the gospel authors originally?