Modern archaeological searches for the Tomb of Mary, the Mother of Jesus at Ephesus?

Modern archaeological searches for the Tomb of Mary, the Mother of Jesus at Ephesus?

On October 18, 1881, relying on the descriptions in the book by Brentano based on his conversations with Emmerich, a French priest, the Abbé Julien Gouyet discovered a small stone building (House of the Virgin Mary) on a mountain overlooking the Aegean Sea and the ruins of ancient Ephesus in Turkey. He believed it was the house described by Emmerich and where the Virgin Mary had lived the final years of her life.

These ruins were mentioned in the Revelations of Catherine Emmerich. Fr. Julien Gouyet, discovered the house of Mary by using her revelations to trace the location of where St. John and the Virgin Mary lived for seven years.

Blessed Catherine Emmerich believed the tomb of the Virgin Mary would one day be discovered.

My question is thus: Has any modern archaeological searches been undertaken to locate the supposed Tomb of Mary?

The House of the Virgin Mary is located on the top of Mount Koressos near Ephesus in Turkey. A long winding beautiful drive up the mountains brings you to the site.

Thus prepared, the holy body was laid in a coffin of snow-white wood with a tightly fitting, arched cover, which was fastened down at the head, the foot, and in the middle, with gray straps. The coffin was then laid on a litter. Every thing was done with the utmost solemnity, and all were penetrated with deep emotion. The sorrow of the mourners was more human and more openly expressed than at Jesus' burial, at which holy awe and reverence predominated.

When it was time to bear the coffin to the grotto, one half-hour distant, Peter and John raised it from the litter and carried it in their hands to the door of the house, outside of which it was again laid on the litter which Peter and John then raised upon their shoulders. Six of the Apostles thus carried it in turn. The coffin hung between the bearers as in a cradle, for the poles of the litter were run through leathern straps, or matting. Some of the Apostles walked before the coffin praying, and after it came the women. Lamps, or lanterns on poles, were carried.

Before reaching the grotto, the litter was set down. Four of the Apostles bore the coffin in, and placed it in the hollow of the tomb. All went, one by one, into the grotto where they knelt in prayer before the holy body, honoring it and taking leave of it. Then the tomb was shut in by a wicker screen that extended from the front edge of the tomb to the top of the vaulted wall above. Before the entrance of the grotto, they made a trench which they planted so thickly with blooming flowers and bushes covered with berries that one could gain access to it only from the side, and that only by making his way through the under-wood.

Before the Apostles left Mary's house to journey again into distant parts, they rendered the grotto of the tomb wholly inaccessible by raising an embankment of earth before the entrance. At the rear however they made a low passage to the back wall of the tomb proper and an opening in the wall, by which one could look down upon it. This passage was known only to the holy women. - The Death, Burial and Assumption of the Blessed Virgin Mary according to the Visions of Venerable Catherine Emmerich 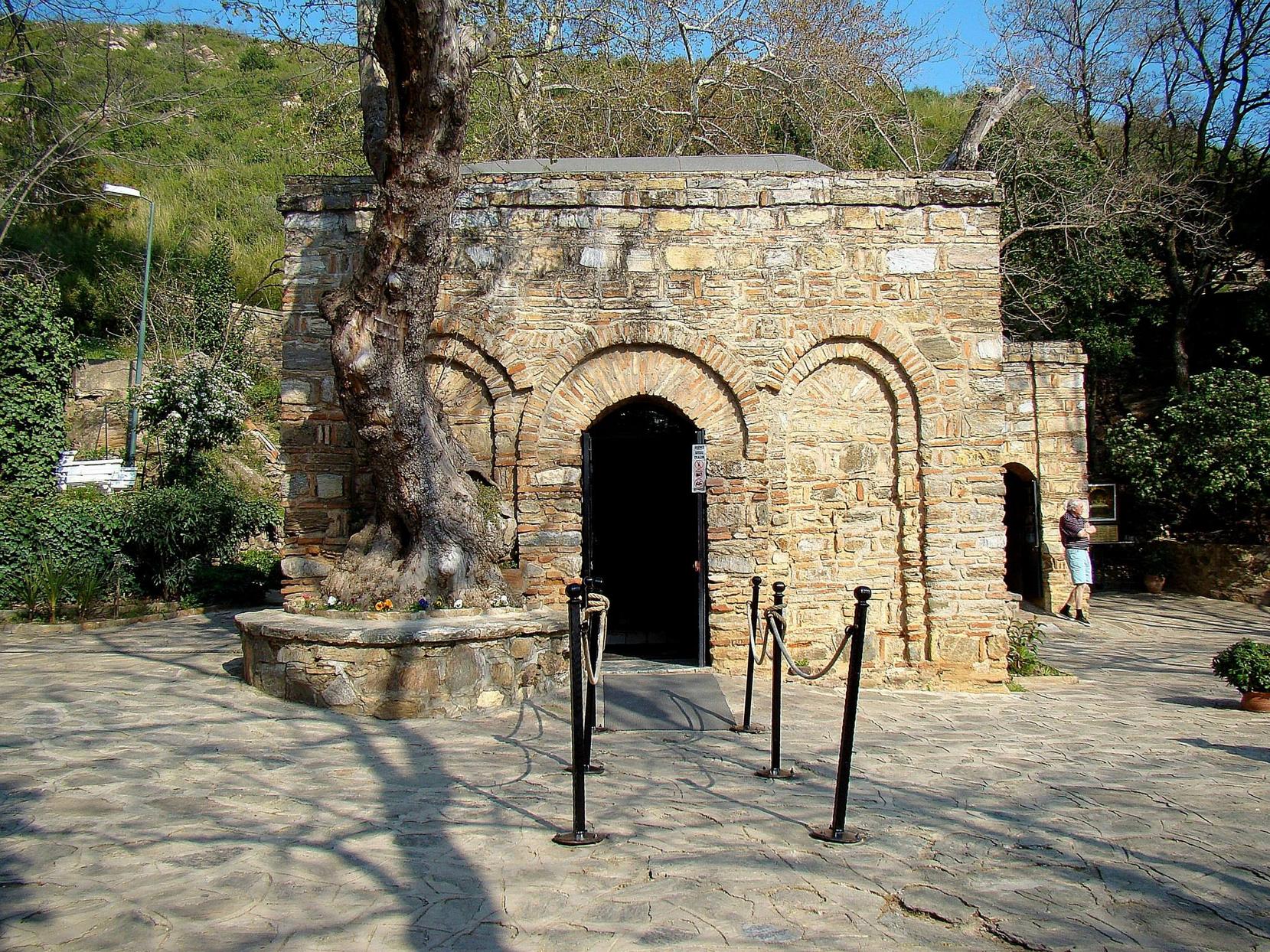 House of the Virgin Mary in Ephesus

Caveat: This question does not deny the possibility of other historical traditions, it simply would like to know: Is there are any modern archaeological searches for the Tomb of Mary, the Mother of Jesus at Ephesus (Selçuk, Turkey)?