Numerology and the Bible [closed]

Ask Question
Asked 10 years ago
Active 5 years, 2 months ago
Viewed 1k times
8
Closed. This question is opinion-based. It is not currently accepting answers.

The Bible has been the subject of many numerological attempts at applying greater / different meaning. The Bible Code being a popular example resulting in a book and a movie (at least one movie). My step-mother (raised Catholic) was a big fan of The Bible Code, but I never knew how to take it.

This isn't a reference to the meaning or symbology of the number 7 in the Bible, but instead to the practice of decoding the Bible by applying number patterns to it. 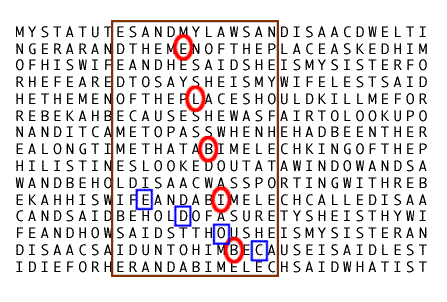 I've always considered Numerology to be a practice like Astrology. Is the application of it to the Bible accepted by Christians as another way that God speaks to man, or just more pop-theology?

Numbers are wonderfully flexible things that can manipulated into nearly any end result that the manipulator wants to see.

However, I have read of some amazing inferences which the Jewish Cabalists have drawn from the numbers of words, letters and etc. associated with the OT scripture, including some scientific predictions only proved true one and a half millennia later in the 20th century.

So I would approach the area with extreme caution, but not necessarily discard it outright without looking closer.

I found an excerpt from GL Schroeder's book Genesis and the Big Bang online. Note that I do no subscribe to Cabalist mysticism, but it's intriguing nonetheless. Cabalism is but a small part of the argument that Schroeder makes too, so don't make the mistake of assuming he all about ancient Jewish mysticism.

the Cabalists theorized that at the instant of creation, God, filling all eternity, contracted. Within that contraction, the universe expanded.

The Cabalists believed that only four of the ten dimensions are physically measurable within today's world. The other six contracted into submicroscopic dimensions during the six days of Genesis.

There was more in the book, and specifically about the conclusion they drew from the numbers of letters, words, syllable and correlations between verses on this basis.

The relevant books from Schroeder are:

(A word of caution, I have read one critique of Schroeder's Genesis and the Big Bang, stating he is a theistic evolutionist; I didn't see that, but it's been quite a few years since I read G&BB, so it could be his bent. I am an old-earth creationist, and I still think he is interesting reading).

Not the answer you're looking for? Browse other questions tagged numerology or ask your own question.

10
What's the deal with numbers?

16
Why is the number seven special?
4
Counterarguments to "Numerology"?
8
Is there a doctrine or Biblical justification that explains why God chose the number 7 to be so significant?
10
What is the significance of one-third in Revelation?
13
Did any early church fathers, other than Augustine, condemn or write about numerology?