Who are these people in this Catholic Reformation meme that are considered more influential than Martin Luther? 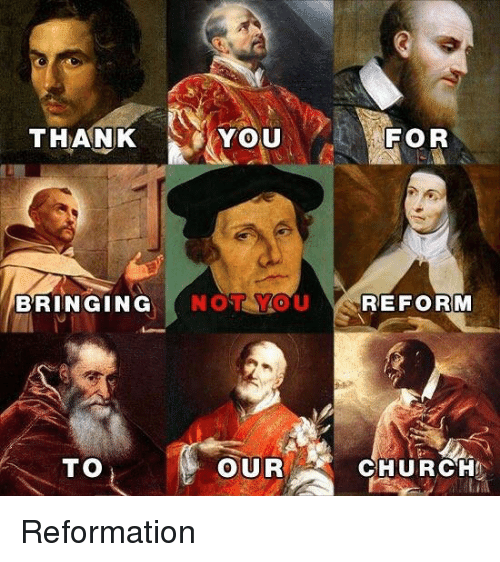 Who are these people, and what did they do that (in the minds of Catholics) reformed the Catholic Church more than Martin Luther did? (Luther is that middle square, if it wasn't obvious)

Who are these people in this Catholic Reformation meme that are considered more influential than Martin Luther?

They are as follows:

Luther didn't reform the Catholic church, he got all uptight about simony (which was already a grave sin) and took pot shots at the pope for laughs. If anything, he did inspire these fine people in one way or another to be better Christians so I think Catholics can thank him for that. But, to Catholics, it's probably more appropriate to thank God for that because it's God who brings goodness out of evil.

Not the answer you're looking for? Browse other questions tagged catholicism reformation .

9
Why are Independent Baptist Fundamentalists labelled Protestants?
15
Did Martin Luther believe the Church needed to be reformed before the Great Schism of 1054AD, or after?
18
What made Luther a heretic and not a schismatic?
10
When did Martin Luther begin to see the church as entirely apostate?
6
What contemporary criticism was given to Belloc's claim that the Protestant Reformation was the work of a few oligarchs?
6
What reforms did Erasmus seek for the church?
5
Which was the first Roman Catholic hymnal to include Martin Luther's "A Mighty Fortress Is Our God"?
4
Did the original reformers believe in a Magisterium?
1
Was Martin Luther wrong about baptizing infants?
3
What is a brief history of the term "reformed" as in Reformed churches and Reformed theology?