Should Christians have a conscience about pagan or idolatrous nomenclature?

Given that much of modern science is steeped in atheism/secular humanism/agnosticism, and that those who don't believe in magic or magic persons (God/gods/spirits/demons/fairies, etc.) ironically seem to have an appreciation and nostalgia or longing to create real magic.

Dr. William Schnoblen has stated that atheism is a common gateway to worshipping Satan.

So, it is no wonder that creators of computers and software have chosen naming conventions that can be seen as a gateway for demons and therefore cursing rather than blessing on the lives of those who use them. Anti-God and anti-Christ Jesus, rather than honoring God (YHWH).

The one example I am thinking of is: Daemon - a computer process that runs in the background "invisibly".

Christians have felt uncomfortable about nomenclature before.

George Fox, the founder of the Quaker movement (which today is a very different thing to the way in which George Fox lived and worshipped) disliked having to state the days of the week and months of the year as he felt their origin was heathen and idolatrous, related to Roman and Greek 'deities'.

So he used numbers instead and would say he did such and such on 'the third day of the fourth month' and so on.

Entries in George Fox's journal may be seen where he uses his own nomenclature.

There is a later discussion about the matter written by Henry J Cadbury in the 1920s.

I am aware of Christians today who follow the same custom and for the same reason.

By contrast, in his narrative of the Acts of the Apostles, Luke appears not to avoid mentioning that the Ephesians cried out 'Great is Diana ...' nor to avoid mentioning the ensign which a ship displayed, relating to 'Dioscuri' or the 'Twins' - deities whose name the Romans gave to the stars which we know as Castor and Pollux.

Thus I would suggest that these are matters of individual conscience.

However the Psalmist, David, makes it very clear that in matters related to homage and worship :

Their sorrows shall be multiplied that hasten after another god: their drink offerings of blood will I not offer, nor take up their names into my lips. [Psalm 16:4 KJV]

I'm going to answer by first analyzing the usage of names/brands, then incorporating it into morality.

By linguistic / sociological / business analysis, we can distinguish the following usage aspects of names / brands given to human-made programming techniques like Linux/Unix daemon and DOS terminate and stay resident (TSR) programs, or programming languages such as Python:

It's also helpful to make a few observations:

Moral aspects of using questionable names in a moral act

Names can play into a human act in a variety of ways:

In Christianity, a moral act starts with the intention and purpose in the mind, leading to the execution of the act with the body, and ends with the enjoyment of the act. A moral act has side effects in the world (affecting other people, culture, and environment) as well as in the soul (forming virtues / vices). Christianity provides an objective evaluation of the act, whether it is good or evil.

The biblical principle that applies to all Christians is that whatever does not come from faith [in God and in Christ Jesus] is sin (Romans 14:23).

The work we do, the way we spend our leisure time, the manner in which we interact with other people should reflect the faith and the hope we have in our Lord and Saviour. This honours God and is a witness to others.

Here is some sound biblical advice for Christians to take to heart and to apply to their lives:

Finally, brothers, whatever is true, whatever is noble, whatever is right, whatever is pure, whatever is lovely, whatever is admirable - if anything is excellent or praiseworthy - think about such things. Whatever you have learned or received or heard from me, or seen in me, put it into practice. And the God of peace will be with you (Philippians 4:8-9).

Christians should be guided by the promptings of the Holy Spirit. If their conscience is troubled by the sort of work they are doing, then they need to re-evaluate in light of pleasing God by living holy lives, lives that are above reproach, lest they stumble others.

The formulation of this question is a faulty generalization: it is not because some software project names that get inspiration from mythologies that all software naming is of such nature. A few examples: Lotus, Excel, Perl, C-Sharp, PHP, Node, Dart, Go, UnReal,....

Those who don't believe in magic or magic persons (God/gods/spirits/demons/fairies, etc.) ironically seem to have an appreciation and nostalgia or longing to create real magic.

It's not because you are an atheist that you can't appreciate mythology, enjoy the Lord of the Rings, or even study mythology academically. But I see no evidence for "longing to create real magic" to be more pervasive among atheists than among theists. People that go to Comic-Con may enjoy cosplay, but they generally don't think this imbues them with superpowers. And yes, there are Christian cosplayers too.

atheism is a common gateway to worshipping Satan.

Anti-God and anti-Christ Jesus, rather than honoring God

I would point out that the planets discovered during the supremacy of Christianity in Europe were all named after Greek and Roman deities, and names of days and months come from pagan deities. The Catholic Church did not attempt to rename any of this at any time in history.

You yourself probably use expressions like "Achilles heel" (a son of Zeus), or put up a Christmas tree, which was originally a pagan tradition. And let's not forget Halloween, wedding rings, fingers crossed, Groundhog Day, Lady Justice, Mother Earth, or the tooth fairy - to name but a few concepts and traditions with pagan origins.

Relating "Python" to a Mexican spirit is really stretching it.

"Terminate and Stay Resident" is simply Microsoft's version of the traditional "fork off and die" method for detaching processes from their parent processes. There is no reason to think it is related to a game company (one that actually competes with MS), simply because they share the same initials.

The other example is the only one worth discussing, since there really are deliberate similarities.

Biblically, demons are fallen angels. They are capable of possessing individual humans and animals, invisibly observing everything that the victims experience and able to alter their behaviour and speech.

People that "hears voices" telling them to do things are exhibiting symptoms of demon possession. Demons spend their time waiting for the right opportunity to make the person do something they wouldn't normally do.

In computers, a daemon is self-contained software that silently lurks in the background of the operating system. It observes what is happening on the computer and, when certain conditions are observed, it initiates specific actions that can potentially affect other software running on the computer.

A "printer daemon" for instance knows how to talk with printers, how to pass data to them, how to get them to print. It spends most of its time just sitting there, doing nothing, waiting for some other program to ask it to print something for them. That way no other software needs to know anything about how printers work; the daemon provides a common means of performing the task and everything associated with it.

In many ways, demons and daemons are very similar.

And in the computer world, no one believes that daemons are living or have anything resembling consciousness. The terminology is simply a conveniently descriptive simile.

The Complete FreeBSD contains an amusing story of one woman's encounter with what she calls "the original Texas rednecks", and their reaction to her BSD-Unix t-shirt: "Hmmm. Interesting. See, we was just wondering why it is you have the lord of darkness on your chest there.". 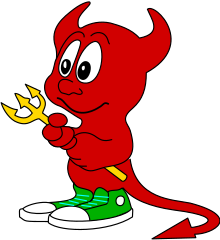 Not the answer you're looking for? Browse other questions tagged terminology demons technology .