Has anyone claimed to have had a "Damascus Road" calling to ministry, which later received trust and ministerial support from fellow Christians?

Has anyone claimed to have been called by God to ministry (e.g. to serve as a missionary, pastor, evangelist, prophet, apostle, etc.) through some dramatic "Road to Damascus" encounter (like the Apostle Paul in Acts 9), and subsequently counted with the trust and ministerial support from a community of fellow Christians who believed in their testimony and backed their ministry?

The Apostle Paul is an obvious example, but for the purposes of this question he obviously doesn't count. I'm interested in any examples from the 2nd century onwards, especially in modern times. Are there any modern (self-proclaimed) 'Apostle Pauls'?

I will share three notable examples I'm aware of. They are all relatively recent (1925 - present).

World Trumpet Mission, an international revivalist ministry founded in 1988 in the Republic of Uganda by John Mulinde, presents the following historical timeline on their website (emphasis mine): 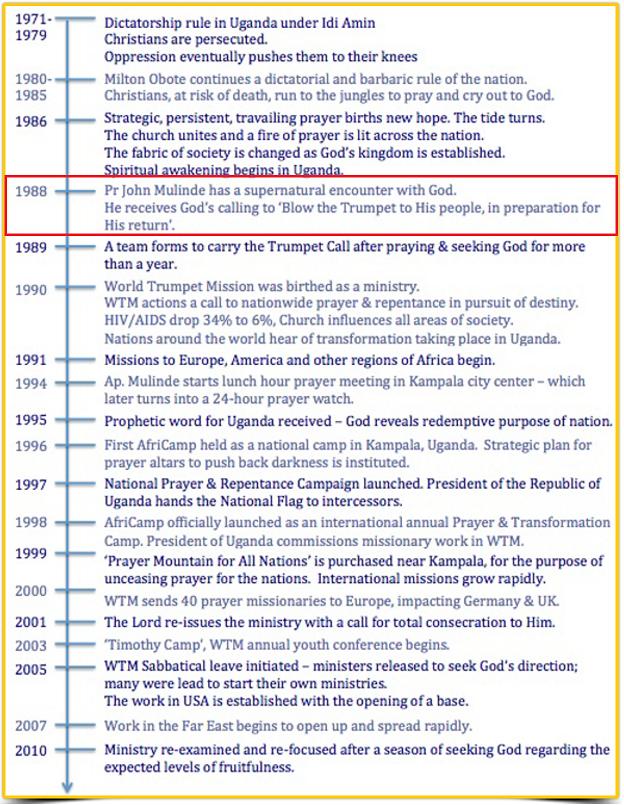 The transcript of the highlighted section reads:

1988 - Pr. John Mulinde has a supernatural encounter with God. He receives God's calling to 'Blow the Trumpet to His people, in preparation for His return.'

More details about this encounter can be found at https://worldtrumpet.wixsite.com/world-trumpet/the-testimony. Below some quotes with highlights of the testimony:

In 1988, in a small village in Uganda called Nakaseke, I had a supernatural visitation from the Lord, which totally changed my life. I can still recall the experience as if it just happened yesterday.

I lay on my face before Him, my body trembling terribly, as He spoke to me, revealing every detail of my life. His voice went through my entire being like blazing fire and as blinding light, at the time.

This was the most dramatic moment of my life and it has never faded in its intensity in my spirit.

LAMENTATIONS FOR THE CHURCH!

It was approximately a week after that initial visitation that I had another awesome encounter with Him, and again He spoke in an audible prophetic way. This time, the Lord spoke as one who sought understanding from a friend. He did not mention any of my failures and sins, nor even rebuke me for the state of my heart, but instead, he sorrowfully, talked at length, about the sad state in which His church was, worldwide.

He sobbed and wept over His people’s spiritual state. His voice was so full of anguish and pain that my own heart was wrung with pain and guilt. I mention guilt because everything He spoke about His Redeemed was just as true for me as it was for the others; yet He spoke to me as if I was not one of them. Hearing His voice so full of pain and grief just tore me apart, and I cried my own heart out. The air was charged with electrifying power, even more intense than what I had experienced on the first visitation.

For the interested reader, John Mulinde has authored books such as:

José Joaquín Ávila Portalatín (September 11, 1925 – June 28, 2013), better known as Yiye Ávila, was a Puerto Rican Pentecostal Evangelist and writer of Sephardic origins. His preaching and messages were characterized in proclaiming that the coming of Christ is imminent. He is considered one of the most influential Protestant preachers of the Spanish language. He was also the second runner-up for Mr. North America in 1953.

He began playing baseball in the Double A level and training as a weight lifter. In 1952, he competed and won the Mr. Puerto Rico bodybuilding contest, and would go on to become the second runner-up for the title of Mr. North America in 1953.[6]

While training for the summer Olympic Games of 1956, Ávila experienced terrible pain in parts of his body and, after various tests, was diagnosed with chronic arthritis by his doctors. This prevented him from participating in the Olympics or in any other future sporting event. The pain was so intense that Ávila suffered limited mobility and could not even perform everyday chores. He turned to Christianity and began praying, seeking divine intervention for his situation. According to him, he received a divine revelation through the reading and study of the Protestant Bible, where he received healing from Jesus Christ. From that time on, he dedicated himself to ministry.

Beginning in the 1970s, Yiye became a laborious evangelist, visiting almost all Latin American countries, many North American cities, and parts of Europe. He appeared on a daily morning telecast preaching selected verses from the Bible and receiving prayer petitions from viewers. He also appeared every Saturday night on the network's flagship show, Campaña Por TV (Campaigning Through TV), where he preached selected verses of the New Testament, presented Evangelical Christian music groups, and invited viewers to convert to Evangelical Christianity.

Additionally, for those who more or less understand Spanish, there are videos of him sharing his testimony at evangelistic crusades where he was the main preacher (e.g. here, here, here, here). In those testimonies he recounts extraordinary, supernatural experiences he had with the Lord Jesus Christ, including a physical visitation to his room to confirm his calling as an evangelist, his baptism in the Holy Spirit, his experiences during a 40-day fast, among others. He also authored a book titled "Mis experiencias con Jesús" (My experiences with Jesus), available as audiobook here and as pdf file here, where he shares many more extraordinary experiences he allegedly had with the Lord. 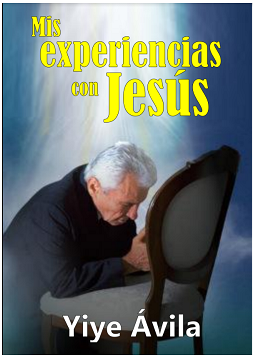 This is another revivalist Hispanic preacher, from Argentina. He authored the book "¡Oíme bien Satanás!" (Listen to me, Satan!), available here. The book's preface is self-explanatory:

This is the true story of Carlos Annacondia, whose faithfulness, devotion, and faith in signs and miracles brought about an awakening in Argentina that has spread throughout the world and continues to this day. Annacondia's ministry is marked by the same signs and wonders of the early church—sick bodies are healed, bondages are broken, the demonized are set free, oppression is lifted—and he knows these subjects as very few people do.

Listen to Me, Satan! is full of amazing testimonies that will renew, inspire, and charge your faith. It's the story of how one man confronted the devil, in the authority of the name of Jesus, and experienced extraordinary results. Join him on his journey from the poor villages of Buenos Aires to a global ministry, and find victory and freedom in your own life as well.

The evangelist says that he received a message from God in 1981 saying: “Soon, soon, soon. There will be a great revival in Argentina. Argentina will be mine, says the Lord.” Since then, his large-scale rallies, held in cooperation with local churches in towns and cities across the country, have drawn millions of people and seen thousands of new churches planted.

So I entered into a hall full of worship and adoration, accompanied by my wife and my children. I started to hear a voice talking to me. “Carlos, you’re so worried about life – for your children’s future, for your businesses – you are unhappy. Give me your heart, I will give you life.” It was the voice of the Lord Jesus. And I started to cry – and it wasn’t easy for me to cry, because I believed if you cry, you are not a man, and that’s what I told my wife as well: men do not cry. But that day I just broke down in tears.

Ten days after that experience, I received the baptism of the Holy Spirit. I remember having my hands up to heaven and suddenly I just felt this warmth, this fire that I could not control, and my whole body started to shake and I started to speak in a language that I’d never spoken before.

Things started to happen to me: I’d just be shaking hands with somebody, and the person would say, “Let go, I feel like electricity is in your hands!” I’d just visit somebody I knew, and encounter demonic manifestations with several members of the family that I was visiting. I didn’t yet know what that was, and I had to learn. [...] 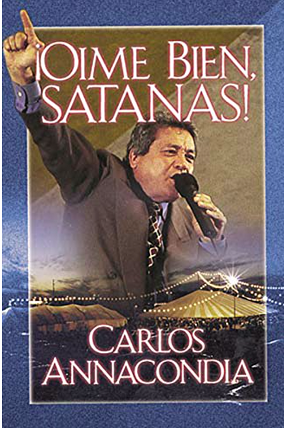 This is a very recent preacher that is gaining a lot of traction on YouTube. At the moment of writing this post (September 9th, 2021), his YouTube channel has 209K subscribers (update: 427K subscribers as of August 23rd, 2022), and he is frequently uploading content. He has shared his testimony on several occasions, which can be found in videos such as:

His personal website https://www.isaiahsaldivar.com/ has an "About me" section where he shares his testimony in written form. Below some highlights:

After the preacher taught a Spirit filled message regarding world missions and changing the world in the name of Jesus, Isaiah knew he couldn’t possibly stay in his seat any longer. By the end of the service, without thinking twice Isaiah ran to the altar and prayed a simple prayer that would change his entire life. He said, “God if you’re real, I’ll give you everything.” Instantly in power and in majesty, the Creator of all met Isaiah exactly where he was spiritually and physically. In an audible voice, Isaiah heard God clearly tell him, “I am going to use you to preach the gospel to every nation.”

Suddenly law enforcement, prestige, and partying all seemed empty. Undone and deeply repentant, Isaiah encountered peace, redemption and love all for the first time on what seemed like a normal Wednesday night. His encounter with God is beyond being able to fully describe, but Isaiah arrived to church that night as one man and went home as an entirely different man, in fact he left as a son.

Until 1947, Roberts struggled as a part-time preacher in Oklahoma, but when he was 29, Roberts said he picked up his Bible and it fell open at the Third Epistle of John, where he read verse 2: "I wish above all things that thou mayest prosper and be in health, even as thy soul prospereth." The next day, he said, he bought a Buick and God appeared, directing him to heal the sick.

I suspect that a large number of televangelists, and generally preachers who have become famous and wealthy through preaching, claim to be called directly by God in some fashion.

6
Has any reputable Christian claimed to have been physically visited by Jesus Christ Himself after Paul's conversion?
2
Besides Paul, have there been any other Christians who had both a scholarly background and overtly supernatural experiences?

2
Besides Paul, have there been any other Christians who had both a scholarly background and overtly supernatural experiences?
6
Has any reputable Christian claimed to have been physically visited by Jesus Christ Himself after Paul's conversion?