Has the phenomenon of being "slain in the Spirit" ever taken place spontaneously and unexpectedly outside of Pentecostal and charismatic circles?

The phenomenon of being "slain in the Spirit" was recently brought to my attention by a couple of very recent uploads. Here are a few additional examples if you want to see more (warning -- they can be a little bit shocking): 1, 2, 3.

According to Wikipedia, this is a phenomenon that is most commonly reported in group settings, at Pentecostal and charismatic church services, and my own experience watching many videos of people undergoing this phenomenon seems to corroborate this overall impression. And I can therefore perfectly understand why some might feel tempted to think that this is merely a "hyper-charismatic", "hyper-Pentecostal" thing, not really to be expected to happen outside of their circles. But, is this really the case?

Has the phenomenon of being "slain in the Spirit" ever been reported to take place outside of Pentecostal and charismatic congregations, spontaneously and unexpectedly, to people who had no prior conditioning in this regard?

Has the phenomenon of being “slain in the Spirit” ever taken place spontaneously and unexpectedly outside of Pentecostal and charismatic circles?

St. Paul tells us that the Good News is like a double-edged sword:

For the word of God is alive and active. Sharper than any double-edged sword, it penetrates even to dividing soul and spirit, joints and marrow; it judges the thoughts and attitudes of the heart. - Hebrews 4:12

Slain in the Spirit is a term that is loosely described in Wikipedia as follows:

Slain in the Spirit or slaying in the Spirit are terms used by Pentecostal and charismatic Christians to describe a form of prostration in which an individual falls to the floor while experiencing religious ecstasy. Believers attribute this behavior to the power of the Holy Spirit. Other terms used to describe the experience include falling under the power, overcome by the Spirit, and resting in the Spirit. The practice is associated with faith healing because individuals are often slain while seeking prayer for illness.

Outside these circumstances, the Church prefers to employ a term that closely has similarities, but at the same time has every different connotations about the subject matter.

Traditional Catholics would more likely call this a religious ecstasy.

Religious ecstasy is a type of altered state of consciousness characterized by greatly reduced external awareness and expanded interior mental and spiritual awareness, frequently accompanied by visions and emotional (and sometimes physical) euphoria.

Although the experience is usually brief in time, there are records of such experiences lasting several days or even more, and of recurring experiences of ecstasy during one's lifetime.

In the monotheistic tradition, ecstasy is usually associated with communion and oneness with God. However, such experiences can also be personal mystical experiences with no significance to anyone but the person experiencing them. Some charismatic Christians practice ecstatic states (such as "being slain in the Spirit") and interpret these as given by the Holy Spirit. The firewalkers of Greece dance themselves into a state of ecstasy at the annual Anastenaria, when they believe themselves under the influence of Saint Constantine.

Of the many examples of saints having a mystical ecstasy, I will limit myself to the example of St. Theresa of Avila in her now famous ecstasy involving the transverberation of her heart!

August 26th, Carmelites around the world celebrate the feast of the Transverberation (piercing) of St. Teresa of Avila’s heart. Transverberation is a mystical grace wherein the Saint’s heart was pierced with a “dart of love” by an angel. In Teresa’s own words from her autobiography we read:

“Our Lord was pleased that I should have at times a vision of this kind: I saw an angel close by me, on my left side, in bodily form. This I am not accustomed to see, unless very rarely. Though I have visions of angels frequently, yet I see them only by an intellectual vision, such as I have spoken of before. It was our Lord’s will that in this vision I should see the angel in this wise. He was not large, but small of stature, and most beautiful—his face burning, as if he were one of the highest angels, who seem to be all of fire: they must be those whom we call cherubim. Their names they never tell me; but I see very well that there is in heaven so great a difference between one angel and another, and between these and the others, that I cannot explain it.

“I saw in his hand a long spear of gold, and at the iron’s point there seemed to be a little fire. He appeared to me to be thrusting it at times into my heart and to pierce my very entrails; when he drew it out, he seemed to draw them out also, and to leave me all on fire with a great love of God. The pain was so great, that it made me moan; and yet so surpassing was the sweetness of this excessive pain, that I could not wish to be rid of it. The soul is satisfied now with nothing less than God. The pain is not bodily, but spiritual; though the body has its share in it, even a large one. It is a caressing of love so sweet which now takes place between the soul and God, that I pray God of His goodness to make him experience it who may think that I am lying.

“During the days that this lasted, I went about as if beside myself. I wished to see, or speak with, no one, but only to cherish my pain, which was to me a greater bliss than all created things could give me.

“I was in this state from time to time, whenever it was our Lord’s pleasure to throw me into those deep trances, which I could not prevent even when I was in the company of others, and which, to my deep vexation, came to be publicly known. Since then, I do not feel that pain so much, but only that which I spoke of before—I do not remember the chapter —which is in many ways very different from it, and of greater worth. On the other hand, when this pain, of which I am now speaking, begins, our Lord seems to lay hold of the soul, and to throw it into a trance, so that there is no time for me to have any sense of pain or suffering, because fruition ensues at once. May He be blessed for ever, who hath bestowed such great graces on one who has responded so ill to blessings so great!”

Nine months after St. Teresa died in 1582, she was exhumed and her body was found to be incorrupt. Later, her heart was removed, enclosed in a crystal vessel and placed in a jeweled silver reliquary. While this was being done they beheld a glorious and wonderful sight: a wound from the angel’s dart was visible! It can still be seen today at the Carmelite Monastery of Alba de Tormes in Spain. Her heart has kept is color and since the nineteenth century three sharp thorns are visible at the base of her heart. 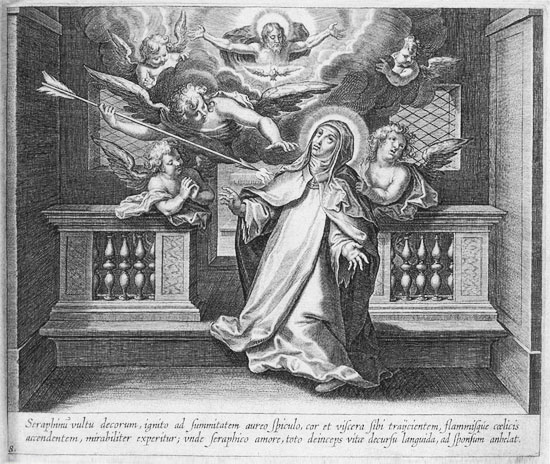 The Transverberation of Saint Teresa of Avila

The Carmelite Order celebrates the Transverberation of St. Theresa’s Heart every August 26!

Not the answer you're looking for? Browse other questions tagged church-history pneumatology pentecostalism charismatic .

6
Reformed Theology, Pentecostalism, and Charismatic Movement on The Holy Spirit
9
What is the biblical basis for the concept of being "slain in the spirit" and what exactly is it?
3
What connection does the Jesus movement and the pentecostal/charismatic movement have, if any?
2
Are there any accounts of "words of knowledge" taking place outside of Pentecostal and Charismatic denominations?
1
What is the difference between an apostle and a missionary according to Pentecostal & Charismatic Christianity?
1
Can the Pentecostal/Charismatic belief in "territorial spirits" and "Strategic-Level Spiritual Warfare" be traced back to prior sources?