Is Luke 12:50 where Roman Catholics get the concept of baptism by blood?

I have a baptism to be baptized with, and how great is my distress until it is accomplished! (Luke 12:50, ESV)

The criminal on the cross Jesus said was saved had no opportunity for water baptism, but Roman Catholic doctrine says he was baptized by blood.

One of the criminals who were hanged railed at him, saying, “Are you not the Christ? Save yourself and us!” 40 But the other rebuked him, saying, “Do you not fear God, since you are under the same sentence of condemnation? 41 And we indeed justly, for we are receiving the due reward of our deeds; but this man has done nothing wrong.” 42 And he said, “Jesus, remember me when you come into your kingdom.” 43 And he said to him, “Truly, I say to you, today you will be with me in paradise.” (Luke 23:39–43, ESV)

St. Alphonsus Ligouri defines the baptism of blood (sanguinis) as:

The baptism of blood is the shedding of blood, or death suffered for the faith or for some other Christian virtue... this baptism... remits the fault and the punishment due sin (Theologia Moralis, Tomus III, Tract II, author’s translation). -- from http://archives.sspx.org/miscellaneous/feeneyism/three_baptisms.htm

Is Luke 12:50 where Roman Catholics get the concept of baptism by blood?

But I have a baptism to undergo, and what constraint I am under until it is completed! - Luke 12:50

While St. Luke in his Gospel seems to be pointing that way. The annotation of the 1582 edition of the Rheims New Testament points to a verse from the Gospel of St. John as to be the inspiration of the concept for the term: baptism by blood.

The Catholic 1582 Rheims New Testament, the first published tome of the Douay-Rheims Bible, specifically notes in its annotations to John 3:5 both the necessity of Baptism and the availability of Baptism of Desire and Baptism of Blood. The Catholic Church had been expelled from England at the time of the production of the Bible and many annotations were designed to assist lay Catholics to keep to their faith in the absence of clergy.

The Original and True Rheims New Testament of Anno Domini 1582

JESUS answered, and said to him, Amen, Amen I say to thee, Unless a man be born again, he can not see the kingdom of God. - John 3:5

The actual annotation reads as follows:

Born again of Water. As no man can enter into this world nor have his life and being in the same, except he be born of his carnal parents: no more can a man enter into the life and state of grace which is in Christ, or attain to life everlasting, unless he be born and baptized of water and the Holy Ghost. Whereby we see first, this Sacrament to be called our regeneration or second birth, in respect of our natural and carnal which was before. Secondly, that this sacrament consisteth of an external element of water, and internal virtue of the Holy Spirit: Wherein it excelleth John's baptism, which had the external element, but not the spiritual grace. Thirdly, that no man can enter into the Kingdom of God, nor into the fellowship of Holy Church, without it.

Whereby the Pelagians, and Calvinists be condemned, that promise life everlasting to young children that die without baptism, and all other that think only their faith to serve, or the external element of water superfluous or not necessary: our Saviour's words being plain and general. Though in this case, God which hath not bound his grace, in respect of his own freedom, to any Sacrament, may and doth accept them as baptized, which either are martyred before they could be baptized, or else depart this life with vow and desire to have that Sacrament, but by some remediless necessity could not obtain it. Lastly, it is proved that this Sacrament giveth grace ex opere operator, that is, of the work itself (which all Protestants deny) because it so breedeth our spiritual life in God, as our carnal birth giveth the life of the world.

Catholicism honours several saints as Christian Martyrs even though they were not baptized.

St. James the Apostle, according to tradition, was martyred with one of his accusers who moved by his confession, became himself a Christian, and they were beheaded together. 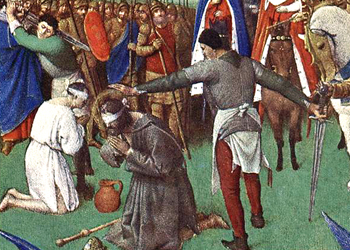 The martyrdom of James (grey) and his accuser (white)

On the last journey to Jerusalem, their mother Salome came to the Lord and said to Him: "Say that these my two sons may sit, the one on thy right hand, and the other on thy left, in thy kingdom" (Matthew 20:21). And the two brothers, still ignorant of the spiritual nature of the Messianic Kingdom, joined with their mother in this eager ambition (Mark 10:37). And on their assertion that they are willing to drink the chalice that He drinks of, and to be baptized with the baptism of His sufferings, Jesus assured them that they will share His sufferings (Mark 10:38-39).

James won the crown of martyrdom fourteen years after this prophecy, A.D. 44. Herod Agrippa I, son of Aristobulus and grandson of Herod the Great, reigned at that time as "king" over a wider dominion than that of his grandfather. His great object was to please the Jews in every way, and he showed great regard for the Mosaic Law and Jewish customs. In pursuance of this policy, on the occasion of the Passover of A.D. 44, he perpetrated cruelties upon the Church, whose rapid growth incensed the Jews. The zealous temper of James and his leading part in the Jewish Christian communities probably led Agrippa to choose him as the first victim. "He killed James, the brother of John, with the sword." (Acts 12:1-2). According to a tradition, which, as we learn from Eusebius (Church History II.9.2-3), was received from Clement of Alexandria (in the seventh book of his lost "Hypotyposes"), the accuser who led the Apostle to judgment, moved by his confession, became himself a Christian, and they were beheaded together. As Clement testifies expressly that the account was given him "by those who were before him," this tradition has a better foundation than many other traditions and legends respecting the Apostolic labours and death of St. James, which are related in the Latin "Passio Jacobi Majoris", the Ethiopic "Acts of James", and so on. - St. James the Greater

Martyrdom of Philemon, Apollonios, Areianos and their companions

In the third year of Diocletian’s reign, *Asklas and Leoneides are martyred under Areianos, governor of the Thebaid. Areianos also has a group of 37 prominent Christians tortured and put to death. Among them was the reader Apollonios who lost his courage, seeing the torments. Apollonios calls Philemon, the governor’s flute player, and offers him four golden coins as a bribe, in order to go and offer sacrifice in his place, wearing his cloak. Philemon puts on the cloak and appears before the governor, with his face covered. He refuses to offer sacrifice and declares his Christian faith. The governor, without recognising him, summons Philemon, hoping that he could change the mind of the Christian by his music. Unable to find him, the soldiers bring Philemon’s brother, Theonas, who reveals the disguised Philemon to the governor. Areianos asks the crowd what he should do with Philemon, and they request to spear the man who entertains them with his music. Areianos threatens him with a death which will not count as martyrdom, because he is unbaptised. Philemon asks for somebody from the crowd to come and baptise him, but no-one dares. He then prays and a cloud of water appears from heaven and baptises him.

Baptism of blood signifies martyrdom of an umbaptised person, that is, the patient bearing of a violent death or of an assault which of its nature leads to death, by reason of one's confession of the Christian faith, or one's practice of Christian virtue.

St. Varus is considered a saint and martyr in both the Catholic and Orthodox Churches. He was unbaptized when he suffered martyrdom.

Martyr Varus lived in Egypt during the period of several persecutions against Christians (late third to early fourth century). Varus (Ouaros) was a military commander and secretly a Christian. He gave assistance to many of the persecuted and imprisoned Christians, and he visited the prisoners at night. He also brought food to the prisoners, dressed their wounds, and gave them encouragement.

Once Varus spent a whole night talking with seven imprisoned monks. These men were Christian teachers who had been beaten and starved. Varus marched with the teachers when they were led to their execution. The judge, seeing Varus’ strong faith, had him fiercely beaten. Varus died during the beating. After his death, the monks were beheaded. - Martyr Varus, and seven Monastic Martyrs with him

Saint Varus and Praying for Those Who Died Unbaptized

Not the answer you're looking for? Browse other questions tagged catholicism .

10
According to Roman Catholic doctrine, does the incorruptible body possess blood?
15
Do Roman Catholics believe Saints are omnipresent?
2
Where do I go to get official Catholic answers?
2
Do non-Catholics get protection by confessional seal?
5
How do Roman Catholics interpret Luke 4:13, regarding the devil leaving Jesus "until an opportune time"?
7
Marriage between syrian catholics and roman catholics?
2
According to Catholics, when is Luke 22:8?
0
What is the Roman Catholic Church's views about Luke 14:32?
1
How did traditional Catholic teachings s determine the sides on which the Good Thief and the Bad Thief respectively hanged?**
12
A problem with Purgatory: How could Jesus say what he did to the repentant criminal on a cross next to him if Purgatory existed?