This seems to be a traditional belief. For example, The Catholic Encyclopedia entry from 1910 says

"It is also believed, and with great probability, that, with his friend Polycarp, he was among the auditors of the Apostle St. John."

Yet it gives no explicit reason why it is believed with great probability.

A Q & A answerer here says

"Ignatius of Antioch doesn't mention any personal connection to John in his authentic letters. Irenaeus mentions that he met Polycarp, who had known John and at least one other apostle, as he refers to "apostles" in the plural being known to Polycarp (Against Heresies 3.3). Ignatius did write letters to Polycarp and to the church at Smyrna. There are two letters of Ignatius to John preserved in Latin, but these are universally recognized as forgeries dated to the middle ages. There's no reliable evidence to connect Ignatius directly with any of the apostles. So, as you say, this is likely a case of "tradition based on forgery.""

Is this correct - is the idea that Ignatius of Antioch knew the Apostle John based solely on forged letters?

This information comes from Jerome.

John the Apostle survived all the way to the time of Trajan: after whom his notable disciples were Papias, Bishop of Hieropolis, Polycarp of Smyrna, and Ignatius of Antioch. (pp. 275-276)

Multiple Christian writers speak of Ignatius' association with one or more apostles, but it is Jerome that gives this specific detail. The level of confidence that should be placed in Jerome is a separate topic, but either way, there is no need to appeal to letters forged in Ignatius' name long after the time of Jerome.

It is simply a tradition with a lower class “t”! Not all traditions are verifiable, although many are. This is not part of what the Catholic Church understands as being part of Sacred Tradition with a capital “T”.

St. Paul even speaks about holding to the traditions which were we learned, “whether by word, or by our epistle.”

14 Therefore, brethren, stand fast; and hold the traditions which you have learned, whether by word, or by our epistle.

15 Now our Lord Jesus Christ himself, and God and our Father, who hath loved us, and hath given us everlasting consolation, and good hope in grace,

According to Irenaeus, Polycarp was a companion of Papias, another "hearer of John", and a correspondent of Ignatius of Antioch. Ignatius addressed a letter to him and mentions him in his letters to the Ephesians and to the Magnesians.

It can be inferred that Ignatius knew St. John the Apostle!

The same will hold fast to bases of whether St. Ignatius truly knew St. John the Apostle. It is a tradition. Not all traditions are verifiable or even true. But that does not mean that they are a ”case of "tradition based on forgery." That claim is outrageous false!

If others desire to hold that our tradition is all false, good for them. Even the Catholic Encyclopedia article which you sited make reference to these spurious letters attributed to St. Ignatius of Antioch. The tradition in question predates these letters.

The oldest collection of the writings of St. Ignatius known to have existed was that made use of by the historian Eusebius in the first half of the fourth century, but which unfortunately is no longer extant. It was made up of the seven letters written by Ignatius whilst on his way to Rome; These letters were addressed to the Christians

We find these seven mentioned not only by Eusebius (Church History III.36) but also by St. Jerome (De viris illust., c. xvi). Of later collections of Ignatian letters which have been preserved, the oldest is known as the "long recension". This collection, the author of which is unknown, dates from the latter part of the fourth century. It contains the seven genuine and six spurious letters, but even the genuine epistles were greatly interpolated to lend weight to the personal views of its author. For this reason they are incapable of bearing witness to the original form. The spurious letters in this recension are those that purport to be from Ignatius:

It is extremely probable that the interpolation of the genuine, the addition of the spurious letters, and the union of both in the long recension was the work of an Apollinarist of Syria or Egypt, who wrote towards the beginning of the fifth century. Funk identifies him with the compiler of the Apostolic Constitutions, which came out of Syria in the early part of the same century. Subsequently there was added to this collection a panegyric on St. Ignatius entitled, "Laus Heronis". Though in the original it was probably written in Greek, it is now extant only in Latin and Coptic texts. There is also a third recension, designated by Funk as the "mixed collection". The time of its origin can be only vaguely determined as being between that of the collection known to Eusebius and the long recension. Besides the seven genuine letters of Ignatius in their original form, it also contains the six spurious ones, with the exception of that to the Philippians.

In this collection is also to be found the "Martyrium Colbertinum". The Greek original of this recension is contained in a single codex, the famous Mediceo-Laurentianus manuscript at Florence. This codex is incomplete, wanting the letter to the Romans, which, however, is to be found associated with the "Martyrium Colbertinum" in the Codex Colbertinus, at Paris. The mixed collection is regarded as the most reliable of all in determining what was the authentic text of the genuine Ignatian letters. There is also an ancient Latin version which is an unusually exact rendering of the Greek. Critics are generally inclined to look upon this version as a translation of some Greek manuscript of the same type as that of the Medicean Codex. This version owes its discovery to Archbishop Ussher, of Ireland, who found it in two manuscripts in English libraries and published it in 1644. It was the work of Robert Grosseteste, a Franciscan friar and Bishop of Lincoln (c. 1250). The original Syriac version has come down to us in its entirety only in an Armenian translation. It also contains the seven genuine and six spurious letters. This collection in the original Syriac would be invaluable in determining the exact text of Ignatius, were it in existence, for the reason that it could not have been later than the fourth or fifth century. The deficiencies of the Armenian version are in part supplied by the abridged recension in the original Syriac. This abridgment contains the three genuine letters to the Ephesians, the Romans, and to Polycarp. The manuscript was discovered by Cureton in a collection of Syriac manuscripts obtained in 1843 from the monastery of St. Mary Deipara in the Desert of Nitria. Also there are three letters extant only in Latin. Two of the three purport to be from Ignatius to St. John the Apostle, and one to the Blessed Virgin, with her reply to the same. These are probably of Western origin, dating no further back than the twelfth century. - St. Ignatius of Antioch

For those Catholics and Orthodox who accept this tradition, it is not based on any letter of St. Ignatius. It has come down to us from time immemorial from the descendants of St. Ignatius’ time. This does not make it true or false, but simply unverifiable. So be it. If others desire to criticize our traditions so be it. It will not change my mind.

Here follows what the Catholic Encyclopedia has to say about St. Ignatius of Antioch:

Also called Theophorus (ho Theophoros); born in Syria, around the year 50; died at Rome between 98 and 117.

More than one of the earliest ecclesiastical writers have given credence, though apparently without good reason, to the legend that Ignatius was the child whom the Savior took up in His arms, as described in Mark 9:35. It is also believed, and with great probability, that, with his friend Polycarp, he was among the auditors of the Apostle St. John. If we include St. Peter, Ignatius was the third Bishop of Antioch and the immediate successor of Evodius (Eusebius, Church History II.3.22). Theodoret ("Dial. Immutab.", I, iv, 33a, Paris, 1642) is the authority for the statement that St. Peter appointed Ignatius to the See of Antioch. St. John Chrysostom lays special emphasis on the honor conferred upon the martyr in receiving his episcopal consecration at the hands of the Apostles themselves ("Hom. in St. Ig.", IV. 587). Natalis Alexander quotes Theodoret to the same effect (III, xii, art. xvi, p. 53). 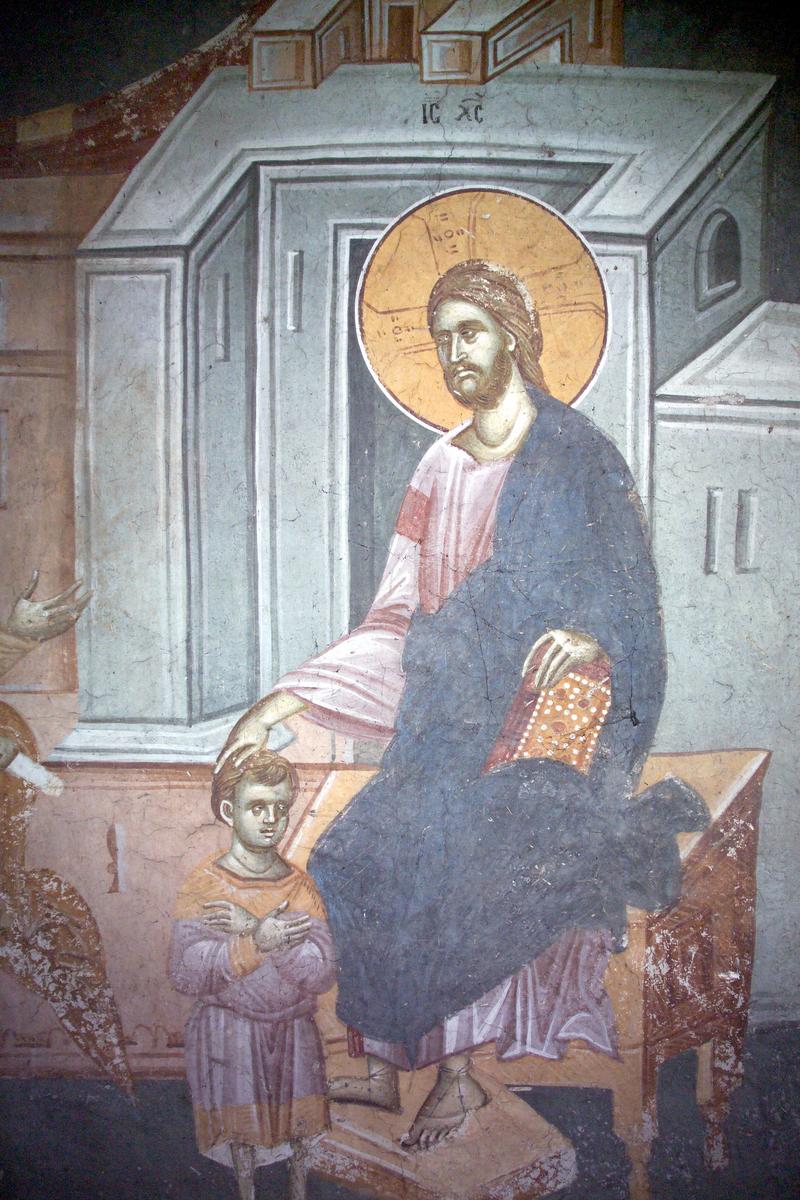 Detail from a fresco depicting Christ picking up the child St. Ignatius, from the account in the Gospel of St. Matthew 18:4.