Was Noah and/or his family fully or partially descendant from Cain?

According to Genesis, Cain is the forefather of tent-dwelling pastoralists (nomadic herders?), lyre/pipe players and bronze and iron smiths. Some also say that the descendants of Cain account for the sin and evil found in humanity. However, for this to have been passed along, some of Cain's descendants must have survived the flood. According to my understanding of the scripture, the only breathing survivors of the flood were those present on the Ark. So, does this mean that Noah and/or his family had some level of descendance from Cain? Or, did descendants from Cain possibly survive the flood somehow, without being saved by the Ark?

Something that may be relevant to this is the fact that there are two pairs of name-brothers in Cain and Seth's lineages; Enoch and Lamech.

Was Noah and/or his family fully or partially descendant from Cain?

Yes it seems possible, perhaps not provable, but how could anyone say for sure? Genesis - it simply does not give the ancestry for any of the women. Of course the idea that Cain is responsible for sin and evil being in humanity is just patently false. That would truly have been Adam and Eve! 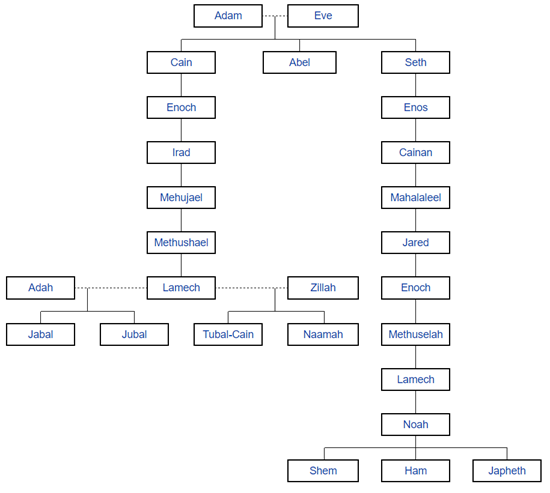 The genealogies of Genesis provide the framework around which the Book of Genesis is structured.1 Beginning with Adam, genealogical material in Genesis 4, 5, 10, 11, 22, 25, 29-30, 35-36, and 46 move the narrative forward from the creation to the beginnings of Israel's existence as a people.

Adam's lineage in Genesis contains two branches: Chapter 4 giving the descendants of for Cain, and Chapter 5 that for Seth that is then continued in later chapters. Chapter 10 gives a Table of Nations that records the populating of the Earth by Noah's descendants, and is not strictly a genealogy but an ethnography. Genesis 5 and 11 include the age at which each patriarch had the progeny named as well as the number of years he lived thereafter. Many of the ages given in the text are implausibly long, but could have been considered modest in comparison to the ages given in other works (for instance, the Sumerian King List). The ages include patterns surrounding the numbers five and seven, for instance the 365 year life of Enoch (the same as the number of full calendar days in a solar year) and the 777 year life of Lamech (repetitional emphasis of the number seven). Overall, the ages display clear mathematical patterns, confirming that number symbolism was used to construct them.

Nevertheless, since Genesis 5 and 11 provide the age of each patriarch at the birth of his named descendant, it also appears to present a gapless chronology from Adam to Abraham, even if the named descendant is not always a first-generation son.

Three versions of the Genesis genealogy exist: the Hebrew Masoretic Text, the Greek Septuagint, and the Samaritan Pentateuch. Translations from the Masoretic Text are preferred by Western Christians, including Roman Catholics and Protestants and by followers of Orthodox Judaism, whereas the Greek version is preferred by Eastern Christians, including Eastern Orthodox, Coptic, Ethiopic, Jacobite and Armenian. The Samaritan version of the Pentateuch is used mainly by the Samaritans.

Genesis gives Adam and Eve three children, named Cain, Abel and Seth. A genealogy tracing the descendants of Cain is given in Genesis 4, while the line from Seth down to Noah appears in Genesis 5. Scholars have noted similarities between these descents: most of the names in each are variants of those in the other, though their order differs, with the names of Enoch and Mahalalel/Mehujael switching places in the two pedigrees. It is "as if they were different versions of the same underlying tradition." This has led to speculation that a single original genealogical descent had diverged during independent transmission, only to be brought back together and put to different uses when the Book of Genesis was compiled from its Jahwist and Priestly sources.

Yes there are in fact two pairs of name-brothers in Cain and Seth's lineages; Enoch and Lamech. But that proves nothing more than some names are more popular than others. Nevertheless, there will always be diverse manners of translation to explain this seemingly awkwardness away.

Lamech is a person in Cain's genealogy in the fourth chapter of the Book of Genesis. He is a sixth-generation descendant of Cain (Genesis 4:18); his father was named Methushael, and he was responsible for the "Song of the Sword". He is also noted as the first polygamist mentioned in the Bible, taking two wives, Adah and Zillah (Tselah). Coincidentally this Lamech is distinguished from the other Lamech mentioned subsequently in Genesis (5:25 - 5:28) who was a descendant of Adam's third son Seth.

There is no historical proof or biblical evidence of who was Noah’s wife, but some Jewish traditions names her as Naamah. Thus we can see how the persons of some commonly name biblical personages adds to much confusion when tradition comes into the mix.

While there are many examples of strong and inspiring men and women in Genesis, the book is also packed with stories of dysfunctional families, which is evidenced from the very beginning with the first family: Adam, Eve and their two children, Cain and Abel. In no short amount of time—just 16 verses after announcing the birth of Cain and Abel in Genesis 4. Cain had murdered his younger brother and is consequently exiled from the land. In theory, this would have dropped the world’s population from four down to three. The narrative continues in Genesis 4 with Cain settling in the land of Nod and having children with his wife. Who did Cain marry? Where did she come from? Are there other people outside of Eden?

Given that the wife of Cain is only mentioned once in the Old Testament, she would not be counted among the famous women in Genesis. Nevertheless, her identity is still worth investigating. Who did Cain marry? Mary Joan Winn Leith first explores the traditional Jewish and Christian answers that contend that the wife of Cain was another daughter of Adam and Eve. According to this reasoning, Cain would have married his sister—one of Abel’s twin sisters no less, according to the Genesis Rabbah. - Who Was the Wife of Cain?

Not the answer you're looking for? Browse other questions tagged sin flood-of-noah cain noah enoch or ask your own question.

11
Did God's curse on Cain extend to only Cain, Cain's descendants or to everyone?
8
Was Cain a descendant of the serpent, through Eve?
2
According to SDA understanding did Methuselah preach just before the flood?