What is the oldest recorded filmed Catholic mass?

Where can I view the oldest filmed recording of a mass?

The Midnight Mass of Christmas in 1943 from the then Cathedral of Saint Vibiana, Los Angeles was included in the film Christmas Holiday starring Deanna Durbin and Gene Kelly, released in 1944.

Because there is no studio lighting, the sequence is really dark, but they filmed the actual mass. 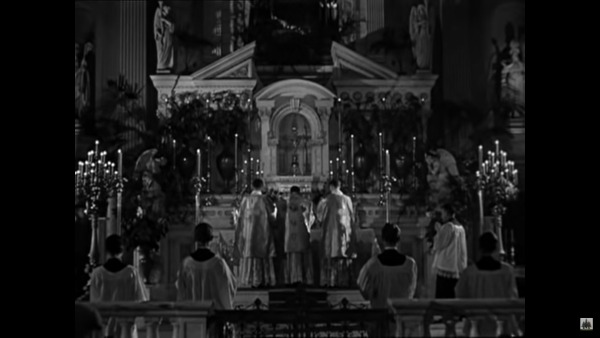 What is the oldest recorded filmed Catholic mass?

The first complete televised Catholic Mass was on Christmas Eve 1948.

Andrew Leach’s answer puts forth a earlier date of 1943, which in a sense is true, but it is not of a complete Catholic Mass and is simply part of the movie: Christmas Holiday! If the Mass within the Christmas Holiday has the act of consecration by a priest in it, I would consider the movie as genuinely portraying a Catholic Mass. If not, I would not consider it as portraying a Catholic Mass. (I can not verify this in Canada, due to copyright restrictions in place here!)

On Christmas Eve in 1948, Fr Raymond Pichard, O.P., in agreement with the Société française de Télévision, had the good idea of the first-ever world-wide broadcast of the Midnight Mass celebrated in the Cathedral of Notre-Dame de Paris. On the occasion of the 50th anniversary of this event, which marked an important turning point in the proclamation of the Gospel, I willingly join in prayer all who contribute to the broadcast Le Jour du Seigneur, the pastors and faithful who are once again gathered in Notre-Dame de Paris on this occasion and all those who are following Christmas Mass on radio and television.

Through the media, the French public transmission offers Catholics and people of goodwill the opportunity to see or hear religious broadcasts: this also permits members of the faithful who are unable to go for serious reasons to participate in the Eucharistic celebration, especially on the days and times which, for the Christian community, are dedicated to Sunday and feast-day gatherings. This Christian presence over the air is part of the tradition of dialogue and openness which do France honour.

I ask Christ, whose birth among men we celebrate on this most holy night, to be close to all who are taking part in this liturgy or joining in it thanks to the media. May the Saviour, who came to bring peace to the world, give comfort and hope to all people of goodwill, so that together they can build a society of justice and love! On the occasion of this 50th anniversary of the televised broadcast of Mass, I cordially impart my Apostolic Blessing to all who contribute to this broadcast and its transmission, as well as to the celebrants, preachers, Christian communities and faithful who join in the liturgy by means of radio and television.

Where can I view the oldest filmed recording of a mass?

The first Catholic Mass was aired by the French broadcasting company Le Jour du Seigneur in 1949.

The oldest French television series that is still running. Since 1949, it has aired every Sunday morning for an hour and a half. The program airs Catholic religious ceremonies, interviews and testimonials.

Until I can find a complete source, please accept a partial viewing of this mass from a French YouTube video: Messe de Noël 1948 (INA)

Hopefully I will be able to find the complete Mass for you shortly.

Not the answer you're looking for? Browse other questions tagged catholicism church-history mass technology entertainment or ask your own question.

27
What is the oldest hymn (with music) that is still sung in churches today?
12
Format for the Catholic Mass
11
How would a Catholic explain the absence of the mass in the Epistle to the Hebrews?
10
Which liturgical rites (forms of Mass) are presently used in the Roman Catholic Church?
3
Can a Uniate (Eastern) Catholic priest celebrate the Mass according to the Latin Rite?
4
Funeral Mass vs. Mass for the Deceased
5
Could a Catholic priest potentially use a digital tablet (iPad, etc.) for the Lectionary or the Book of the Gospels during mass?
2
What is the purpose of the Penitential Rite in a Catholic Mass?
2
How much of the Catholic Mass is inherited from the Jewish Shabbat service?
2
Where in the Catholic Church is red wine used for mass?