What is the meaning of the three letters in the halo of the Acheiropoieta?

I heard in a tour of a Greek Orthodox church that the letters refer to God's revelation of his name in Exodus 3. However, the crucial words in the Septuagint - the historic Greek-language version of the Old Testament - are ἐγώ εἰμι ὁ ὤν ("I am who I am"). None of these words includes the letter eta.

Is it that case that the three letters are actually omicron, omega, nu - which is to say that they spell out ὁ ὤν ("the one who is")? 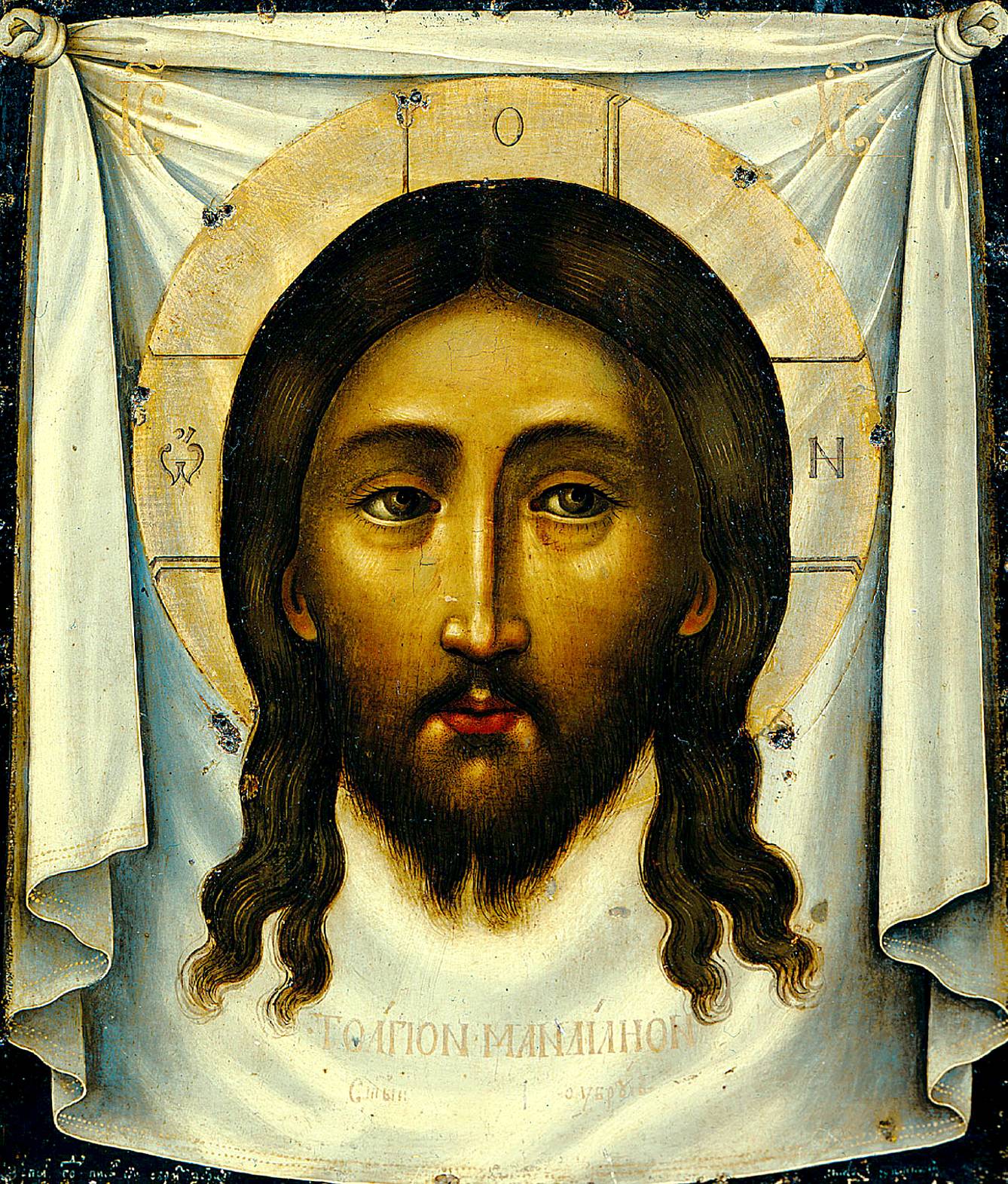 eastern-orthodox iconography russia
Share
Improve this question
edited May 13 at 17:50

What is the meaning of the three letters in the halo of the Acheiropoieta? 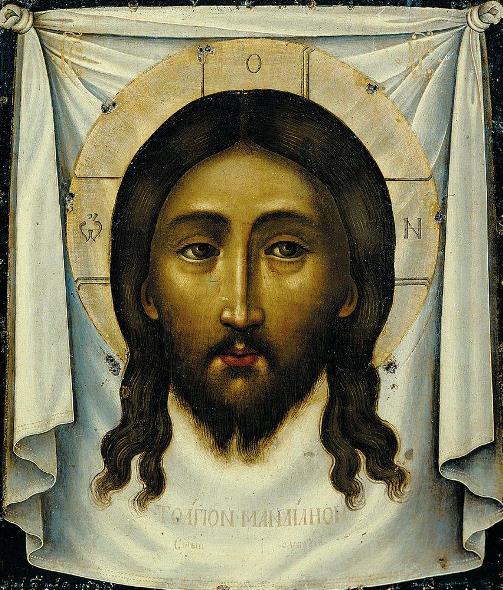 Image of the Savior Nerukotvorniy (Made Without Hands): a traditional Orthodox iconography in the interpretation of Simon Ushakov (1658).

So what are the origins of Ὁ ὬΝ in the halo of Christ?

Your hunch is quite correct. These letters form the present participle, ὤν, of the Greek verb to be, with a masculine singular definite article, ὁ. A literal translation of Ὁ ὬΝ would be “the being one,” which does not mean much. “He who is” is a better translation. These words are the answer Moses received on Mount Sinai when he asked for the name of him to whom he was speaking. In Hebrew, he who was speaking said Yahweh, which is also a present participle. Greek translators of the Hebrew Bible put Yahweh as Ὁ ὬΝ.

We are so used to seeing the features of Christ in icons that we no longer pay attention to them, thinking they have always been there, as we see them, taking them for granted. We have perhaps forgotten that behind each feature there is a history and a theological meaning to discover and rediscover. So it is for the three Greek letters found in Christ’s cruciform halo.

These letters form the present participle, ὤν, of the Greek verb to be, with a masculine singular definite article, ὁ. A literal translation of Ὁ ὬΝ would be “the being one,” which does not mean much. “He who is” is a better translation. These words are the answer Moses received on Mount Sinai when he asked for the name of him to whom he was speaking. In Hebrew, he who was speaking said Yahweh, which is also a present participle. Greek translators of the Hebrew Bible put Yahweh as Ὁ ὬΝ.

Before I began to study this subject, I also thought that these letters had always been part of the image of Christ, but in examining the images that have come down to us from the first millennium, and even after, I noticed that the Ὁ ὬΝ is universally absent, as much in the West as in the East. I therefore started searching for the answer to the following questions: when, where and why did Christians add these letters to Christ’s halo?

I began by noticing that during the first millennium, Christ’s halo was sometimes empty and that, more rarely, it was absent. 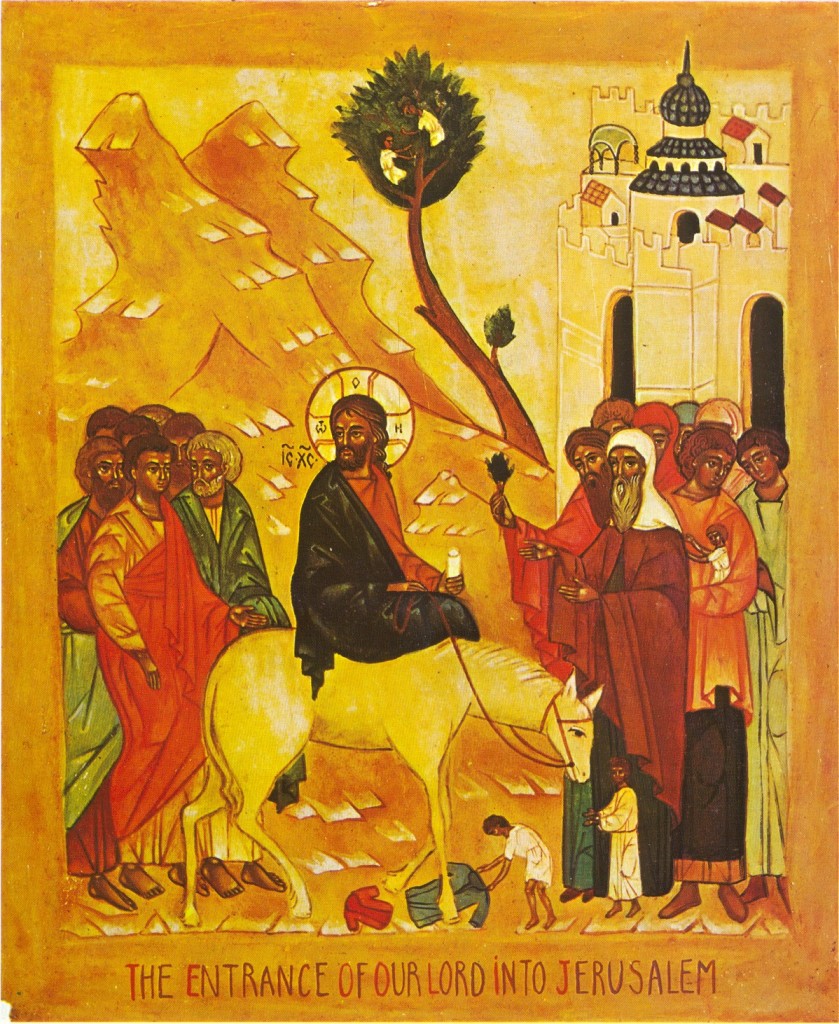 On The Origin of Ὁ ὬΝ in The Halo of Christ

This particular icon was written by the Russian icon painter Simon Ushakov.

The entire history of such icons is quite fascinating.

Aside from the legend that Pilate had made an image of Christ, the fourth-century Eusebius of Caesarea, in his Church History, provides a more substantial reference to a "first" icon of Jesus. He relates that King Abgar of Edessa sent a letter to Jesus at Jerusalem, asking Jesus to come and heal him of an illness. In this version there is no image. Then, in the later account found in the Syriac Doctrine of Addai, a painted image of Jesus is mentioned in the story; and even later, in the account given by Evagrius, the painted image is transformed into an image that miraculously appeared on a towel when Christ pressed the cloth to his wet face.3 Further legends relate that the cloth remained in Edessa until the tenth century, when it was taken to Constantinople. In 1204 it was lost when Constantinople was sacked by Crusaders, but its iconic type had been well fixed in numerous copies.

Elsewhere in his Church History, Eusebius reports seeing what he took to be portraits of Jesus, Peter and Paul, and also mentions a bronze statue at Banias / Paneas, of which he wrote, "They say that this statue is an image of Jesus" (H.E. 7:18); further, he relates that locals thought the image to be a memorial of the healing of the woman with an issue of blood by Jesus (Luke 8:43-48), because it depicted a standing man wearing a double cloak and with arm outstretched, and a woman kneeling before him with arms reaching out as if in supplication. John Francis Wilson4 thinks it possible to have been a pagan bronze statue whose true identity had been forgotten; some have thought it to be Aesculapius, the God of healing, but the description of the standing figure and the woman kneeling in supplication is precisely that found on coins depicting the bearded emperor Hadrian reaching out to a female figure symbolizing a province kneeling before him.

After Christianity was legalized by the emperor Constantine within the Roman Empire in 313, huge numbers of pagans became converts. This created the necessity for the transfer of allegiance and practice from the old gods and heroes to the new religion, and for the gradual adaptation of the old system of image making and veneration to a Christian context, in the process of Christianization. Robin Lane Fox states "By the early fifth century, we know of the ownership of private icons of saints; by c. 480-500, we can be sure that the inside of a saint's shrine would be adorned with images and votive portraits, a practice which had probably begun earlier".

When Constantine converted to Christianity the majority of his subjects were still pagans and the Roman Imperial cult of the divinity of the emperor, expressed through the traditional burning of candles and the offering of incense to the emperor’s image, was tolerated for a period because it would have been politically dangerous to attempt to suppress it. Indeed, in the fifth century the portrait of the reigning emperor was still honoured this way in the courts of justice and municipal buildings of the empire and in 425 the Arian Philostorgius charged the orthodox in Constantinople with idolatry because they still honored the image of the emperor Constantine the Great, the founder of the city, in this way. Dix notes that this was more than a century before we find the first reference to a similar honouring of the image of Christ or his saints, but that it would seem a natural progression for the image of Christ, the King of heaven and earth, to be eventually paid the same cultic veneration as that given to the earthly Roman emperor. - Icons in Christendom

According to the Golden Legend, which is a collection of hagiographies, compiled by Jacobus de Varagine in the thirteenth century the king Abgarus sent an epistle unto Jesus and he answered him writing that he will send him one of his disciples (Jude Thaddeus) to heal him. The same works adds:

And when Abgarus saw that he might not see God presently, after that it is said in an ancient history, as John Damascene witnesseth in his fourth book, he sent a painter unto Jesu Christ for to figure the image of our Lord, to the end that at least that he might see him by his image, whom he might not see in his visage. And when the painter came, because of the great splendour and light that shone in the visage of our Lord Jesu Christ, he could not behold it, ne could not counterfeit it by no figure. And when our Lord saw this thing he took from the painter a linen cloth and set it upon his visage, and emprinted the very phisiognomy of his visage therein, and sent it unto the king Abgarus which so much desired it. And in the same history is contained how this image was figured. It was well-eyed, well-browed, a long visage or cheer, and inclined, which is a sign of maturity or ripe sadness. - History of the legend (Image of Edessa)

The Byzantine Catholic Church celebrates Feast of the Face of God on August 16.

You are right that the letters are ώ Ό Ν (lowercase omega, uppercase omicron, uppercase nu) and it means "He who is", in reference to Rev 4:8b:

ESV: Holy, holy, holy, is the Lord God Almighty, who was and is and is to come!

For the connection between Rev 4:8b and Ex 3:14, here's a quote from an article on Christ Pantokrator which has the same letters in the halo:

Around Christ’s head is a halo, an almost universal symbol of holiness. But Christ’s halo is not the same as the halos shown around other saints, nor even in the angels of this icon. Inside of Christ’s halo is the Cross – the Cross of Salvation – although only three arms are visible: the three arms make up a Holy Trinity. Upon the three arms are the Greek letters ώ Ό Ν (omega, omicron, nu) which literally means “the being” or more precisely “He who is”. This is a reference to Christ’s divinity, as the Old Testament reveals “He who is” to be the name God revealed to Moses (Ex. 3:14 – in the Septuagint text this is ἐγώ εἰμί ὁ ὢν: “I am He Who is”). The Revelation of St. John uses the phrase: “Who is (ὁ ὢν), Who was, and Who is coming” throughout to refer to Jesus Christ. These revelations of Jesus Christ’s nature and the Holy Trinity are preserved in Christ’s Halo.

Not the answer you're looking for? Browse other questions tagged eastern-orthodox iconography russia or ask your own question.

9
What is the earliest record of using icons to worship God in the Catholic or Orthodox traditions?
19
What is the difference between icons and idols in churches that permit icons?
6
What is the difference of icon veneration between various Christian confessions?
13
Meaning behind skull at the base of a cross?
3
What is the name of a film about three brothers saying the Jesus prayer?
6
What is the Biblical support for a distinction between veneration and worship?
7
According to proponents of transubstantiation, in what sense is Jesus present "where two or three are gathered"?
4
According to the Eastern Orthodox, what are the rules for acquiring / owning icons?