Has any Christian Apologist ever published arguments for the existence of Satan, demons and their ongoing influence over human matters?

Christianity does not have a clear and unambiguous definition. Rather, I see Christianity as an umbrella term that includes a variety of multiple branches, with many shared beliefs, but also not exempt of notable points of disagreement. In some cases, the disagreements have been so extreme that they have led to major divisions within the Church. I'm totally aware of this fact and, therefore, I do not seek arguments for individual branches. Instead, I'm interested in the main arguments used to defend the veracity of several core beliefs of Christianity, shared by the majority of Christendom, which are specific enough to distinguish Christianity from other religions.

To the best of my knowledge, the following are core beliefs of Christianity that are accepted as true by the vast majority of Christians:

I'm not sure if there are other core beliefs that I'm missing, or if the beliefs listed above should be reworded to be more accurate (if so, please let me know in the comments). That said, I think that these eight core beliefs are sufficient, in the sense that if they are proven to be true, they together would create a very compelling case for the veracity of Christianity over any other religion.

I quickly searched the literature for examples of what apologists usually argue for and noticed that most apologists tend to focus on beliefs #1 (Monotheism: there is one God, who created the universe) and #8 (The resurrection of Jesus was a historical fact). This makes sense, because the former makes the case for monotheistic theism in general, whereas the latter complements by making the case for Christianity specifically.

That said, point #5 (Satan exists, demons exist, and the world is (and has been) heavily under their influence) is definitely a core belief of Christianity too. Satan is all over the place in the Bible, from Genesis to Revelation. Jesus casted demons out of people left and right during his ministry, according to the four gospels. The fact that the Scriptures teach about the existence of Satan and his minions is overwhelmingly clear and undeniable, to the point that I'm not sure if it is even possible to be a Christian and not believe in the existence of Satan and his army of demons.

Question: Has any Christian Apologist ever published arguments for the existence of Satan, demons and their ongoing influence over human matters?

CS Lewis addresses it in many places, though perhaps most thoroughly in Mere Christianity. An abbreviated discussion of Lewis' thoughts can be found here.

Simply searching "proof of the existence of satan" will get you any number of articles, treatises, blogs, and more on the subject.

Others, as mentioned in the question and its comments, do not bother to prove the existence of satan through logic. Consider the following quote from Jesus the Christ, as written by James E Talmage (of the Latter-Day Saints):

Many modern writers have attempted to explain the phenomenon of demoniacal possession; and beside these there are not a few who deny the possibility of actual domination of the victim by spirit personages. Yet the scriptures are explicit in showing the contrary... In this matter as in others the simplest explanation is the pertinent truth; theory raised on other than scriptural foundation is unstable. Christ unequivocally associated demons with Satan...

The apologist would say this is illogical. Either the Bible is the word of God, or it isn't, and if a preponderance of evidence convinces someone it is, then anything left unaddressed can be accepted on the basis of God being involved in the Bible throughout.

The reader might argue that the apologist needs to prove the entirety, for if the Bible is mostly correct, but got it wrong in regards to satan and devils, then it can't be the word of God as described within its own pages.

To use an analogy, if someone can explain a car's combustion engine sufficient that they convince a reader it works, they need not explain the suspension to prove that the thing a person sees driving down a road is a car and that it has a suspension system. This will not satisfy every reader, and is perhaps a failing that more apologists should address, but as mentioned above, there are some addressing it.

Has any Christian Apologist ever published arguments for the existence of Satan, demons and their ongoing influence over human matters?

Msgr. Leon Cristiani does so in his book Evidence of Satan in the Modern World.

“The Devil’s deepest wile is to persuade us that he does not exist.” Using Baudelaire’s well known phrase as a starting point, Msgr. Leon Cristiani has amassed convincing proof that the Devil does indeed exist and that he continues to manifest his presence in the modern world, no less than in earlier times. Because he documents with scrupulous care the still present phenomena of diabolical infestation, possession and temptation, his book has become one of the best ever written on the subject. No one studying possession and exorcism today can neglect this fascinating and absorbing book. 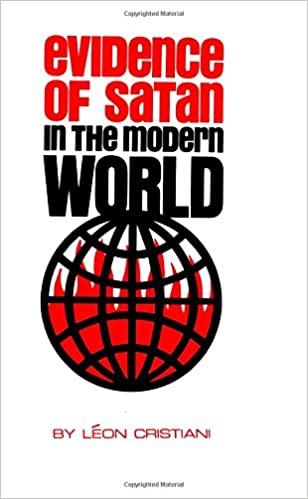 Evidence of Satan in the Modern World

Not the answer you're looking for? Browse other questions tagged satan apologetics demons resource-request .

3
What are apologetic arguments for the existence of demons?

11
Origin of the idea that "demons" and "fallen angels" are the same thing?
3
How do Christians make sense of exorcisms in other religions?
3
What are the arguments against the feeding miracles really happened?
1
What are the strongest apologetic arguments for the existence of miracles and the supernatural gifts of the Spirit during the apostolic age?
0
What is the difference between a missionary and an apologist when it comes to proselytizing for the Christian faith?
3
What are apologetic arguments for the existence of demons?