Who is this cardinal in this picture?

Who is this pope's auxiliary? I see him with the Pope in many pictures. Thanks 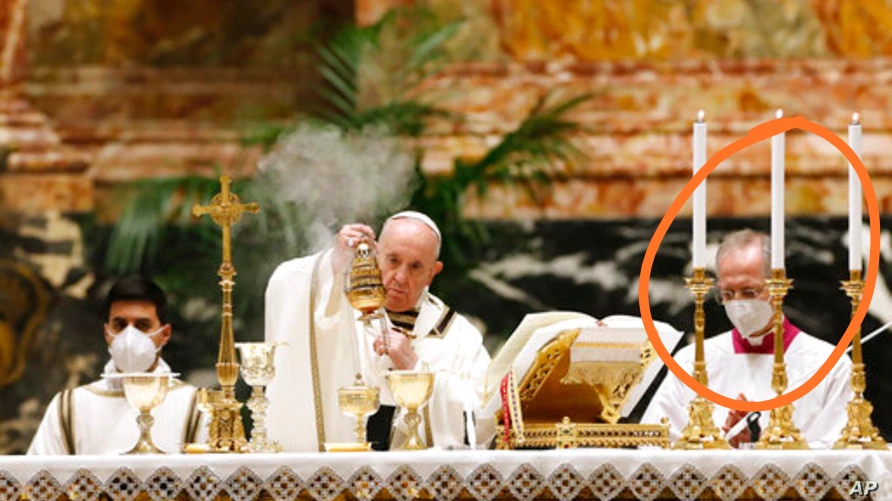 The answer to your question is Mgr. Guido Marini.

Unfortunately, he is not a Cardinal or even a Bishop. 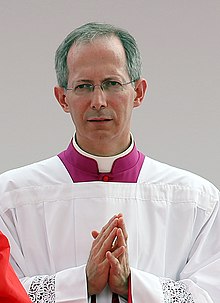 Mgr. Guido Marini is the Papal Master of Ceremonies also known as the Master of Pontifical Liturgical Celebrations. The title was once known as the Priest Assistant in the days of old.

Guido Marini (born 31 January 1965) is an Italian priest of the Catholic Church, who has been the Master of Pontifical Liturgical Ceremonies since 1 October 2007. Pope Francis has extended his appointment to 2022. He previously served as chief liturgist for the Archdiocese of Genoa.

Marini, following his appointment as Master of Pontifical Liturgical Celebrations, restored some traditional elements of papal ceremonial. During his time as Master of Ceremonies the Papal Altar was rearranged. The seven candles and crucifix were placed in a line across the Altar rather than clustered on the sides. This arrangement has become known as the "Benedictine arrangement".

In a January 2010 speech, Marini supported calls in the church for a "reform of the reform" of liturgy. He said: "For some years now, several voices have been heard within church circles talking about the necessity of a new liturgical renewal," adding that a new renewal movement would be "capable of operating a reform of the reform, or rather, move one more step ahead in understanding the authentic spirit of the liturgy and its celebration."

In 2015 Pope Francis made changes to the public ceremony of investiture of the pallium on metropolitan archbishops emphasizing that the investiture is an ecclesial event of the whole diocese, and not merely a juridical or ceremonial event. Marini said that from now on – starting from 29 June this year – the ceremony of investiture of the pallium will take place in the Metropolitan Archbishops' home dioceses and not in the Vatican.

During Marini's time as Master of Ceremonies Pope Benedict ceased to use the papal staff made for Paul VI and began to use an older one made for Pius XI. Due to the weight of that staff, Benedict had his own made which is much lighter, and shares a similar style with the previous one. Pope Francis occasionally makes use of this one also in order to emphasize continuity with his predecessor. He also made decisions about the use of papal vestments at Mass and other pontifical celebrations, dressing Cardinal-Deacons in dalmatics when serving pontifical celebrations.

Not the answer you're looking for? Browse other questions tagged catholicism papacy easter pope-francis or ask your own question.

4
Papal blessings via alternate media?
14
Do Pope Francis' recent comments on atheism represent a change in doctrine?
10
Who is the author referred to in the Pope's 4 April 2014 homily?
23
Has a pope ever been corrected publicly by a non-cleric in the presence of cardinals because of the unclear wording of a papal document?
2
Have cardinals ever been deprived of revenue or rations for taking too long to elect a pope?
3
Who has the authority to change the wording of the Lord's Prayer in the Catholic Church in the United States?
8
What is the fewest number of cardinal electors are needed to validly elect a pope?
5
What is the meaning behind this coin of Pope St. John Paul II?