What is the Biblical basis for accepting Feminist Christian Theology which says we should use female pronouns for God?

Feminist Philosophy of Religion: Feminist philosophy of religion is a recent development within Western philosophy that poses feminist questions about religious texts, traditions, and practices, often with the aim of critiquing, redefining, or reconstructing the entire field in light of gender studies... And because it is feminist, it must promote the elimination of gender inequality and take into account the multiplicity of human bodies, desires, and differences that are mapped onto the site of religion. https://plato.stanford.edu/entries/feminist-religion/

Christian feminism is an aspect of feminist theology which seeks to advance and understand the equality of men and women morally, socially, spiritually, and in leadership from a Christian perspective... These theologians believe that God does not discriminate on the basis of biologically determined characteristics, such as sex and race. Their major issues include the ordination of women, male dominance in Christian marriage, recognition of equal spiritual and moral abilities, reproductive rights, and the search for a feminine or gender-transcendent divine... The term Christian egalitarianism is sometimes preferred by those advocating gender equality and equity among Christians who do not wish to associate themselves with the feminist movement. Women apologists have become more visible in Christian academia. https://en.wikipedia.org/wiki/Feminist_theology#Christianity

What is the Biblical basis for accepting Feminist Theology with regard to the following topic:

Replacing male pronouns for God with gender-neutral terms: Feminist theology often criticizes the use of male pronouns for God; referring to God as “He,” “Him,” or “Father” degrades the status of women. The alternative is to refer to God only using gender-neutral terms such as the Divine or to balance the offending terms with female equivalents such as She, Her, and Mother.

Linked: What is the Biblical basis for rejecting Feminist Christian Theology which says we should use female pronouns for God?

In doing research for this post, I came across a fascinating reference from C.S. Lewis. It appears to be something that he said following his 1948 article on "Priestesses in the Church?"

Evidently Lewis once rhetorically queried the late Anglican Bishop John A. T. Robinson. Robinson, noted thirty-five years ago for (then) avant-garde proposals, had suggested it was high time feminine images for God were introduced to balance out the traditional masculine ones. To this Lewis replied ironically, "I shouldn't believe it strongly, but some sort of case could be made out." Unfortunately, I have not been able to source where the quote came from.

The essence of God is beyond gender. However, his attributes or energy (i.e. illocal manifestations) can come in different modalities - e.g. male or female. In Genesis 1:27 it states that "God created man in his own image, in the image of God he created him; male and female he created them."

One of the descriptions of God in the Hebrew Scriptures is El Shaddai. Some scholars have argued that in the ancient Hebrew it is arguably the plural form of, “SHAD” - which literally means “breast.” Other scholars, such as Michael Brown, have pushed back on the viewpoint arguing that: "I own every major Hebrew lexicon and theological encyclopedia. Every single one of them rejects the idea that El Shaddai means “God of (many) breasts.” Unfortunately, Brown does not give quotes on why they reject the idea.

However, Susan Pigott in her blog post article "El Shaddai and the Gender of God" touches upon the various arguments from the major Hebrew lexicons. The various discussions from other people on her blog post (sourced 8/20/21) gets into the nuances of the linguistic debate in great depth and detail.

While the plural form of "shad" (שד) could refer to a man's breast plate of protection, another viewpoint is that it appears to be used in reference to the nurturing aspect of God. For example, David Biale notes in “The God with Breasts: El Shaddai,” that; “…all of the passages using El Shaddai in Genesis, with one exception, are fertility blessings.”

Perhaps the original meaning of El Shaddai (Que music by Amy Grant) conveyed the attributes of both the strength of a man's chest (breast) along with the nurturing qualities of a woman's breast?

Some scholars have pointed out that the Lord’s prayer begins with “Our Father,” a translation of the word, “abba.” However, the actual Aramaic transliteration is “Abwoon” which is a blending of “abba (father)” and “woon” (womb). In this view, Jesus gives a recognition of both the masculine and feminine attributes of God as a source of creation. Unfortunately, we lack a version of the original sayings of Matthew in Hebrew/Aramiac. So, this view can't be verified.

If the Logos became flesh and dwelled among us as a man, it does not necessarily follow that the essence of the Logos is not beyond gender as the second person of the Trinity. Jesus seemed to describe the feminine nurturing attributes of his Logos nature when he said, “Jerusalem, Jerusalem, you who kill the prophets and stone those sent to you, how often I have longed to gather your children together, as a hen gathers her chicks under her wings, and you were not willing." Matthew 23:37

In the early church there is a record of a charismatic prophetess, in the Montanist branch of the church, who experienced the Sophia energy of the Logos coming as a women to share how a revival (i.e. a spiritual Jerusalem) would come down to her area of Phrygia. Epiphanius writes about this third century female prophetess, Quintilla, in the following manner:

…The Quintillianists or Priscillianists say that either Quintilla or Priscilla (I am not sure which one, but one of them), as I mentioned before, slept in Pepuza and Christ came to her and he slept next to her and it happened this way according to the misled woman: “Christ came to me dressed in a white robe,” she said, “in the shape of a woman, instilled into me wisdom, and shared with me how that this place is holy, and that Jerusalem will come down from heaven here.” And, because of this, even down to this day, they say, that certain women and men also are initiated there on the site, so that those people can wait for Christ and see him [themselves]. They are women in this group whom they refer to as prophetesses. (Panarion 49.1)

As it was pointed out, the word for Spirit in Hebrew is in the feminine. Also, in the Jewish tradition the Shekhina has been depicted in a feminine manner. See Leonard Nimoy's book with lots of interesting human representations of God here.

Live long and prosper with God's grace, however you view this issue. Its the(o)logical thinking grace to live by. 🖖

What is the Biblical basis for accepting Feminist Christian Theology which says we should use female pronouns for God?

“Jesus Christ appears as the Spouse of the community that celebrates the Eucharist through the figure of a man who presides as a sign of the one Priest. This dialogue between the Spouse and his Bride, which arises in adoration and sanctifies the community, should not trap us in partial conceptions of power in the Church. The Lord chose to reveal his power and his love through two human faces: the face of his divine Son made man and the face of a creature, a woman, Mary. Women make their contribution to the Church in a way that is properly theirs, by making present the tender strength of Mary, the Mother. As a result, we do not limit ourselves to a functional approach, but enter instead into the inmost structure of the Church. In this way, we will fundamentally realize why, without women, the Church breaks down” https://wherepeteris.com/which-pope-said-this-136/

The Church Fathers also teaches God the Wisdom or the Holy Spirit as feminine;

The grammatical gender of the word for "spirit" is feminine in Hebrew (רוּחַ, rūaḥ),1 neuter in Greek (πνεῦμα, pneûma) and masculine in Latin (spiritus). The neuter Greek πνεῦμα is used in the Septuagint to translate the Hebrew רוּחַ. The pronouns used to address the Holy Spirit, however, are masculine.

The Holy Spirit was furthermore equated with the (grammatically feminine) Wisdom of God by two early Church fathers, Theophilus of Antioch (d. 180) and by Irenaeus (d. 202/3). https://en.wikipedia.org/wiki/Gender_of_the_Holy_Spirit

Divine Wisdom shows himself to be the mother and source of all good and he exhorts all men to give up everything and desire him alone.

Eternal Wisdom began to manifest himself "outside the bosom of God the Father" when, after a whole eternity, he made light, heaven and earth. St John tells us that everything was made through the Word, that is eternal Wisdom: "All things were made by him" (Jn. 1:3; cf. Heb. 1:2; Col. 1:16-17).

Solomon says that eternal Wisdom is the mother and maker of all things. Notice that Solomon does not call him simply the maker of the universe but also its mother because the maker does not love and care for the work of his hands like a mother does for her child (Wisd. 7: 12,21).

But to understand, this mystery, one needs to ponder God's Will in eternity and St.Maximillian Kolbe and Ven. Ab. Fulton Sheen and the wisdom of the Three Great Marian Saints like St. Maximilian Kolbe, St. Louis de Montfort and St. Liguori will help us see Pope Francis wisdom behind his teachings in Amazonia Querida, saying God reveals two human faces, Son of Man in Jesus Christ and the Woman in Divine Motherhood of the Blessed Virgin Mary.

God the Father sees the image of His Begotten Son the Second Person of the Holy Trinity as the "Son of Man" existing in the "bosom of the Father" in eternity. This image was incarnated in the womb of a Woman to become flesh as Jesus Christ the Divine Mercy made flesh was incarnated and dwelt among us.

The Blessed Virgin Mary offered Her body & blood and gave face to the Logos the Second Person of the Holy Trinity.

The Blessed Virgin Mary offered Her Sorrowful & Immaculate Heart and gave face to the Holy Spirit, the Third Person of the Holy Trinity. 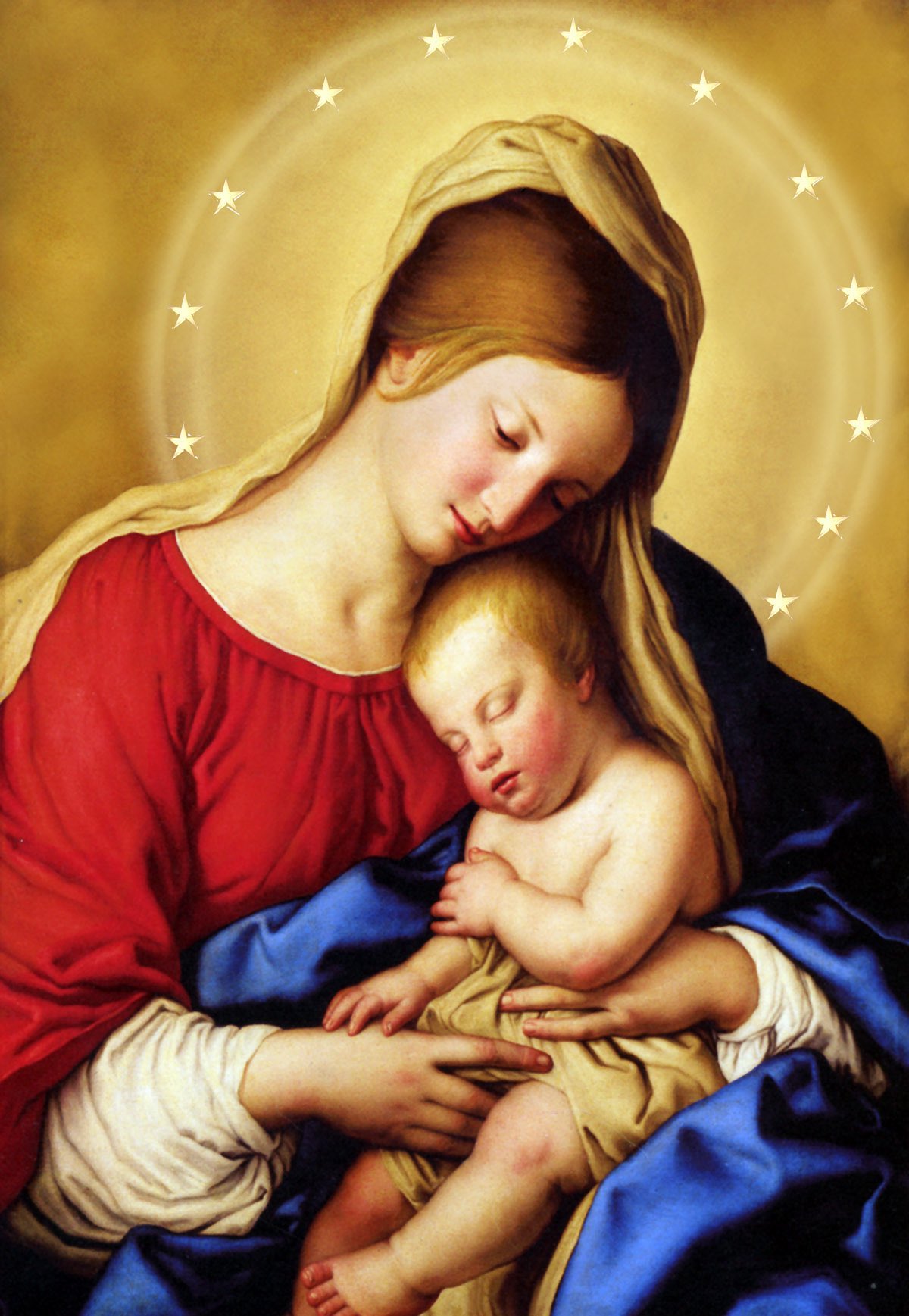 That's why scholars had seen two creation, having Man & Woman created and the image and likeness of God, and another set of creation creating mankind both "male and female".

More biblical passages on a Feminine attribution to God in this article written by Fr. James Martin who controversially uploaded a pronoun of God using "Her". https://www.americamagazine.org/faith/2021/03/08/is-god-a-man-or-a-woman-catholic-240173

3
What is the Biblical basis for rejecting Feminist Christian Theology which says we should use female pronouns for God?