The internationally represented assembly was made up of 84 members, of which 61 were Dutch pastors, Church elders and professors, and 23 English, Scots, Germans, and Swiss. In addition 18 official representatives of the States General were present, the political commissioners with their secretary, Daniel Heinsius. Bogerman, on account of his hard-line Contra-Remonstrant stance, was elected to the position of Moderator of the Synod, and Hommius to the position of first secretary. The Synod decided to summon 13 Remonstrants from each of the provinces, with the exception of Utrecht, whose Provincial synod had sent three Remonstrants as official members to the Synod, who were henceforth given the choice either to give up defending the Arminian cause or the change to the side of those summoned. These latter were finally replaced by three Contra-Remonstrants. So far as the manner of handling the dispute between Remonstrants and Contra-Remonstrants was concerned, the Synod was effectively a tribunal whose aim was clear from the outset: the Remonstrants were to be convicted and their doctrines anathematised as heretical. This was already reflected in the seating order: the Remonstrants were to sit at a table which was positioned in the middle of the assembly room, whilst the Dutch and foreign delegates in charge of the prosecution under the direction of the Contra-Remonstrant Bogerman were to sit grouped around them. The Remonstrants, who were not even allowed to appoint their own representatives to the Synod, found themselves from the very beginning in the role of the accused after the Contra-Remonstrants had declared themselves as their judges[.]

You can see this intimidating seating arrangement in the Copperplate etching below. Someone, presumably Episcopius, stands at the head of the table, with what appears to be 6 delegates to his left, and 6 to his right. 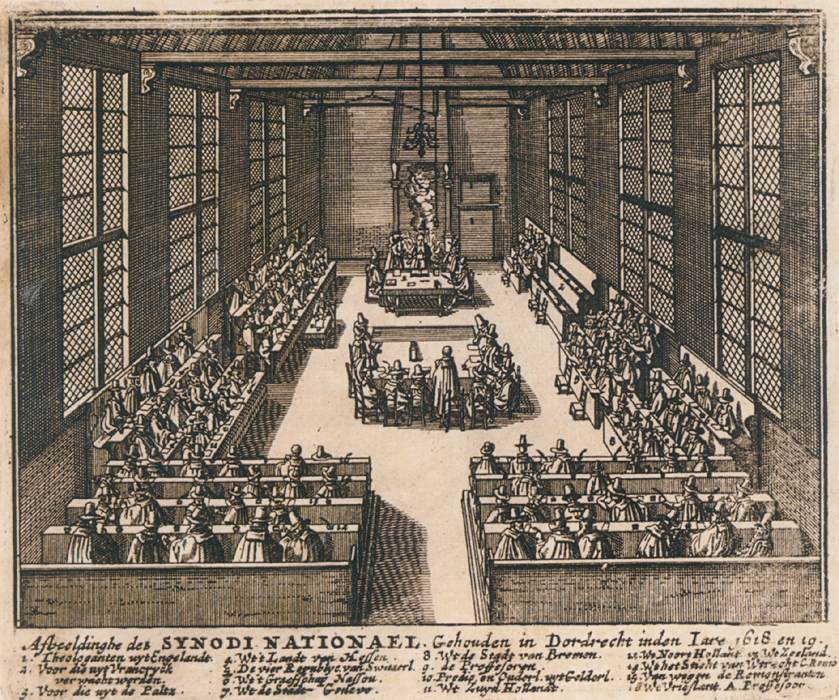 There appear to be four main reasons to support the idea that the representation at the Synod was uneven and unfair again the Remonstrants:

Wikipedia states 14 Remonstrants were present at the Synod, however it cites Mulsow & Rohls who give 13. So Wikipedia appears to be mistaken. I could not find any reliable sources independent from Wikipedia which state 14 rather than 13. In fact, that same Wikipedia article, citing Jacobus Regenboog's Historie der Remonstranten, 1774, gives the summoned individual's names, counting 13 in total.

The copperplate above appears to have 13 Remonstrants, although it's difficult to tell for sure at the image resolution.

This 17th Century Coin depicting the Synod appears to have 12 people at the centre, with a 13th walking away, but it's hard to make out. However it's some more evidence against the 14 number.

Not the answer you're looking for? Browse other questions tagged arminianism or ask your own question.

4
Did Arminius believe Adam's actual guilt was imputed against all humanity?
10
Are Calvinism and Arminianism compatible?
6
How do Arminians understand the doctrine of Unlimited Atonement in a way that does not make God unjust?
7
How do Arminians reconcile free will with God's omnipotence logically?
10
What was the point of the third article of Remonstrance?
5
How do people become the sheep that Jesus speaks of in John 10?
3
Do Southern Baptist traditionalists agree with the Arminian view of prevenient grace?