What is the biblical basis for a Flat Earth?

From time to time I've come across Christians who claim that the Bible teaches a flat earth (e.g. see this book and the reviews). There are also Christians who have reacted against these (e.g. 1, 2).

In pursuit of impartiality and to give Flat Earth Christians the benefit of the doubt, I ask: What passages of the Bible are commonly cited to make a case for the belief in a Flat Earth?

What is the biblical basis for a Flat Earth?

Wikipedia makes the claim that St. John Chrysostom and Archbishop of Constantinople, explicitly espoused the idea, based on scripture, that the Earth floats miraculously on the water beneath the firmament.

Diodorus of Tarsus, a leading figure in the School of Antioch and mentor of John Chrysostom, may have argued for a flat Earth; however, Diodorus' opinion on the matter is known only from a later criticism. Chrysostom, one of the four Great Church Fathers of the Eastern Church and Archbishop of Constantinople, explicitly espoused the idea, based on scripture, that the Earth floats miraculously on the water beneath the firmament. Athanasius the Great, Church Father and Patriarch of Alexandria, expressed a similar view in Against the Heathen. - Flat Earth

Nowhere in Scripture does it state that the earth is flat. Interpretation at times, by various individuals may tend to imply a flat earth.

The biblical texts most often cited in the claim that the Bible teaches a flat Earth are Job 38:5, 12-14, Isaiah 11:12, 40:22, and Revelation 7:1, 20:7. Of these passages, the most cited is Isaiah 40:22. The relevant part of Isaiah 40:22, referring to God, states, “He sits enthroned above the circle of the earth, and its people are like grasshoppers.” Whether the “circle of the earth” refers to a human on Earth or God looking down on Earth from above, in both cases the phrase would be consistent with a spherically shaped Earth. It is worth noting that only a sphere always looks like a circle when seen from above.

The Isaiah 11:12 and Revelation 7:1, 20:7 verses all refer to the “four corners of the earth.” However, even today, astronomers, physicists, and educated people around the world recognize and use the “four corners of the earth” as phenomenalogical language referring to the most distant parts of Earth from the standpoint of an observer at a specific location on Earth. It is clear from an examination of the context for all three of these passages that the most distant parts of Earth is the intent implied by the use of the idiom, the four corners of the earth. As the Theological Wordbook of the Old Testament points out, the Hebrew word for “corners” used in Isaiah 11:12, kanap, in most of its appearances in the Old Testament is used figuratively.

The passage in Job 38:5 referring to Earth states, “Who fixed its dimensions? Certainly you know! Who stretched a measuring line across it?” The inference made by those claiming that the Bible is a flat-earth book is that the “measuring line” is a straight line which would be suitable for measuring a flat disk but not a sphere. This is an overinterpretation. Lines can be straight or curved. Also, it is customary to measure the diameter of a sphere with a straightedge ruler.

Job 38:12-14 refers to the dawn seizing “the edges [or ends] of the earth” and Earth taking “shape like clay under a seal.” What is interesting here is that for a spherical Earth the arrival of dawn first shows up at the most distant horizon, end, or edge of the point of view of a human at a fixed point upon Earth’s surface. The taking shape like clay under a seal would apply to either a disk or a sphere and may be saying more about Earth’s rotation or its manufacture than its actual shape.

The irony of choosing Job 38:5, 12-14, Isaiah 11:12, 40:22, and Revelation 7:1, 20:7 to sustain the claim that the Bible is a flat-earth book is that these biblical texts better fit a spherical Earth than they do a flat Earth. While it would be an overinterpretation to conclude that these texts explicitly teach that Earth is a sphere, nowhere in the Bible do we find any text saying that Earth is flat. The Bible remains the only holy book for which we can say that it contains no provable errors or contradictions. - Is the Bible a Flat-Earth Book?

So no versus in Scripture states that: “The earth is flat.” Flat earth clearly might be implied in Scripture: ”The devil took Jesus to a very high mountain and showed Him all the kingdoms of the world.” (Matt 4:8)

Some might have thought that since the Bible says (50 times) that the Earth has ends; it must be flat:

But you, Israel, My servant, Jacob whom I have chosen, descendant of Abraham My friend, you whom I have taken from the ends of the earth, and called from its remotest parts [Ur]. Is 41:8-9

Abraham from Ur (S. Mesopotamia) Gen 11:31 Ur at shoreline of the circumferential sea Jesus: The Queen of the South [Sheba] will rise at the judgment with this generation & condemn it; for she came from the ends of the earth to listen to Solomon’s wisdom. Matt 12:42 Sheba in the SW corner of Arabia - The Bible and Ancient Science (University of Alberta) 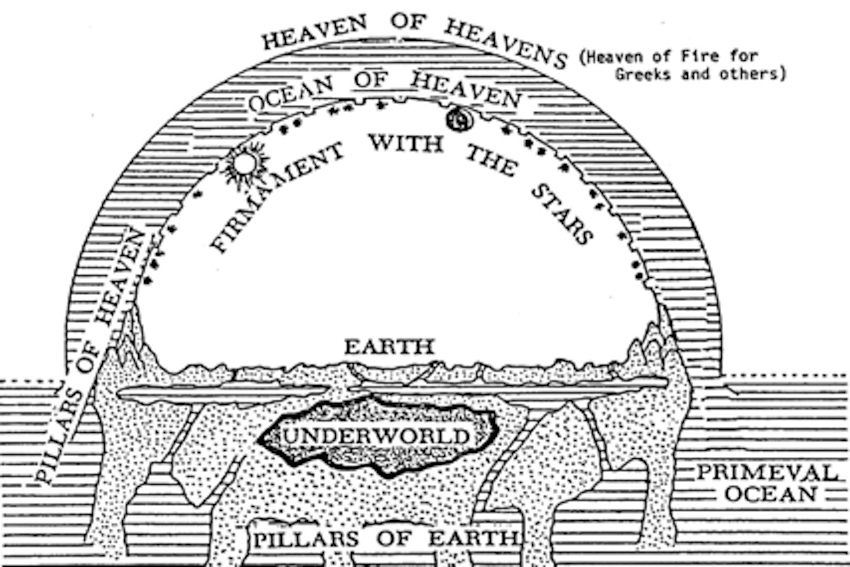 One of those issue concerns the second day of creation (Genesis 1:6-8), where God made the “expanse” or the “firmament.” The Hebrew word for this is raqia. Biblical scholars understand the raqia to be a solid dome-like structure. It separates the water into two parts, so that there is water above the raqia and water below it (v. 7). The waters above are kept at bay so the world can become inhabitable. On the third day (vv. 9-10), the water below the raqia is “gathered to one place” to form the sea and allow the dry land to appear.

Ancient Israelites “saw” this barrier when they looked up. There were no telescopes, space exploration, or means of testing the atmosphere. They relied on what their senses told them. Even today, looking up at a clear sky in open country, the sky seems to “begin” at the horizons and reaches up far above. Ancient Israelites and others in that part of the world assumed the world was flat, and so it looked like the earth is covered by a dome, and the “blue sky” is the “water above” held back by the raqia. The translation “firmament” (i.e., firm) gets across this idea of a solid structure.

Biblical scholars agree on this understanding of raqia. For some Christians, however, this is troubling. How can the Bible, which is the inspired, revealed word of God, contain such an inaccurate piece of ancient nonsense? Hence, some invest a lot of time and energy to show that the raqia is not solid but more like the atmosphere. Often, the word “expanse” is the preferred translation because it does not necessarily imply something solid.

Arguing for a non-solid raqia in Genesis is extremely problematic, for two reasons. First, the biblical and extrabiblical data indicate that raqia means a solid structure of some sort. The second problem is a much larger theological issue, but is actually more foundational. Regardless of what one thinks of the raqia, why would anyone assume that the ancient cosmology in Genesis could be expected to be in harmony with modern science in the first place? - The Firmament of Genesis 1 is Solid but That’s Not the Point

Here follows a few sites that some may wish to peruse at their leisure:

Not the answer you're looking for? Browse other questions tagged biblical-basis creation earth .