Who were the recepients of Christian monumental sculptures in the early middle ages (10th and 11th century)?

I am in the process of writing a paper about the bronze column commissioned by Bernwardus Hildesheimiensis, the bishop founder of Benedictine Monastery of St. Michael in Hildesheim, completed approximately between 1015-1022.

The question I am trying to answer is who could actually see this monument. There are various theories about why such an expensive and technologically advanced bronze sculpture was created and erected in a "frontier" place like Hildesheim (barely a town, more a muddy farmer village) at the turn of the 10th to the 11th century. One of the theories is that it was supposed to impress the pagan Slavic populations that were being Christianized in this era. The intention was to show Christian superiority in both faith and as an advanced civilisation. But as it was positioned inside an abbey church, there was certainly no pagan who would have seen it.

My question is thus: Who could see this column apart from the clerics? How could it help spread the Gospel and help the conversion to Christianity of the Slavic people?

Who could see the Bernward Column in the Benedictine Monastery of St. Micheal in Hildesheim, Germany apart from the clerics? How could it help spread the Gospel and help the conversion to Christianity of the Slavic people?

First of all what is this Bernward Column?

The Bernward Column also known as the Christ Column is a Romanesque bronze column, made c. 1000 for St. Michael's Church in Hildesheim, Germany, and regarded as a masterpiece of Ottonian art. It was commissioned by Bernward, thirteenth bishop of Hildesheim. It depicts images from the life of Jesus, arranged in a helix similar to Trajan's Column: it was originally topped with a cross or crucifix. - Bernward Column

Where was it situatated within the Abbey Church?

Bishop Bernward ordered the column about the year 1000. Therefore its known as Bernward’s Column. It was built for the Benedictine monastery St. Michael’s founded by Bernward and was located behind the rood altar in the eastern part of the nave. - Christ’s Column (Bernward’s Column)

Here is the column in question:

Bernward’s Column is a masterpiece of the highest competence – masterful manufactured, that even with most modern technology a reproduction was difficult. The helical structure is upheld inside by a steel pole and screw connection and both ends are under stress – similar to the spinal column which supports the torso of the human body. Outwards a story made of pictures is to be found. 28 scenes taken from the public life of Jesus helical lead upwards, to begin with the launching ceremony of Jesus, progressing with his miracle actions right up to his triumphal procession into the city of Jerusalem. The todays capital is a free reproduction from the 19th century. The top of the column in the first place was a rood. It was aiming point of the pictures, to which the four incarnations of the paradise-rivers look up from their basis. In the rough-and-tumple during the reformation the rood was melted down in the middle of the 16th century to cast cannons. Not alone this encroachment endangered the masterpiece: about 100 years later also the capital was melted down to pay the bell of the in the meanwhile being evangelic church of St. Michael’s. About 1730 it is considered to convert the whole column into cash. A campaign for donations prevents this step. 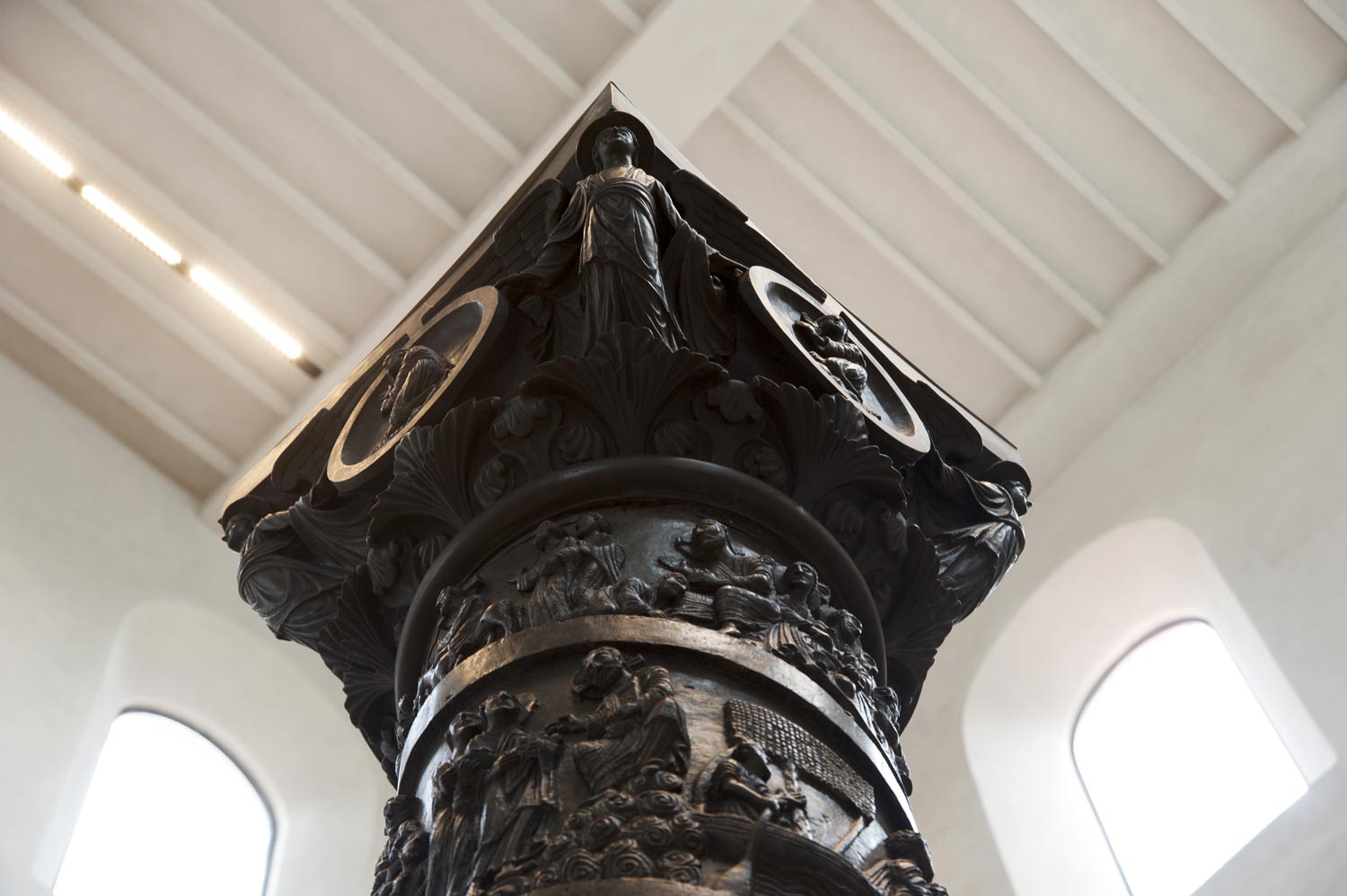 The column in itself is a form of a Poor Man’s Bible (Biblia Pauperum).

The term Poor Man's Bible has come into use in modern times to describe works of art within churches and cathedrals which either individually or collectively have been created to illustrate the teachings of the Bible for a largely illiterate population. These artworks may take the form of carvings, paintings, mosaics or stained-glass windows. In some churches a single artwork, such as a stained-glass window has the role of Poor Man's Bible while in others, the entire church is decorated with a complex biblical narrative that unites in a single scheme.

The column being situated in the east transept behind the rood altar would mean that generally speaking the only ones to see the column would be the religious who lived within the Monastery.

The rood altar is such named because the monks processed in and out of a side door when entering and leaving the church and thus did not have to mingle with visitors or guests of the abbey. In other words, the Bernward Column was situated within the monastic cloister.

One has to keep in mind that at this time in history, monastic communities were very large and the vast majority were not clerics but lay brothers or working monks who were often illiterate. For these monks the column was truly a Poor Man’s Bible.

Occasionally, male visitors and guests would be permitted to tour the abbey church with a monk as a guide. These guests could be either members of the faithful or even Pagans.

On rare occasions, such as at an ordinations or professions of one of the monks, the families of these monks and even their extended families and friends would be seated there to witness the ordination or profession. This would include women, mother, sister and so on of the ordinands and/or those who are making monastic profession.

Not the answer you're looking for? Browse other questions tagged history art architecture .

7
Who in the fourth century had milk instead of wine at communion?
2
Covering of the hair for women, and beards in 1st Century Palestine
2
When and why were stained glass windows first incorporated into the design of a Christian place of worship?
4
Could a lowborn during the middle ages read the bible?
7
Who were the "scribes" whom Jesus often disputes against in the canonical gospels?
8
Did some Christian sects ever hold the opinion that ritual slaughter was obligatory, before the 10th century?
4
The Middle Ages as a Model for the Orderly Society?