According to Catholic Church, did King Solomon find grace with God after his death?

We read at 1 Kings 11:1-13 how King Solomon fell into disgrace and was punished by the Lord :

King Solomon loved many foreign women along with the daughter of Pharaoh.....and his wives turned away his heart. For when Solomon was old, his wives turned away his heart after other gods; and his heart was not true to the Lord his God, as was the heart of his father David. .... So Solomon did what was evil in the sight of the Lord, and did not completely follow the Lord, as his father David had done. ...

Then the Lord was angry with Solomon, because his heart had turned away from the Lord, the God of Israel, who had appeared to him twice, and had commanded him concerning this matter, that he should not follow other gods; but he did not observe what the Lord commanded. Therefore the Lord said to Solomon, “Since this has been your mind and you have not kept my covenant and my statutes that I have commanded you, I will surely tear the kingdom from you and give it to your servant. Yet for the sake of your father David I will not do it in your lifetime; I will tear it out of the hand of your son. I will not, however, tear away the entire kingdom; I will give one tribe to your son, for the sake of my servant David and for the sake of Jerusalem, which I have chosen.

We see God giving an earthly punishment to Solomon for his infidelity. Verses 41-43 which narrate his death do not say whether he died repentant, or not. My question therefore is: According to Catholic Church, did King Solomon find grace with God after his death?

According to Catholic Church, did King Solomon find grace with God after his death?

Most Christians, whether Catholics and other denominations would think it more than a little strange for God to allow the writings of a damned person to become inspired Sacred Scripture (Proverbs, Eccles., Song of Songs).

I am glad you never limited this question to the Latin Rite because in the Byzantine Catholic Church, he is recognized as a saint who’s feast day is celebrated on December 11. In the Eastern Orthodox Church, Solomon is commemorated as a saint, with the title of "Righteous Prophet and King". His feast day is celebrated on the Sunday of the Holy Forefathers (two Sundays before the Great Feast of the Nativity of the Lord).

The biblical King Solomon was known for his wisdom, his wealth and his writings. Solomon was the son of King David and Bathsheba. Solomon was not the oldest son of David, but David promised Bathsheba that Solomon would be the next king. When David’s elder son Adonijah declared himself king, David ordered his servants to bring Solomon to the Gihon spring where the priest anointed him while David was still alive. Solomon inherited a considerable empire from his father.

Although he was a ruler at a young age, he soon became known for his wisdom. The first and most famous incident of his cleverness as a judge was when two women came to his court with a baby whom both women claimed as their own. Solomon threatened to split the baby in half. One woman was prepared to accept the decision, but the other begged the King to give the live baby to the other woman. Solomen then knew the second woman was the mother.

People from surrounding nations also came to hear Solomon’s wisdom. He composed 3,000 proverbs and 1,005 songs. He wrote the Song of Songs, the Book of Proverbs and Ecclesiastes.

Once Solomon’s empire was tranquil, he began to build the Holy Temple. He received wood from King Hiram of Tyre and imposed a compulsory labor service on both the Israelites and the foreign nations that were under his control. Solomon was also renowned for his other building projects in which he used slave labor from the Hittites, Amorites, Perizzites, Hivites and Jebusites. He spent 13 years building his own palace, and also built a city wall, a citadel called the Millo, a palace for the daughter of Pharaoh (who was one of his wives) and facilities for foreign traders. He erected cities for chariots and horsemen and created storage cities. He extended Jerusalem to the north and fortified cities near the mountains of Judah and Jerusalem.

Solomon’s downfall came in his old age. He had taken many foreign wives, whom he allowed to worship other gods. He even built shrines for the sacrifices of his foreign wives. Within Solomon’s kingdom, he placed heavy taxation on the people, who became bitter. He also had the people work as soldiers, chief officers and commanders of his chariots and cavalry. He granted special privileges to the tribes of Judah and this alienated the northern tribes. The prophet Ahijah of Shiloh prophesied that Jeroboam son of Nebat would become king over ten of the 12 tribes, instead of one of Solomon’s sons.

Solomon died in Jerusalem after 40 years as ruler of Israel. He was buried in the City of David. His son, Rehoboam succeeded him as king. Under Rehobaum’s rule, Solomon’s empire was lost and his kingdom was divided into two parts.

In the West, I can not find Solomon being honoured as such. But the fact that Rome allows the Eastern Rite Catholics to honour him as such speaks volumes.

When a small portion of the Ethiopian Orthodox faithful came into union with the Catholic Church, certain of their feast had to be suppressed.

For example: The Commemoration of the Twenty-Four Priests (The Twenty-Fourth Day of the Blessed Month of Hatour: 24 Hatur).

The Catholic Encyclopedia speaks highly of Solomon, although falls short of naming him a saint.

The fact that Solomon's reign was passed in tranquillity, except for the attempts of Edom and Damascus to regain their independence, testifies to the care he displayed for the defence of the realm. That he showed no ambition to undertake foreign conquests redounds to his credit; after the exhausting wars of David the nation needed repose. And if he spent his people's wealth lavishly, his commercial policy may have helped to produce that wealth, and perhaps even given to the Jewish people that impulse towards trade which has been for centuries so marked a trait in their character. Nor can the indirect effects of the commerce he fostered be overlooked, inasmuch as it brought the people into closer contact with the outside world and so enlarged their intellectual horizon. And in two other respects he profoundly influenced his nation's after-history, and thereby mankind in general. In the first place, whatever the burdens which the construction of the temple entailed upon the generation that saw it erected, it eventually became the chief glory of the Jewish race. To it, its ritual, and its associations, was largely due the stronger hold which, after the disruption, the religion of Jehovah had upon Judah as contrasted with Northern Israel; and when Judah ceased to be a nation, the reconstructed temple became in a still higher degree the guardian of the Hebrew faith and hope. And secondly, the Book of Proverbs, though parts are expressly ascribed to other authors than Solomon, and even those sections which are attributed to him may be complex of origin, is nevertheless the product of Solomon's spirit and example, and much that it contains may actually have proceeded from him. And as Proverbs served as a model for many works of a similar character in later times, some of which, as has been said, were popularly ascribed to him (Ecclesiastes, Wisdom), the debt which the world of literature indirectly owes to the Hebrew king is considerable. The works named do not exhaust the list of productions with which Solomon's name is connected. The Song of Songs is attributed to him; two of the Canonical psalms are entitled his; and a book of Psalms of quite late date also goes by his name.

The wisdom of Solomon is universally honoured. Just recall the story involving the two women and the one baby who he ordered to be cut in two. In fact, during the coarse of the liturgical year, this very biblical story is read at Mass in both the Ordinary Form of the Mass and the Extraordinary Form of the Mass.

The wisdom of Solomon will always be praised, not only by Catholics, but by the Orthodox Churches and Jews alike.

The Judgement of Solomon is a story from the Hebrew Bible in which King Solomon of Israel ruled between two women both claiming to be the mother of a child. Solomon revealed their true feelings and relationship to the child by suggesting the baby be cut in two, each woman to receive half. With this strategy, he was able to discern the non-mother as the woman who entirely approved of this proposal, while the actual mother begged that the sword might be sheathed and the child committed to the care of her rival. Some consider this approach to justice an archetypal example of an impartial judge displaying wisdom in making a ruling.

1 Kings 3:16–28 recounts that two mothers living in the same house, each the mother of an infant son, came to Solomon. One of the babies had been smothered, and each claimed the remaining boy as her own. Calling for a sword, Solomon declared his judgment: the baby would be cut in two, each woman to receive half. One mother did not contest the ruling, declaring that if she could not have the baby then neither of them could, but the other begged Solomon, "Give the baby to her, just don't kill him!"

The king declared the second woman the true mother, as a mother would even give up her baby if that was necessary to save its life. This judgment became known throughout all of Israel and was considered an example of profound wisdom. 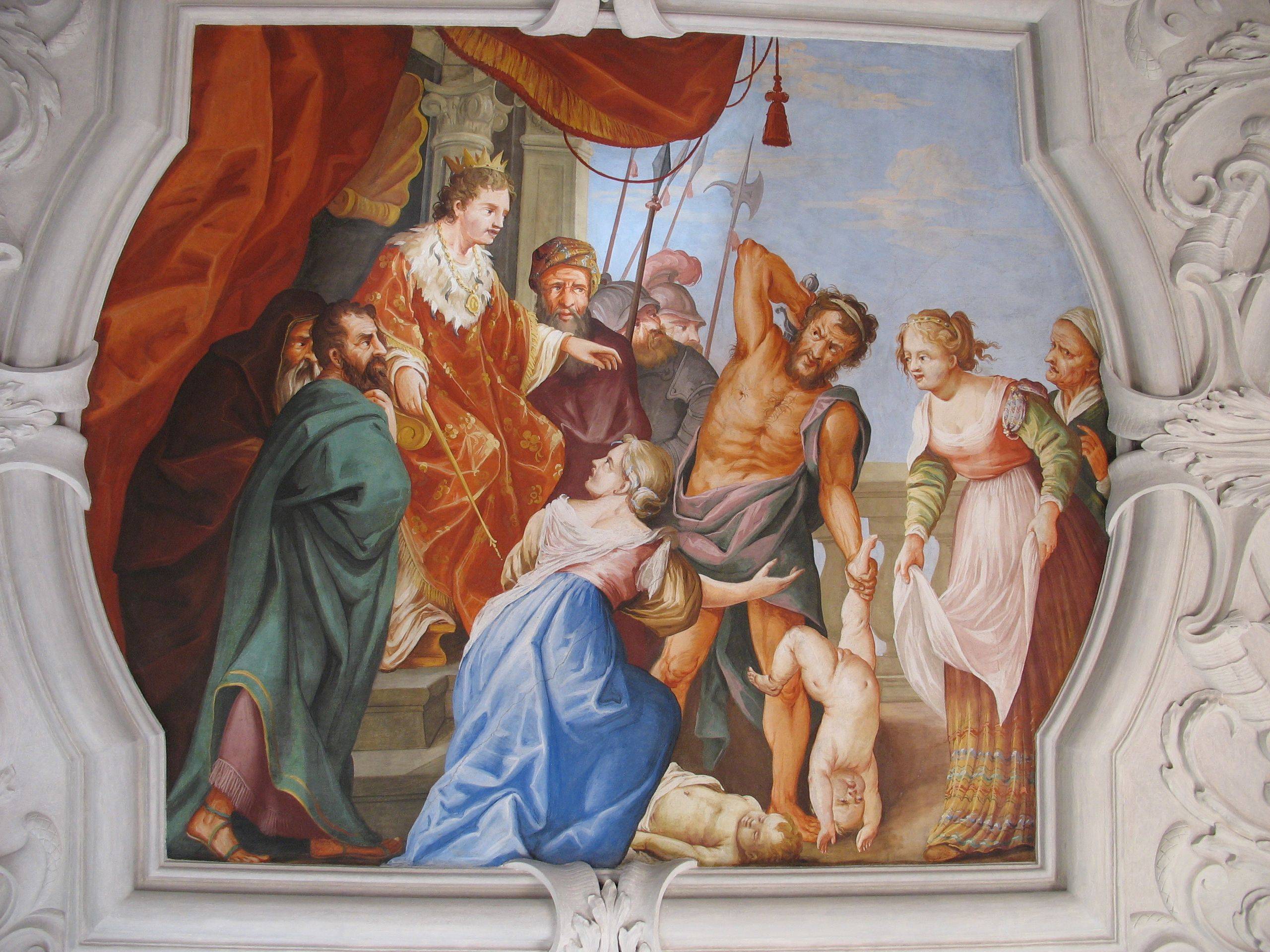 22
Why was neither David nor Solomon stoned to death?
7
Was Solomon interested in studying the Scriptures?
4
Does the Bible indicate whether Solomon is in heaven?
7
Why was Solomon chosen as King instead of one of his brothers?
2
How was Solomon considered one of the wisest?
4
According to the Catholic Church, why does God hurt others to punish David in 2 Samuel:24?
1
Did Solomon himself actually offer sacrifices to other gods?