Does the Catholic Church have a standard instruction on placing crosses on the altar?

Many oriental rites of Catholic Church have the plain cross signifying the Risen Lord, on their altar, whereas others use the crucifix signifying the Redemption. Of course, these days one sees churches of even oriental rites using the crucifix. My question therefore is: Does the Catholic Church have a standard instruction on placing of crucifix or plain cross on the altar of its churches across the world?

Does the Catholic Church have a standard instruction on placing crosses on the altar?

Altar-Crucifix. — The crucifix is the principal ornament of the altar. It is placed on the altar to recall to the mind of the celebrant, and the people, that the Victim offered on the altar is the same as was offered on the Cross1. For this reason the crucifix must be placed on the altar as often as Mass is celebrated (Constit., Accepimus of Benedict XIV, 16 July, 1746). The rubric of the Roman Missal (xx) prescribes that it be placed at the middle of the altar between the candlesticks, and that it be large enough to be conveniently seen by both the celebrant and the people (Cong. Sac. Rit., 17 September, 1822). If for any reason this crucifix is removed, another may take its place in a lower position; but in such cases it must always be visible to all who assist at Mass (ibid.). We remarked above that a crucifix must be placed on the altar during Mass. To this rule there are two exceptions:

In both these cases the regular crucifix may be placed on the altar; in the latter the local custom is to be followed (Cong. Sac. Rit., 2 September, 1741), and if the crucifix is kept on the altar it is not incensed (29 November, 1738). From the, first Vespers of Passion Sunday to the unveiling of the cross on Good Friday, even if a solemn feast occur during this interval, the altar-crucifix is covered with a violet veil (Cong. Sac. Rit., 16 November, 1649), except during High Mass on the altar at which Mass is celebrated on Holy Thursday when the veil is of white material (Cong. Sac. Rit., 20 December, 1783), and on Good Friday, at the altar at which the function takes place, when the veil may be of black material. This is the custom in Rome (Martinucci, Van der Stappen, and others). From the beginning of the adoration of the Cross, on Good Friday, to the hour of None, on Holy Saturday inclusively, all, even the bishop, the canons and the celebrant, make a simple genuflection to the cross (Cong. Sac. Rit., 9 May, 1857; 12 September, 1857). At all other times during the year a simple genuflexion is made to the cross, even when the Blessed Sacrament is not kept in the tabernacle, during any function, by all except the bishop, the canons of the cathedral, and the celebrant (Cong. Sac. Rit., 30 August, 1892). The altar-crucifix need not be blessed; but it may be blessed by any priest, by the formula "pro imaginibus" (Rituale Rom., tit. viii, cap. xxv). It may be well to note that if, according to the Renaissance style of architecture, the throne is a permanent structure above the tabernacle, the altar-crucifix may never be placed under the canopy under which the Blessed Sacrament is publicly exposed, or on the corporal which is used at such exposition (Cong. Sac. Rit., 2 June, 1883). It is probable that the custom of placing a crucifix on the altar did not commence long before the sixth century. Benedict XIV (De Sacrificio Missae, P. I, 19) holds that this custom comes down from the time of the Apostles. However, the earliest documentary evidence of placing a cross on the altar is canon III of the Council of Tours, held in 567: "Ut corpus Domini in Altari, non in armario, sed sub crucis titulo componatur". Mariano Armellini (Lezioni di Archeologia Sacra) tells us that the early Christians were not accustomed to publicly expose the cross for fear of scandalizing the weak, and subjecting it to the insults of the pagans, but in its stead used symbols, e.g. an anchor, a trident, etc. A simple cross, without the figure of Christ, was fixed on the top of the ciboria which covered the altars.

During World War II, Catholic Chaplains of the Roman Rite were permitted to use of the Eastern Rite Antimension when celebrating Mass outside of churches, for the troops during the war. Thus mass could be celebrated close to the front lines of war without a bulky altar stone. 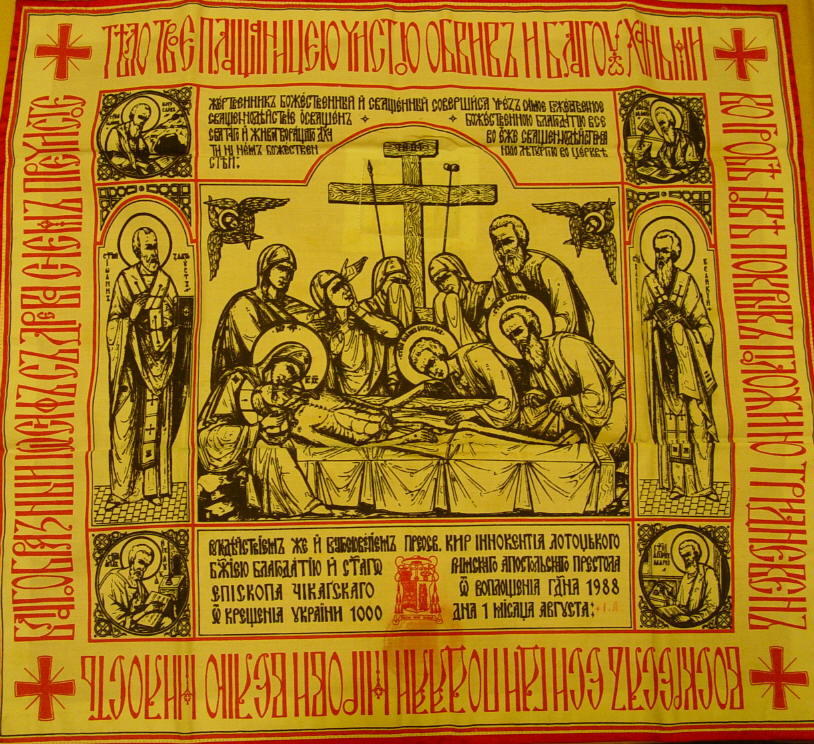 Q: Can an antimension still be made in the Latin Church? The old Rituale Romanum specifies the blessing of one, and how it must be made, but I am unaware of any post-conciliar legislation. If obtaining new antimensia in the Western Church is not possible, could a priest request that a hierarch of the Eastern Church bless one, in accordance with their customs?

A: An antimension, from the Greek for "instead of the table," is among the most important furnishings of the altar in Byzantine Christian liturgical traditions. It is a rectangular piece of cloth, of either linen or silk, typically decorated with representations of the entombment of Christ and the four Evangelists and scriptural passages related to the Eucharist. A small relic of a martyr is sewn into it. The Eucharist cannot be celebrated without an antimension that must be consecrated by a bishop and indeed is given to the priest by the bishop as a witness to his permission to celebrate the Divine Liturgy.

In the Latin tradition, Mass was celebrated with an altar stone containing a small relic. When celebrating outside of a church with a consecrated altar, a portable altar stone was used. After the Turkish conquest of the Byzantine Empire in 1454, however, many Eastern Christians, Greeks and Albanians fled to southern Italy. Some submitted to Rome while retaining their rite, but the faith of others was doubtful. Since some Latin priests began to use the antimensia there was a fear that celebrating on their antimensia was consequently considered as a communion in sacred things (Communicatio in Divinis) with heretics, and therefore forbidden.

"If the Greeks wish to accept portable altars consecrated by Latin Bishops, it would be well; if they do not wish to do so, the placing of their antimensia, or thrones, on stone altars when they celebrate, may be tolerated. They should use Corporals like the Latins, unless they use their thrones also as Corporals. It is not lawful for a Latin Priest celebrating in the Latin Rite in churches of the Greek Catholics, if he lacks his own portable altar stone, to celebrate the Sacrifice of the Mass on the antimensia, or thrones, of the Greeks. Every Priest must celebrate with a chalice of gold, or only silver or at least tin [pewter?], using a Throne or Corporal of linen, white and clean, and an altar covered with clean altar-cloths or with decently prepared ornamental covering."

These limitations were formally incorporated into the 1917 Code of Canon Law (Canon 823.2):

"In the absence of an altar of his own rite, it is fundamental that a priest can celebrate his own rite on an altar consecrated in another Catholic Rite, but not on the antimensiis (altar cloths) of the Greeks."

In spite of these prohibition, however, many exceptions and indults were granted to individual bishops and priests and to missionary societies to use a form of antimension to celebrate Mass on portable altars.

During the Second World War, the Holy See granted to military chaplains the privilege of using for the celebration of Mass, instead of the Latin-rite portable altar stone, "a veil which had enclosed, and well fastened, authentic relics." This was later extended to peacetime military activities. Since it was not always possible to obtain a veil with authentic relics, the use of an Eastern-rite antimension was considered an acceptable alternative.

Finally, Paul VI's "Pastorale Munus," a letter issued "motu proprio" (on his own initiative) in November 1963, gave to all local ordinaries of the universal Church (of all rites, Western and Eastern) the faculty to grant, for a just and serious reason, to all priests subject to them, who enjoy the faculty of the portable altar, the faculty of substituting for the portable altar stone the Byzantine or the Latin forms of the antimension.

Although this faculty has not been revoked, it has, in a way, been superseded by later liturgical legislation which no longer requires the use of an altar stone for portable altars and foresees the use of relics in fixed altars only if they are visibly part of a human body.

Finally, we present the text of the blessing of the Latin form of the antimension approved by the Congregation of Sacred Rites on March 12, 1947. The use of the antimension still required a special apostolic indult for it to be used in the celebration of Mass in mission territories, in place of an altar-stone or portable altar. It was reserved to a bishop but could be delegated to a priest. - Use of an Antimension in the Latin Church

There is a current (and not only historical as in Ken's answer) rule for the cross on or near the altar in the Roman Rite. No. 308 of the General Instruction of the Roman Missal, third edition 2002, says:

There is also to be a cross, with the figure of Christ crucified upon it, either on the altar or near it, where it is clearly visible to the assembled congregation. It is appropriate that such a cross, which calls to mind for the faithful the saving Passion of the Lord, remain near the altar even outside of liturgical celebrations.

So the use of a crucifix on or near the altar is required for the celebration of mass, but also recommended outside of liturgical celebrations.

A crucifix is also required for the celebration on a normal table outside of a church, No. 297:

The oriental rites have their own liturgical law.

Not the answer you're looking for? Browse other questions tagged catholicism tradition cross crucifix .

2
In light of the many changes in regulations, what is the purpose of the Roman Catholic altar and is it neccessary for a valid Mass?

7
Are there non Catholic/Orthodox churches that use a Crucifix?
16
When did the split in crufix/empty-cross sybolism occur and why did it happen?
10
Which liturgical rites (forms of Mass) are presently used in the Roman Catholic Church?
5
Are crucifixes used in Protestant churches in Germany?
5
Is it appropriate (as a Catholic) to make the sign of the cross when passing an Eastern Orthodox, Oriental Orthodox or Church of the East church?
1
What are the Church Laws governing ingredients and shapes of altar bread in the Catholic Church?
2
In light of the many changes in regulations, what is the purpose of the Roman Catholic altar and is it neccessary for a valid Mass?
3
Are there Catholic Churches in any part of the world which have the Tabernacle fixed in the middle of the church?