Did Christianity originate from Zoroastrianism and Judaism [closed]

Ask Question
Asked 4 months ago
Active 4 months ago
Viewed 53 times
-2
Closed. This question is off-topic. It is not currently accepting answers.

I was researching the history of Satan (https://en.wikipedia.org/wiki/Satan) and came across the following explanation about Zoroastrianism' influence on Christianity, 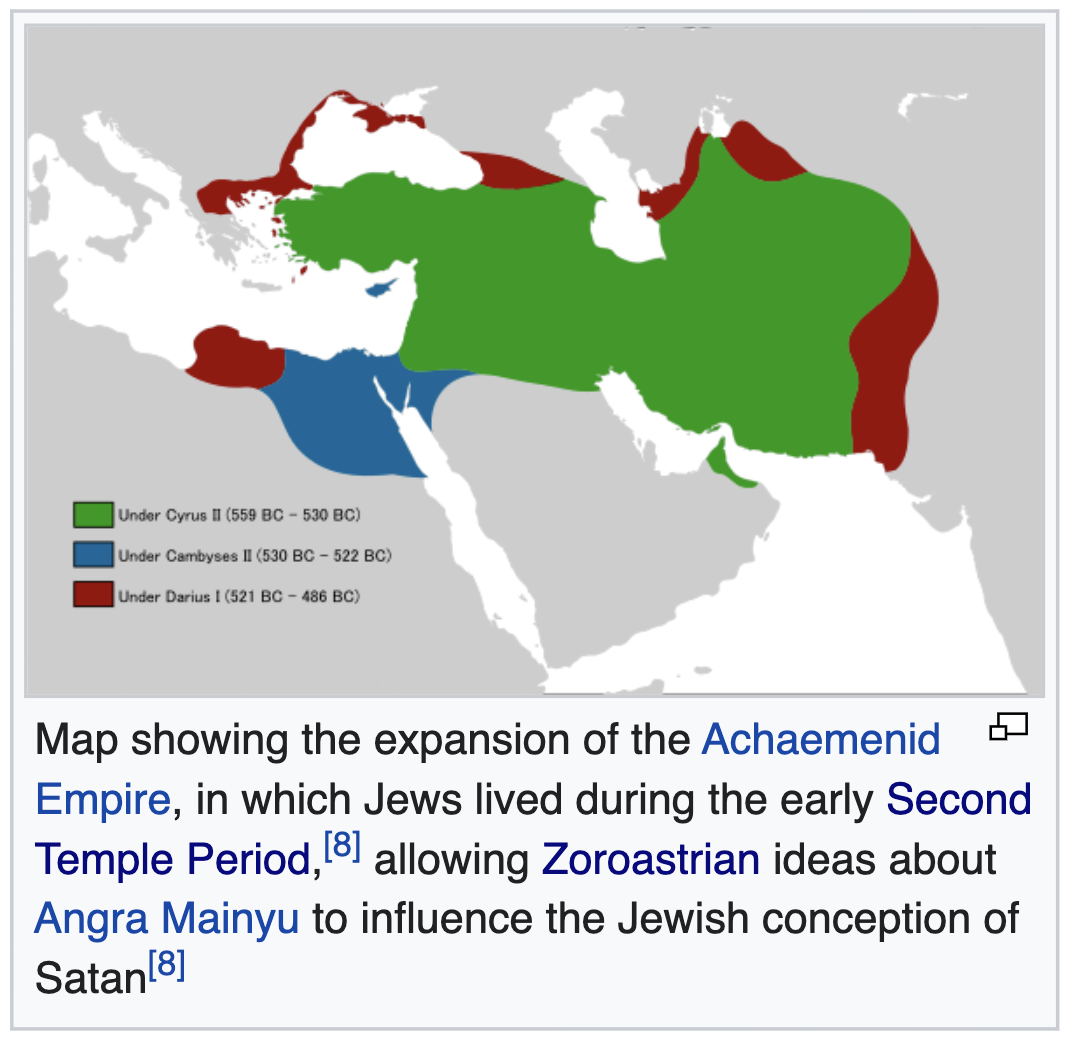 Is this a debated theory? Is there strong evidence for or against it?

Yes, this is a prevalent theory in historical criticism.

The name Satan, stems from the Hebrew word “śaṭan,” a term whose definition includes “adversary” and “accuser.” The term is found in ten instances in the OT. Six of these describe a human being:

and four instances refer to celestial servants of God. These figures are typically seen as angelic beings, or (in Hebrew) benay elohim, “sons of God.”

śaṭan was thus never used as a proper name and served merely as a term to identify an adversary. In the Hebrew Bible there was no Satan with a capital S, and in early Hebrew traditions, there was no devil, demons, or Hell. Evil and suffering in the world instead had another source; God himself. The Book of Isaiah 45:7 reads:

“I form light, and create darkness, I make good and create woe: I the Lord do all these things”

According to the Hebrew Bible or Old Testament, God alone controlled all events and was responsible for all conditions within creation, both good and evil. This idea, however acceptable it was early in Jewish traditions, became confusing and frustrating, and led to the basic question of theodicy: How could a loving and benevolent God allow so much suffering and pain on earth?

The eventual answer to this question within the religion of ancient Israel was found during the Persian period, 539-332 BCE, the period in which Persia controlled the entire Near East, including Israel. Perhaps the earliest point in Satan’s history may have its roots in the Persian Empire, which in turn influenced ancient Judaism.

The ancient religion of Persia was Zoroastrianism, based on the teachings of a religious philosopher named Zoroaster who may have lived around 600 BCE. Among his teachings was the compelling idea of dualism. According to dualism, evil does not stem from the good God or spirit known as Ahura Mazda, “wise lord,” within the faith. Instead, there existed a separate evil being known as Ahriman, “fiendish spirit,” also known as Angra Mainya, “evil spirit,” that created death, disease, and lies.

People had to choose whether to follow Ahura Mazda on the path of good or Ahriman on the path of evil. The idea from Persia that God himself was separate from evil would have been an acceptable answer to the early Jewish theodicy question and would have explained how there could be such suffering in a world created by a loving God. From this was born the idea that God did not personally create suffering himself, but that he would instead use other lowly figures to complete such tasks with his approval. This idea would lay the foundation for Satan’s entrance into the world.

In 1 Chronicles, śaṭan is prototyped for the first time in the Bible as a separate entity. Chronicles is also one of the last books of the OT, written around 300 BCE (so at the end of just after the Persian period). This seems to suggest that śaṭan based on Zoroastrian concepts had evolved from being a simple term used to describe any kind of adversary, human or angelic, to a major source of malice or evil. This concept of Satan would continue to develop outside of the Jewish canon, in the period known as the intertestamental period.

The intertestamental period refers to the 300-400 years between the completion of the Hebrew Bible, and the beginning of the New Testament that saw a flourishing of religious writings, especially apocalyptic ones. The apocalypticism of the intertestamental writings included an attempted to further explain why there was such great suffering in the world. This was a period that saw the invasion of the Greeks in 332 BCE and the advent of Roman control of the Near East starting in 63 BCE, and the diminishment of independent Jewish control over their own lands around Jerusalem. Jewish population was divided between those who accepted and those who rejected the Hellenization of society. Roman occupation also led to an increase in violence which ultimately led to a major assault on Jerusalem, a great famine against the Israelites, and the destruction of the second Temple in 70 CE.

It is during this period that Satan’s final development takes place before he emerges in the New Testament as God’s greatest adversary:

The writing of the New Testament would bring to an end the early development of Satan and bring him center stage in Christianity as the most powerful opponent of God, Jesus Christ, and humankind. Much like many concepts within Judeo-Christian tradition, the development of Satan was a slow and gradual process. It took hundreds of years to make him the merciless King of Hell who, as the New Testament book of Revelation has it.

Not the answer you're looking for? Browse other questions tagged comparative-religion other-religions or ask your own question.

2
Trinity (Christians) = Trimurti (Hindus)?
2
Is there a need for Christians to believe in Christianity at all, if they don't believe in Resurrection and Salvation through Christ alone?
5
Did the LDS ever recognize non-LDS polygamous marriages?