For some time I've been interested in the topic of Christian revivals throughout history. In particular, Argentina stands out in my opinion during the second half of the 20th century with a track record of very notable revivals involving massive healing crusades. The one that amazes me the most is the one that took place in 1954 with Tommy Hicks, which I only knew about from informal sources until very recently. What I find fascinating about this revival is the fact that Tommy Hicks managed to convince Argentine president Juan Peron to grant him free access to the press, the radio and the permission to hold a massive healing crusade in the Atlanta and Huracán soccer stadiums, which several sources affirm were full to overflow with people (see the previous link for details). Another example is Carlos Annacondia, a very popular Argentine revivalist preacher who was very active during the 80s and 90s in Argentina first, and abroad later. In this video you can see him preaching to a whole stadium in what appears to be a healing crusade in China. Lastly, Claudio Freidzon had his fair share of soccer stadium renting and massive healing crusades during the 90s in Argentina, as evidenced by these videos.

My question: How did the practice of holding massive healing crusades in large stadiums, arenas or similar spaces begin? How has it evolved over the course of history? What are the denominations most frequently involved in this practice?

If spiritual healing, being translated from death to life, is acceptable within the scope of OP's question parameter regarding healing crusades then I would say that Peter's first sermon in Acts 2, in which 3,000 were saved, should qualify as the earliest example of an open air evangelism campaign:

Now there were dwelling in Jerusalem Jews, devout men from every nation under heaven. And at this sound the multitude came together, and they were bewildered, because each one was hearing them speak in his own language. - Acts 2:5-6

Let all the house of Israel therefore know for certain that God has made him both Lord and Christ, this Jesus whom you crucified.” Now when they heard this they were cut to the heart, and said to Peter and the rest of the apostles, “Brothers, what shall we do?” And Peter said to them, “Repent and be baptized every one of you in the name of Jesus Christ for the forgiveness of your sins, and you will receive the gift of the Holy Spirit. For the promise is for you and for your children and for all who are far off, everyone whom the Lord our God calls to himself.” And with many other words he bore witness and continued to exhort them, saying, “Save yourselves from this crooked generation.” So those who received his word were baptized, and there were added that day about three thousand souls. - Acts 2:36-41

Missing from this, I suppose, is the element of pre-planning and coordination necessary to both rent and advertise an arena style crusade but this is really just from a human standpoint. If the Argentinian crusaders mentioned in the question, as well as Billy Graham and others pointed to in various answers, were asked they probably would indicate that they were led to plan and prepare by the Holy Spirit.

Peter's sermon appears impromptu from a human standpoint but, as he was filled with the Holy Spirit (v.2:4), this incident can be understood just as planned as any crusade from God's position.

OP: How did the practice of holding massive healing crusades in large stadiums, arenas or similar spaces begin? How has it evolved over the course of history? What are the denominations most frequently involved in this practice?

In America, there have been a noted four great awakenings. It appears the physical healing revivals only began during the Third Great Awakening. I will merely outline the main points.

Beginning in the early 1700's, this Awakening began with preaching the need for the savior Jesus Christ. Jonathan Edwards was one of the primary forces.

The pastor was encouraged to renewed tenderness and solemnity in his preaching. His themes were justification by faith, the awfulness of God’s justice, the excellency of Christ, the duty of pressing into the kingdom of God. Chapter XI The Great Awakening

While the First focused on the theme of salvation, the Second focused on reform, which branched into the Women's Movement, colleges, temperance, and abolition. This movement took place between about 1790 through 1820's.

There was also the beginning of the holiness idea.

The Third spans from the 1850's to the late 1900's. This marked the beginning of the so-called healing movements.

The preaching pattern had moved from the need for salvation to sanctification to baptism of the Spirit. Methodists had evangelized and now preached part of the holiness movement. This led to Pentecostalism and works of healing and other gifts of the Spirit. Notable preachers are Charles Parham, William Seymour, and those in Azusa Street.

So, the massive healing crusades started as evangelism, holiness, gifts of the Spirt.

"Revival" is perhaps the starting point for researching the modern-day crusades.

Or research "Awakenings" for examples from recent centuries. For example the First_Great_Awakening of the 1700s. The Wikipedia "Revival" page has some ideas to get you started.

The Billy Graham Crusades is perhaps what springs to mind first for many people alive today, but allow me to assure you it did not start with him.

The definition of a "massive" venue is relative to what was available at the place/time. For pure speculative fun, it is technically possible that the first such event could have been the Emperor Constantine in the Colosseum of Rome circa 380AD! :-)

First of all, John Mee’s response to this question seems to be on the right track.

In our modern are this whole idea of holding any sort of religious rally, crusade, mission or healing services in large stadium actually was influenced by no other than Billy Graham’s crusades which he started in 1947.

From the time his ministry began in 1947, Graham conducted more than 400 crusades in 185 countries and territories on six continents. The first Billy Graham Crusade, held September 13–21, 1947, in the Civic Auditorium in Grand Rapids, Michigan, was attended by 6,000 people. Graham was 28 years old. He called them crusades, after the medieval Christian forces who conquered Jerusalem. He would rent a large venue, such as a stadium, park, or street. As the sessions became larger, he arranged a group of up to 5,000 people to sing in a choir. He would preach the gospel and invite people to come forward (a practice begun by Dwight L. Moody). Such people were called inquirers and were given the chance to speak one-on-one with a counselor, to clarify questions and pray together. The inquirers were often given a copy of the Gospel of John or a Bible study booklet. In Durban, South Africa, in 1973, the crowd of some 100,000 was the first large mixed-race event in apartheid South Africa in which he stated that "apartheid is a sin." In Moscow, in 1992, one-quarter of the 155,000 people in Graham's audience went forward at his call. During his crusades, he frequently used the altar call song, "Just As I Am".

Graham was offered a five-year, $1 million contract from NBC to appear on television opposite Arthur Godfrey, but he had prearranged commitments. He turned down the offer in order to continue his touring revivals. Graham had crusades in London, which lasted 12 weeks, and a New York City crusade in Madison Square Garden in 1957, which ran nightly for 16 weeks.

William Franklin Graham Jr. (November 7, 1918 – February 21, 2018) was indeed the forerunner of use ing stadiums for crusades whether for distinctly preaching the Word of God or for healing ministries. He sowed the seeds. 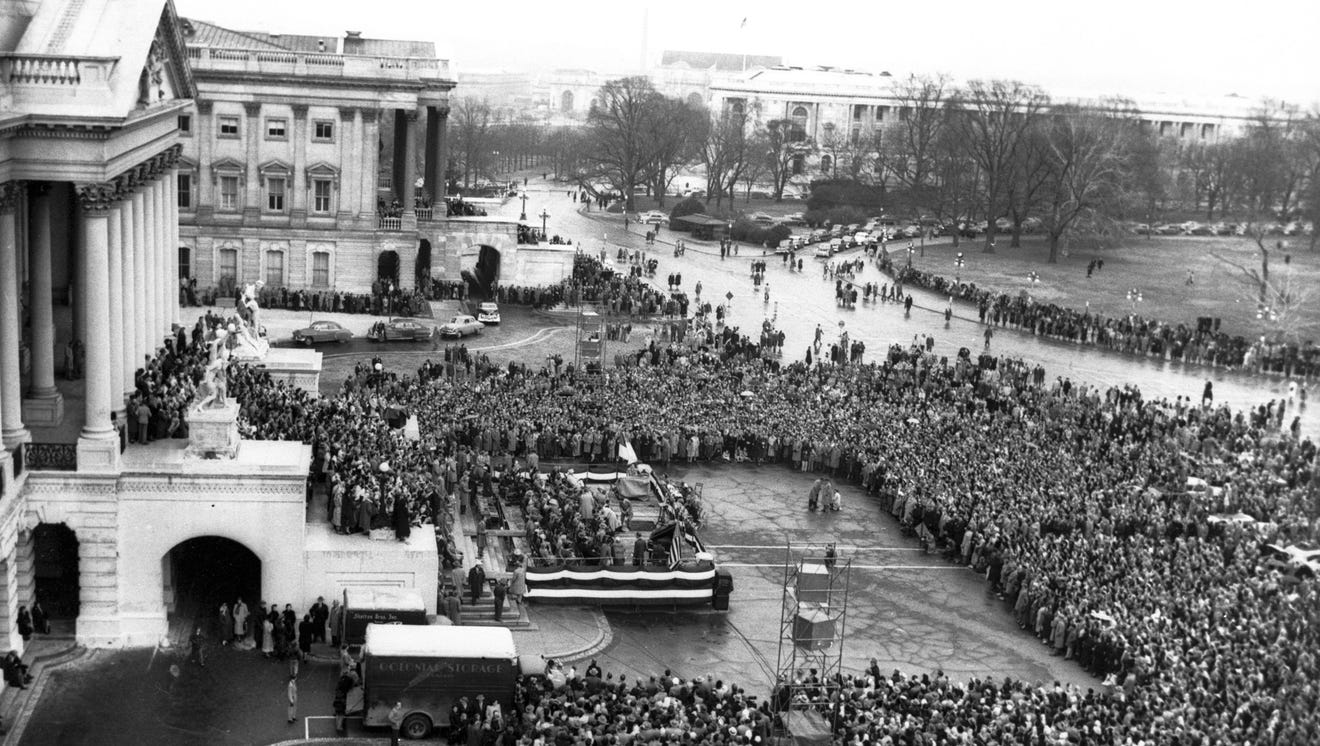 Billy Graham on the steps of the Capitol, in Washington DC, preaching a service on February 3, 1952.

Graham often said those evangelists, many itinerant Third World preachers who taught the Bible at the risk of their lives, were his true successors.

The healing powers of Billy Graham During his ”Crusades” were most prominent during his altar calls at the end of his crusade services.

If we want to use the Scriptures, only then perhaps we should look towards Our Lord we he gave the Sermon on the Mountain, as a point of origin of this basic concept.

Not the answer you're looking for? Browse other questions tagged church-history faith-healing .

5
According to LDS, do all non-LDS Christians lack the Gift of the Holy Ghost, and if so, how does this lack manifest itself in the lives of non-LDS?
1
Are there any healing ministries backed by a large number of testimonies reporting the healing of incurable (or hardly curable) diseases?

16
What passages of Scripture were used by the popes and crusaders to justify the Crusades?
6
What is the history and explanation as to why the "diaconate" was MIA in the Western Church over a certain period of time?
2
What is the justification for relying on faith healing and conventional medicine?
2
What are the important gifts and graces given to Mary to become Mother of the Church?
1
Complementarianism - What are the roles of men and women in the church?
6
Is there any evidence to support the claim that the Apostle St. Peter founded the Church in Antioch and, if so, what are the implications?
4
What are the origins and history of shaking, trembling, jerking, contorting, collapsing, fainting and similar manifestations in Christianity?
2
How do seventh day Sabbatarians explain the lack of Sabbath observing following Spirit led revivals?