How does the Catholic Church explain the omission of identity of the young man referred to in Mk 14:51?

In Mark 14:51, we read about a youth who flees, after he sees Jesus being arrested:

A certain young man was following him, wearing nothing but a linen cloth. They caught hold of him, but he left the linen cloth and ran off naked.

Many speculate that the young man was Mark himself. But then, having become one of the Evangelists later, he would not have referred to himself as a certain young man, unless of course, he had a terrible guilt feeling which he did not want to acknowledge.

My question therefore is: How does the Catholic Church explain the omission of identity of the young man referred to in Mk 14:51?

How does the Catholic Church explain the omission of identity of the young man referred to in Mk 14:51?

Yes there are several interpretations as to who this young man may have been. The Church offers no definitive answer to this equation.

Being a Catholic all my life and having been in a Catholic seminary for four years, I can confirm that the majority of Catholic theologians consider the young man to be St. Mark himself.

When one of Jesus’ followers (“a certain young man”) is captured at the same time Jesus is being arrested (in Mark 14:51-52), but then leaves his garment behind as he escapes naked, Pakaluk is able to make sense of the strange detail.

“It seems that this young man is Mark himself,” he writes. “It is a detail too small to include otherwise, and it seems unlikely that anyone else would have noticed it in the darkness and confusion. The telling of the incident has a humorous tone of self-congratulation, which is difficult to account for if it is someone other than Mark.”

Can you imagine if you had been the follower of Jesus who was apprehended at the same time as him, but then slipped away from your captors by wriggling free of your clothes? No doubt you would be wryly retelling that unique story for the rest of your life.

Pakaluk notes how the episode is only self-congratulatory for Mark in the same way that Peter ironically notes his own shortcomings: “The detail is humorous, and if written by Mark, self-depreciating.” - St. Peter’s memoirs: a vivid take on a familiar Gospel (The BC Catholic) 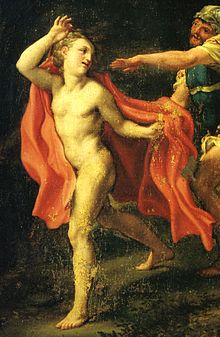 The Betrayal of Christ, with a soldier in pursuit of Mark the Evangelist

The young man was not St. Mark, but there has been speculation of his identity:

Ver. 51. And a certain young man followed him having a linen cloth cast round about his naked body; and they laid hold on him. That is, he was clothed (amictus, Vulg.) with a linen vest over his naked body. It is plain, from the word amictus, that this piece of linen was a kind of linen garment, fitting the body, but so that it might easily be put on and off the back. This is also clear from Pollux, who calls the linen cloth περιβόλαιον, i.e., a veil, a cloak, a covering.

You will ask who this young man was:

Roman Catholic Scholarship here does not specifically identify the person, but mentions how Church Fathers have identified different men, and also gives the modern identification.

51-52. This enigmatic detail is found exclusively in Mk. Its purpose is elusive; but it heightens the desertion of Jesus by his own. The young man is not identified; idle conjectures have named various candidates: John the Apostle (Ambrose, Chrysostom, Bede); James, “the brother of the Lord” (Epiphanius); John Mark (many modern commentators). -- Brown, R. E., Fitzmyer, J. A., & Murphy, R. E. (1996). The Jerome Biblical commentary (Vol. 2, p. 55). Englewood Cliffs, NJ: Prentice-Hall.

The modern identification as the author, John Mark, is based on how John identifies himself in his gospel.

Not the answer you're looking for? Browse other questions tagged catholicism exegesis gospel-of-mark or ask your own question.