Who are the people depicted in Dionisius' famous icon of Christ's descent into hell?

The renowned Russian Orthodox icon painter Dionisius produced a famous, and exquisitely beautiful, depiction of Christ's descent into hell. However, I'm having trouble identifying most of the figures depicted therein. More specifically: 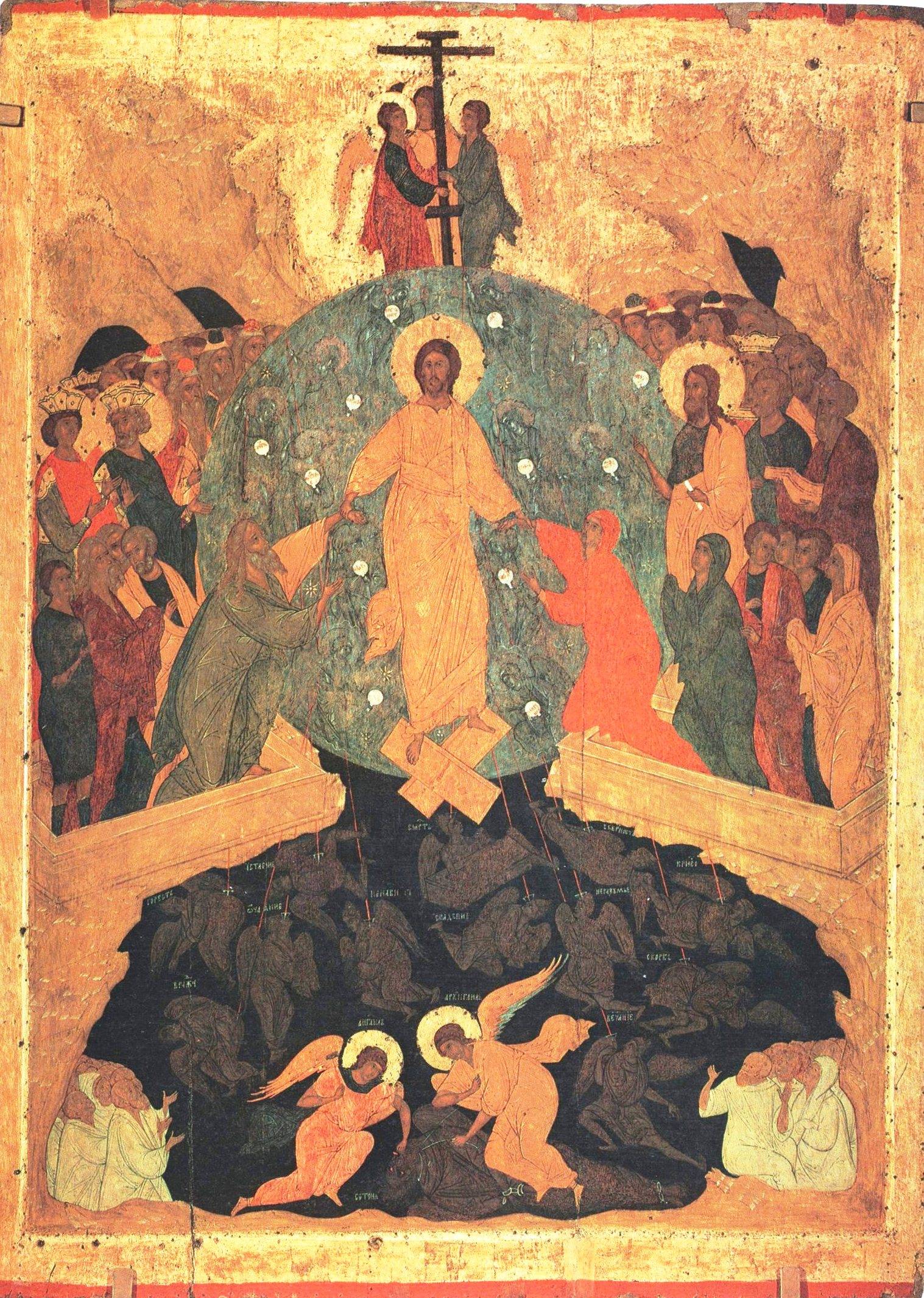 First off, although I'm not familiar with this particular icon, Eastern Orthodox icon have a strong continuity of style (sorry, Wikipedia source). This icon is the same as many others depicting the same event, perhaps most famously that at Chora Church. So, while my sources do not address this icon in particular, rest assured that the interpretation is the same.

[Christ] grasps the “first man” Adam with his right hand, and “first woman” Eve with his left, pulling them out of their sarcophagus-like prisons.[...] Various other Old Testament figures are seen to right and left, including [...] Kings David and Solomon and John the Forerunner (Baptist).

Source for quotation above. In the Dionisius icon, David and Solomon are on the left and John the Baptist is on the right. I believe at the top of the group on the right you can also see the the three holy youths who were thrown into the fire in Daniel. (Note what they're wearing on their heads, similar to the linked source, and that they're beardless.)

The "bluish haze" is called a mandorla.

The blue shape around Christ is called the Mandorla (which is Italian for almond, which describes its shape). The Mandorla is the uncreated, eternal light of Christ.

Source for quotation above.

Within the mandorla surrounding Christ, there are numerous angels, each one bearing the name of a virtue.

Source for quotation above.

These angels are shown throwing spears down into hades at demons named after corresponding vices, causing much chaos and anguish among them.

Source for quotation above, same as previous.

And in the depths of the pit, a skeletal being is sometimes shown, lying prostrate and bound up. This is Hades personified—Death and/or Satan, who has been destroyed and defeated by Christ, illustrating the truth of Hebrews 2:14, that “through death he might destroy him who has the power of death, that is, the devil.”

(Source for quotation, same as cited for the three holy youths.)

Yet despite their defeat, the passions are no less terrifying, as shown by the souls in hell – in the bottom corners of the icon – who fearfully look across the chasm toward Jesus. Their hands are held up in prayer and supplication and indeed this is the only way to overcome the passions and be resurrected with Christ.

Source, same as some of the previous ones.

Not the answer you're looking for? Browse other questions tagged eastern-orthodox iconography russia .

2
Are there examples of royal Orthodox saints (not martyrs) who have executed people?