What was the origin of the phrase "Abraham's Bosom" as used by Jesus?

" And it came to pass, that the beggar died, and was carried by the angels into Abraham's bosom: the rich man also died, and was buried; And in hell he lift up his eyes, being in torments, and seeth Abraham afar off, and Lazarus in his bosom. "

Though Jesus gives a literal picture of Lazarus sitting in the lap of Abraham ( and many drawings of the story of Lazarus picture him do so ), some suggest that Abraham's Bosom was a place where the dead would await their judgement, and that the phrase was taken by Jesus from Jewish literature. My question therefore is: According to Catholic teachings, what was the origin of the phrase "Abraham's Bosom" as used by Jesus in the Story of Lazarus and the Rich Man ?

Prior to the resurrection of Jesus Christ and the declaration that he is the Son of God, which is made after his resurrection - see Romans 1:4 - the revelation of the Father was not fully declared to Israel, though it was stated to the disciples of Jesus Christ.

In the absence of the coming revelation of the Father, Jesus merely states that Lazarus was in the bosom of 'Abraham' in what he later refers to (when he speaks to the one-time thief upon the cross) as 'Paradise'.

In this Paradise, Lazarus was actually in the bosom of the Father. But it could not be so stated until after the resurrection of Jesus Christ and the full revelation of the Son and the Father.

What is revealed in Jesus' last moments in crucifixion is that the one-time thief will be in Paradise, with Jesus Himself, within that very day.

The 'origin' of the saying by Jesus 'the bosom of Abraham' is Jesus himself.

It was an original saying, not based on Jewish tradition.

"Bosom of Abraham" refers to the place of comfort in the Biblical Sheol (or Hades in the Greek Septuagint version of the Hebrew scriptures from around 200 BCE, and therefore so described in the New Testament) where the righteous dead supposedly await Judgment Day.

The word found in the Greek text for "bosom" is kolpos, meaning "lap" "bay". This relates to the Second Temple period practice of reclining and eating meals in proximity to other guests, the closest of whom physically was said to lie on the bosom (chest) of the host, as in John 13:23.

The Jews had adopted the Persian, Greek, and Roman custom of reclining at meals, and had long since exchanged the original practice of standing at the Passover first for sitting and then for reclining in a setup called Triclinium. They reclined on the left arm and ate with the right. The expression "lies in the bosom" is well documented in extrabiblical sources. 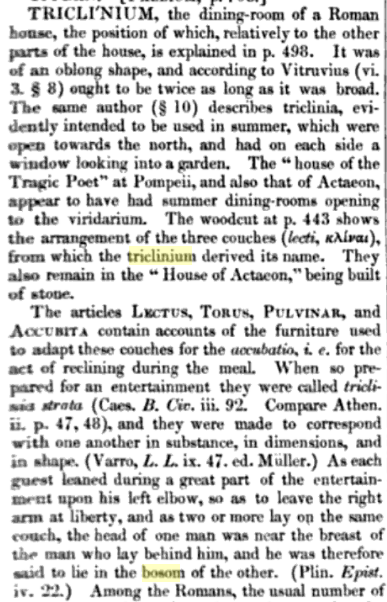 Not the answer you're looking for? Browse other questions tagged catholicism life-of-jesus gospels parables .

1
In Matthew chapter 26 verse 64 was Jesus saying that He would one day be their judge?
5
According to Catholicism, why did Jesus not name the rich man in the story of Lazarus and the rich man?
30
According to those holding that Lazarus was literally raised from the dead, why did Matthew, Mark, and Luke not mention it?
3
Was God "unmerciful" to Ananias & Sapphira in Acts 5:1-10?
4
What was the concept of heaven people had before the death of Jesus?
0
Does the delayed burial of Jesus attest to the fact that he had no close relatives other than his mother?