According to Catholicism must we all suffer in life?

In the Catholic Church there is a certain mystic aspect regarding to the suffering of Jesus Christ in which often faithful who go trough sufferings, especially for the faith, see their suffering as somehow joining to that of Christ. Very often Matthew 16:24-26 is cited here.

Must we all suffer in life?

According to Catholicism must we all suffer in life?

24 Then Jesus said to his disciples, “Whoever wants to be my disciple must deny themselves and take up their cross and follow me. 25 For whoever wants to save their life[a] will lose it, but whoever loses their life for me will find it. 26 What good will it be for someone to gain the whole world, yet forfeit their soul? Or what can anyone give in exchange for their soul? - Matthew 16:24-26

The whole state of mankind was altered when Adam committed the Original Sin in Genesis.

We shall examine the several effects of Adam's fault and reject those which cannot be original sin:

(1) Death and Suffering. - These are purely physical evils and cannot be called sin. Moreover St. Paul, and after him the councils, regarded death and original sin as two distinct things transmitted by Adam.

(2) Concupiscence. - This rebellion of the lower appetite transmitted to us by Adam is an occasion of sin and in that sense comes nearer to moral evil. However, the occasion of a fault is not necessarily a fault, and whilst original sin is effaced by baptism concupiscence still remains in the person baptized; therefore original sin and concupiscence cannot be one and the same thing, as was held by the early Protestants (see Council of Trent, Sess. V, can. v).

(3) The absence of sanctifying grace in the new-born child is also an effect of the first sin, for Adam, having received holiness and justice from God, lost it not only for himself but also for us (loc. cit., can. ii). If he has lost it for us we were to have received it from him at our birth with the other prerogatives of our race. Therefore the absence of sanctifying grace in a child is a real privation, it is the want of something that should have been in him according to the Divine plan. If this favour is not merely something physical but is something in the moral order, if it is holiness, its privation may be called a sin. But sanctifying grace is holiness and is so called by the Council of Trent, because holiness consists in union with God, and grace unites us intimately with God. Moral goodness consists in this, that our action is according to the moral law, but grace is a deification, as the Fathers say, a perfect conformity with God who is the first rule of all morality. Sanctifying grace therefore enters into the moral order, not as an act that passes but as a permanent tendency which exists even when the subject who possesses it does not act; it is a turning towards God, conversio ad Deum. Consequently the privation of this grace, even without any other act, would be a stain, a moral deformity, a turning away from God, aversio a Deo, and this character is not found in any other effect of the fault of Adam. This privation, therefore, is the hereditary stain. - Catholic Encyclopedia

Now sufferings in this life can generally be either passive or active, depending on the circumstances undertaken in our daily life here on earth. The sufferings of the Holy Souls in purgatory are uniquely passive in this regard.

Passive sufferings refers to those sufferings in this life that come our way as a result of illness, death or misfortune, such as war and persecutions. As the old saying goes: We must grin and bear it. A chosen few know the value of such suffering and actually unite their sufferings to Christ on the Cross for the sake of the Church and the salvation of men

Active sufferings are those such sufferings that are taken up by individuals voluntarily for the greater glory of God, personal sanctification or the conversion of sinners. Such voluntary sufferings include fasting and taking the discipline.

It is known that Pope St. John Paul II took the discipline on a regular basis: John Paul II and Taking the Discipline. 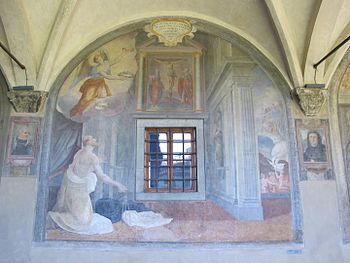 Fresco in the Basilica of Santa Maria Novella showing Saint Dominic with a discipline in his hand, kneeling before a crucifix.

Two questions have plagued the minds of Christians and non-Christians alike: Why is there suffering? Why does God allow suffering?

There is one person who stands out above all to give an answer to these deepest of questions, namely St. Paul. In St. Paul’s writings we find a greatly developed meaning of suffering. Pope John Paul II explains why St. Paul writes so much on suffering: “The Apostle shares his own discovery and rejoices in it because of all those whom it can help – just as it helped him – to understand the salvific meaning of suffering” (Salvifici Doloris, 1).

Paul understands that the suffering he endures serves as a way to be like Christ, as well as it being for Christ’s sake. Paul says: “Indeed I count everything as loss because of the surpassing worth of knowing Christ Jesus my Lord. For his sake I have suffered the loss of all things, and count them as refuse, in order that I may gain Christ and be found in him, not having a righteousness of my own, based on law, but that which is through faith in Christ, the righteousness from God depends on faith; that I may know him and the power of his resurrection, and may share his suffering, becoming like him in his death, that if possible I may attain the resurrection from the dead” (Philippians 3:8-11)

It is in weakness that we are more apt to trust in Christ because we realize that what we accomplish is not of our own doing, but the grace of Christ is working in us. Furthermore, it is in our weakness and suffering that we grow in humility and cannot pride ourselves in our accomplishments. We suffer “to make us rely, not on ourselves but on God who raises the dead.” (2 Corinthians 1:9)

We see in these verses of 2 Corinthians 12 that this suffering is once again “for the sake of Christ.” It is through grace that Paul can be content with suffering. We receive here an insight into the effectiveness of grace. Grace helps us to participate in the salvific act of suffering and to be content with it. - St. Paul explains the meaning of suffering

The term "dark night (of the soul)" in Roman Catholic spirituality describes a spiritual crisis in the journey toward union with God, like that described by St. John of the Cross.

St. Thérèse of the Child Jesus and the Holy Face, OCD, a 19th-century French nun and Doctor of the Church, wrote of her own experience of the dark night. Her dark night derived from doubt of the existence of eternity, to which doubt she nonetheless did not give intellectual or volitional assent, but rather prevailed by a deepening of her Catholic faith. However, she painfully suffered through this prolonged period of spiritual darkness, even declaring to her fellow nuns: "If you only knew what darkness I am plunged into..!"

While this spiritual crisis is usually temporary, it may endure for a long time. The "dark night" of St. Paul of the Cross in the 18th century endured 45 years, from which he ultimately recovered. The dark night of St. Teresa of Calcutta, whose own name in religion she selected in honor of St. Thérèse, "may be the most extensive such case on record", having endured from 1948 almost until her death in 1997, with only brief interludes of relief, according to her letters.

Our sufferings in this life are the greatest way to aid soul to sanctify themselves and be totally united to God through Christ’s Passion. It is the stuff Catholic Mystics are made of!

Sometimes people focus too much on Christ's sufferings and not how much he poured out His love on the cross. Redemption by Christ was not so much achieved by how much He suffered, but how much He loved us (CCC 616). Suffering without love has little to no value, or even be senseless. However, suffering with love for your brethren is what counts. You will be judged by how much you loved in your life (St. John of the Cross). Thus, to answer the OP's question, indeed, we all need to suffer, because nobody will enter the Kingdom of Heaven without having loved.

Not the answer you're looking for? Browse other questions tagged catholicism exegesis gospel-of-matthew suffering persecution or ask your own question.