Does the Catholic Church have a policy on how altars are to be destroyed?

Recently, I saw some articles about how a Catholic priest got defrocked following his arrest for performing indecent activities in a public place, after a bystander walking past his church one night noticed that the lights were on, and looked through a window and saw him on top of the church's altar with a couple of dominatrices.

The articles I've seen go on to specify that once the local archbishop was made aware of this, he had the altar disposed of by burning and replaced with a new one.

This got me wondering: the Catholic Church is well known for having piles and piles of rules and regulations governing its activities, and I wondered if the way that the archbishop responded to this event was mandated by those rules, or if he was acting on his own recognizance.

Does the Catholic Church have any rules for how to dispose of profaned church altars? If so, does it mandate that they be burned?

Does the Catholic Church have a policy on how altars are to be destroyed?

Churches and altars may loose their sacred consecration in any number of ways!

Normal loss of an altar’s consecration is due to damage because of age.

An altar loses its consecration: (1) when the table of the altar is broken into two or more large pieces; (2) when at the corner of the table that portion which the consecrator anointed with holy oil is broken off; (3) when several large stones of the support of the table are removed; (4) when one of the columns which support the table at the corners is removed; (5) if for any reason whatever the table is removed from the support, or only raised from it — e.g., to renew the cement; (6) by the removal of the relics, or by the fracture or removal, by chance or design, of the small cover, or slab, placed over the cavity containing the relics.

The scenario the OP has written involves an act of desecration and as such the the whole church and it’s altar must be reconsecrated by the local ordinary (bishop) as soon as possible.

The vast majority of Catholic Churches have stone altars and not wooden altars, thus both altar and church would need to be reconsecrated to sacred usage after doom serious profanity happened within the walls of a consecrated church such murder or a scenario mentioned above.

The Archbishop of New Orleans reconsecrated both altar (wooden) and church on October 10th, 2008. 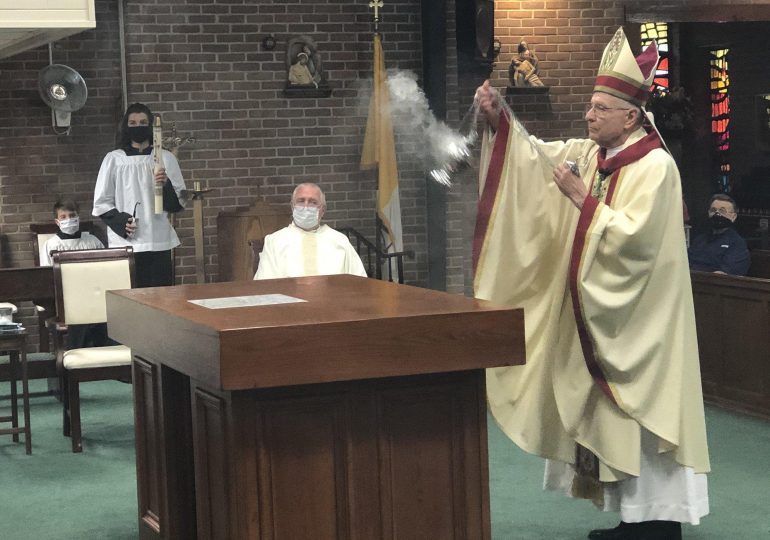 Does the Catholic Church have any rules for how to dispose of profaned church altars? If so, does it mandate that they be burned?

General usage would be to reconsecrate the altar (and church) since Rome requires at least one fixed altar in stone be present in each parish church.

Catholics are instructed to dispose of old sacramentals in a way that shows due reverence. All sacramentals can be either burned or buried in order to properly dispose of them. This type of disposal honors their sacred purpose and returns them to the earth in a dignified way. If a person is unable to do either, the sacramental may be dropped off at the parish office and someone on staff can take care of it.

Stone and metal can not be burned, so burying it in the ground where people would not walk over then is an option.

Can. 1171 Sacred objects, which are designated for divine worship by dedication or blessing, are to be treated reverently and are not to be employed for profane or inappropriate use even if they are owned by private persons.

The Church takes seriously the sacred and a grave violation of this means the sanctuary and it’s altar must be reconsecrated as soon as possible so the faithful may have a sacred place to worship again. In Latin the prayers used in the old rite are called Ritus Recconciliandi Ecclesiam Violatam (Page 214) of the Rituale Romanum of Pope St. Pius V

Even the desecration of a Catholic Cemetery must be reconciled backed to it’s proper usage after a desecration or sacrilegious usage. See: Ritus Reconciliandi Coemeterium Violatum (Page 218) of the Rituale Roamanum of Pope St. Pius V.

Sacrilege consists in profaning or treating unworthily the sacraments and other liturgical actions, as well as persons, things, or places consecrated to God. Sacrilege is a grave sin especially when committed against the Eucharist, for in this sacrament the true Body of Christ is made substantially present for us. - Catechism of the Catholic Church

According to Matters liturgical worn out priestly vestments are permitted to be disposed of in the typical manner (fire or burial) as well as transformation. Old priestly vestments may be cut up and made into some other usage as long as one can not distinguish their original usage and it is not intended for sacrilegious purposes.

Sometimes churches are sold or in danger of being desecrated as in times of war. In such times, the Church though the local ordinary (bishop) may pray the ritual of deconsecration (us consecrating prayer) asking Almighty God to take it’s consecration or blessing away, before the building are turned over to secular hands.

2120 Sacrilege consists in profaning or treating unworthily the sacraments and other liturgical actions, as well as persons, things, or places consecrated to God.

Altars are treated in Canon Law:

1238 An altar loses its dedication or blessing in accordance with Canon 1212.

1212 Sacred places lose their dedication or blessing if they have been in great measure destroyed, or if they have been permanently made over to secular usage, whether by decree of the competent Ordinary or simply in fact.

Canon 1238 indicates that a destroyed altar is no longer consecrated. The canon doesn't say that a profaned item must be destroyed.

It is customary for consecrated objects which have been defiled to be destroyed, usually by burning. Fr William Saunders writes in the Arlington Catholic Herald, via Catholic Education (my emphasis):

Blessed religious objects break or wear from use. The basic rule for the disposition of these items is to burn or to bury them. During the 1800s, both the Sacred Congregation for the Rites and the Holy Office (now known respectively as the Sacred Congregation for the Sacraments and Divine Worship and the Sacred Congregation for the Doctrine of the Faith) issued various determinations concerning this issue. Here are a few examples: A chalice which becomes "unserviceable" is not to be sold, but must be used for some other sacred purpose or melted. Vestments, altar cloths, and linens must be destroyed. Polluted or excess holy water must be poured into the ground. Palms are to be burned, and the ashes then used for distribution on Ash Wednesday or returned to the ground. A broken rosary or religious statue normally would be buried. In all, the underlying idea is that what has been dedicated to God should be returned to God. Never should one just "throw out" what has been dedicated to God.

Without the actual text* of the "various determinations" it's not possible to say definitively whether the action was following the directions of the Holy Office, or the archbishop was acting on his own authority. However, the returning to God of a thing which can no longer be used for a sacred purpose is reasonable, and the burning of a thing to do that is customary.

*Probably published in the Acta Apostolicae Sedis, not readily available online and certainly not in English.

Not the answer you're looking for? Browse other questions tagged catholicism canon-law altar .