Is there any referring in the holy books regarding Jesus if he covered his head? And if not, based on what a lot of pastors/bishops or pop, cover their head? (of course, different types and forms of covers on the head, I'm not familiar with their specific names)

Also, I can see for example in the Orthodox Christianity that only people with function in the church are going with this cover, but other people from their community, although they are absolutely religious, they do not cover their head. And it raises another question if it's only for those who have a function in the church?

In general, it is now believed the Jesus did not wear something on his head. Whether or not Our Lord covered his head against the the external elements of nature is anyone’s guess, but prudence would dictate a possibility in this scenario.

We do know that he wore a Crown of Thorns at his Crucifixion. In fact, this is the only occasion that we historically know that Jesus wore something on his head.

Did Jesus Wear a Kippah?

It is certain that Jesus, a Jew residing in the land of Israel in the first century, did not wear a kippah (skullcap).

The custom of wearing a kippah arose in Babylonia between the third and fifth centuries C.E. among the non-Jewish residents—Jewish residents of Babylonia had not yet adopted this custom, as the Dura-Europos frescoes show—and passed from there to the Jewish community of Europe.

Although priests wore a מִגְבַּעַת (migba’at, a turban-like headdress; see Exod. 28:4, 40; Lev. 8:13), other Jews of the Second Temple period did not wear a headcovering. This is confirmed both by the literature and archaeological remains of the period. For instance, the reliefs on the Arch of Titus in Rome, which depict the victory procession in Rome following the conquest of Jerusalem in 70 C.E., show the Jewish captives bareheaded. Likewise, the frescoes of the mid-third century C.E. synagogue excavated at Dura-Europos represent all the Jewish men as bareheaded except for Aaron the priest.

Is our modern imagery of how Jesus truly looked like all that accurate?

There is no neat physical description of Jesus in the Gospels or in ancient Christian literature. But there are incidental details. From the Bible (for example, Mark 6:56) you can discover that he wore a mantle – a large shawl ("himation" in Greek) – which had tassels, described as "edges"; a distinctively Jewish tallith in a form it was in antiquity. Usually made of wool, a mantle could be large or small, thick or fine, coloured or natural, but for men there was a preference for undyed types.

He wore a tunic (chitōn), which for men normally finished slightly below the knees, not at the ankles. Among men, only the very rich wore long tunics. Indeed, Jesus specifically identifies men who dress in long tunics ("stolai", Mark 12:38) as wrongly receiving honour from people who are impressed by their fine attire, when in fact they unjustly devour widows' houses.

Jesus's tunic was also made of one piece of cloth only (John 19:23-24). That's strange, because mostly tunics were made of two pieces sewn at the shoulders and sides. One-piece tunics in first-century Judaea were normally thin undergarments or children's wear. We shouldn't think of contemporary underwear, but wearing a one-piece on its own was probably not good form. It was extremely basic.

Perhaps it is unsurprising, then, that Jesus was remembered as looking shabby by a scholar named Celsus, writing in the mid second century, in a treatise against the Christians. Celsus did his homework. He interviewed people, and he – like us – was quite interested in what Jesus looked like. From Jews and others he questioned, he heard that Jesus "wandered about most shamefully in the sight of all". He "obtained his means of livelihood in a disgraceful and importunate way" – by begging or receiving donations.

From the perspective of respectable people, we can surmise then that Jesus looked relatively rough. When the Christian writer Origen argued against Celsus, he rejected many of his assertions, but he did not dispute this.

And so while Jesus wore similar clothes to other Jewish men in many respects, his "look" was scruffy. I doubt his hair was particularly long as depicted in most artwork, given male norms of the time, but it was surely not well-tended. Wearing a basic tunic that other people wore as an undergarment would fit with Jesus' detachment regarding material things (Matthew 6:19-21, 28–29; Luke 6:34-35, 12:22-28) and concern for the poor (Luke 6:20-23). - It turns out our collective image of how Jesus dressed is very wrong

Could Jesus have worn something on his head to protect himself from the heat or cold of the day? It is possible, but tradition and history is silent on this issue. 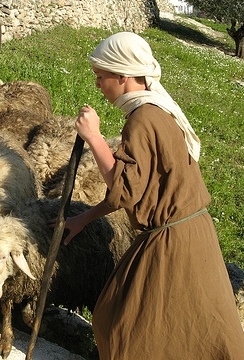 In any case, St. Paul considered it a dishonor for a man to cover his head when praying or prophesying?

".. But when the Jewish Festival of Tabernacles was near, Jesus’ brothers said to him, “Leave Galilee and go to Judea, so that your disciples there may see the works you do. No one who wants to become a public figure acts in secret. .... Therefore Jesus told them:"".......I am not going up to this festival, because my time has not yet fully come.” After he had said this, he stayed in Galilee. However, after his brothers had left for the festival, he went also, not publicly, but in secret.

That was an occasion on which Jesus must have covered his head. We also get a general idea of how strong the sun would have been, as Jesus walked from place to place preaching the Good News , from the Parable of the Sower:

".. As he was scattering the seed, some fell along the path, and the birds came and ate it up. Some fell on rocky places, where it did not have much soil. It sprang up quickly, because the soil was shallow. But when the sun came up, the plants were scorched, and they withered because they had no root. (Mk. 4:4-6) . Those were not the days when umbrellas were easily available for the common man to use. So, Jesus, like anybody else, would have to save his forehead and eyes from the scorching sun, with the available resource ,i.e. either a part of his clothing, or a separate piece of cloth which could be put on the shoulder or tied to the waist when one was not standing in the sun. . It is, therefore, quite reasonable to presume that Jesus did use some cloth to cover his head.

Not the answer you're looking for? Browse other questions tagged clothing or ask your own question.

4
Can we know anything about Jesus' appearance from the Bible?
10
What kind of clothes did Jesus wear?
4
Why do Indian Christian women wear head coverings?
4
In the Catholic Church, other than cardinals, are there any other prelates that may don red cassocks?
4
How do the Assemblies of God interpret 1 Corinthians 11:2–6?
4
Did Jesus wear premium clothes?
7
What is the origin of vicars/priests wearing the white dog collar?
4
Do JWs have vestments, clothing, or "sacred" or symbolic objects that are used for any particular occasion or position?
3
Should a priest refuse communion to the inappropriately dressed woman when she approaches to receive it?