Chimera Image on my leather jacket?

I have a leather jacket that just picked up from a girl who was selling it and I didn’t notice that it had a Chimera on its back. Truthfully, the image disturbs me a bit. I don’t want to curse my household neither my family by keeping it.

It has a lion head with a goat’s body and a serpent head at the end of its tail. I know the image of the serpent represents Satan & goats could represent unbelievers & maybe the lion could represent the enemy roaring like a lion. Please help me understand this further.

Are there any Christian traditions on this Chimerical imagery to indicate if it represents something particularly un Christian, or if it is linked to the occult?

The Chimera is of pagan origins, but the interpretation as to what it may symbolize in a Christian perspective is an open question.

The mythological Chimera is a terrifying creature that features a fire-breathing lion’s head attached to a goat's body and ending in a serpent tail. There are varying versions of what a Chimera actually looks like with some iterations giving the creature three heads—a lion, a goat, and a dragon—among other interesting interpretations. According to Greek mythology, the Chimera is the offspring of the monster Typhoeus and his partner, Echidna, who was half-woman half-snake.

In scientific terms, a chimera is an organism with two or more genotypes; a fetus that has absorbed a deceased twin, for instance, is a chimera. Some believe that the chimera is actually a personification of Mt. Chimera, a long-gone mountain that was always on fire, in Turkey. Based on its gnarly anatomy and fire-breathing abilities the Chimera sits in the top three on our list. - Chimera 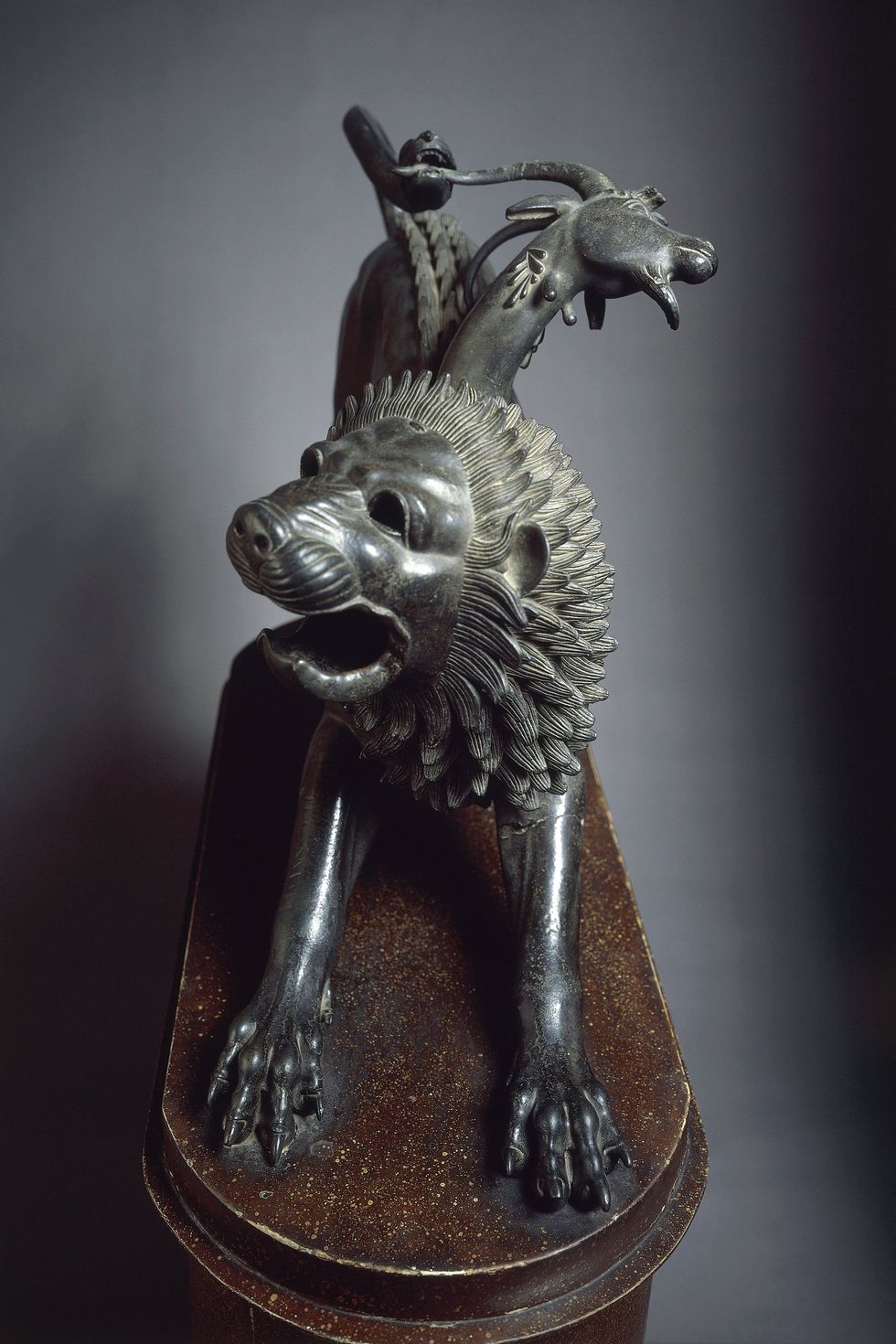 With the origins of the Chimera out of the way, there seems no biblical basis, or occultist basis for this mythical beast.

Chimera, in Greek mythology, a fire-breathing female monster resembling a lion in the forepart, a goat in the middle, and a dragon behind. She devastated Caria and Lycia until she was slain by Bellerophon. In art the Chimera is usually represented as a lion with a goat’s head in the middle of its back and with a tail that ends in a snake’s head. This matches the description found in Hesiod’s Theogony (7th century BC). The word is now used generally to denote a fantastic idea or figment of the imagination.

Nevertheless, Dragons sometimes symbolize the Devil in the Scriptures and in Christian art. So one could easily see a relationship in the imagery of the Chimera to symbolize a dragon and thus Satan, but I have found no real evidence of this.

Christians have for many centuries employed ancient mythological creatures in Christian art and imagery.

By A.D. 200, Tertullian called the unicorn a symbol of Christ. Ambrose, Jerome, and Basil agreed. The late-antiquity bestiary known as Physiologus popularized an elaborate allegory in which a unicorn tamed by a maiden stood for the Incarnation. This became the basic–and universal–medieval notion of the unicorn, justifying its appearance in every form of religious art.

The unicorn also acquired positive secular meanings, including chaste love and faithful marriage. (It plays this role in Petrarch’s Triumph of Chastity.) It was a heraldic motif, appearing on the national arms and coins of Scotland. The royal throne of Denmark was made of “unicorn horns” (actually narwhal tusks). The same material was used for ceremonial cups because the unicorn’s horn was believed to neutralize poison.

As for other fabulous beings, Jerome’s Life of St. Paul the First Hermit includes a friendly centaur and a God-fearing satyr. Dante’s Divine Comedy shows a griffin drawing the triumphant chariot of the Church. The monster-slaying Bellerophon mounted on Pegasus was an early Christian symbol of Christ’s victory over Satan.

Dragons adore the Christ Child in a fourteenth-century French treatise, The Life of Our Blessed Savior Jesus Christ. The infant Jesus blesses them for honoring the divine command “Praise the Lord from the Earth ye dragons” (Ps. 148:7). Mermaids, giants, sphinxes, chimeras, and other fabulous creatures from pagan myth and folklore have decorated churches and other vehicles of religious art.

And let’s not forget the four creatures which traditionally have represented the four Evangelists: a winged man (Matthew), a lion (Mark), an ox (Luke), and an eagle (John). - Source

Thus mermaids, giants, sphinxes, chimeras, and other fabulous creatures from pagan myth and folklore have decorated churches and other vehicles of religious art. The word Chimera is now also used to denote any fantastic, mythological and grotesque imaginary beast.

If the Chimera are simply considered ornamental art pieces, logic would indicate that a Chimera on a leather jacket is simply a form of art displaying the grotesque!

What's In a Name: Gargoyle, Chimera, or Grotesque?

Chimera are ornamental-only sculptures. They are the statues often depicted as monsters or mythical beasts such as birds, hybrid creatures, or monsters.

Thus, the statues that are pictured in this article were from the Notre Dame Chimera Gallery, located 150 feet (46 meters) above the Paris streets. Some of the more famous type of chimera:

Stryga - the most famous Notre Dame chimera, often referred to incorrectly as the "Spitting Gargoyle." It faced the Eiffel Tower. (See photo below.)

Gargoyles, on the other hand, are carved drain spouts designed to carry rainwater away from a building to protect the masonry from water damage. They adorned the cathedral for more than 600 years.5 Ornate carvings of creatures with water coming out of their mouths are examples (see photo). As architectural elements, gargoyles serve a functional purpose, whereas chimeras are merely decorative.

Grotesques is the generic term for such stone carvings, regardless of whether they carry water. 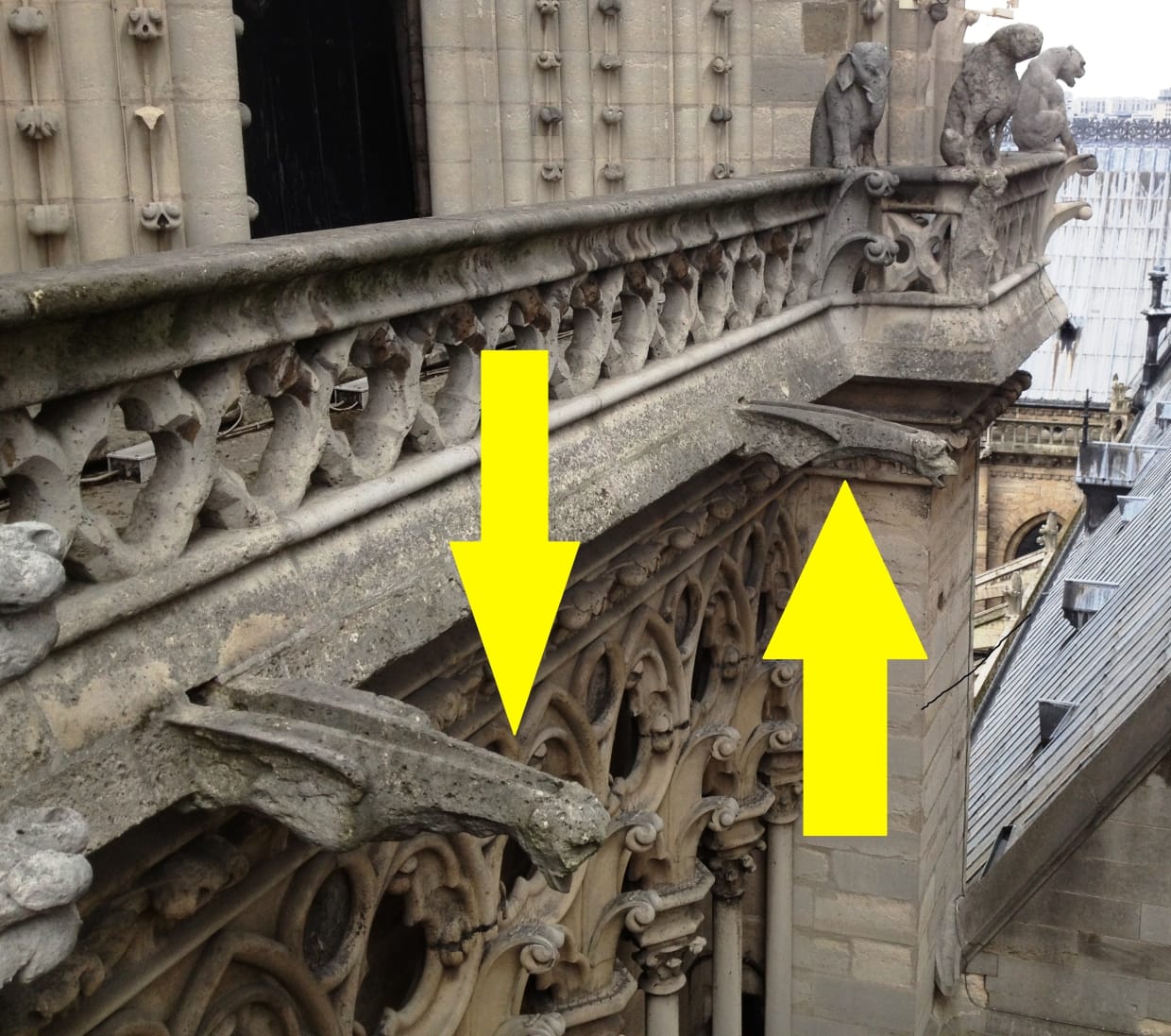 Not the answer you're looking for? Browse other questions tagged biblical-basis tradition symbolism art or ask your own question.