What are the reasons to justify the use of ”Shekinah” in Christianity?

Shekinah [It is not the hebrew word shâkhan (to dwell), but a proper name] is described as “The presence of God”, but also as “the female aspect of God”. But in the Targum, Talmud and Midrash she (because it is a female presence) is represented as a part of God but also as a separate entity and having a will [Targum: Ex. xxxiii. 15, xxxiv. 9 (Maybaum, l.c. pp. 5, 34)], which leads to problems with the concept of the Trinity of God.

The origin can be traced to rabbinical literature like the Talmud, Targum, Midrash and Zohar, where, in the latter, their androgynous god is the Ein Sof (“the nameless being”), divided in 10 sefirots or attributes of god (anthropomorphic parts of that one god). The Shekinah or Malkuth is the tenth sefirot who unite with the rests of the Ein Sof via Yesof (Ein Sof’s phallus, who is another sefirot). Kabbalistic Jews when they pray in proper davening they are copulating with this female goddess, the Shekinah.

Given this blasphemous and heretic view of God is really a surprise that Catholicism (priests and even Popes) accept this concept, and in the evangelical world is widely used as another name of God or a manifestation of Himself, principally in the Pentecostal Churches.

So, how has this concept became accepted in the whole Christian sphere (Catholics and Protestants)?

According to Targum and Testament Revisited by Martin McNamara, the term Shekinah was in use around the 2nd Century (or earlier). The Zohar, the Kabbalah text you mentioned, is from the 13th Century. The term did not originate with Kabbalah; the term was coined by rabbis to refer to the glory of God described in several places in the Old Testament, such as in Exodus 33, when God was speaking to Moses face-to-face.

What are the reasons to justify the use of ”Shekinah” in Christianity?

The term Shekinah may be described as “The presence of God”, but also as “the female aspect of God”, but it is in no way blasphemous.

In some sources, shekhinah represents the feminine attributes of the presence of God, shekhinah being a feminine word in Hebrew, based especially on readings of the Talmud.

The word shekhinah is not present in the Bible, and is first encountered in the rabbinic literature.

The Semitic root from which shekhinah is derived, sh.kh.n, means "to settle, inhabit, or dwell". In the verb form, it is often used to refer to the dwelling of a person or animal in a place, or to the dwelling of God. Nouns derived from the root included shachen ("neighbor") and mishkan (a dwelling-place, whether a secular home or a holy site such as the Tabernacle.

Just as Ben Miller points out in his answer, this Hebrew term out dates Kabbalistic writings like the Zohar. It’s origins are far older.

The Early Church would not have used this term, simply because it was either in Aramaic or Hebrew. Greek was the language most used in the Early Church, not Hebrew, after the second century, so why would it be used?

However the concept of referring certain aspect of God in a feminine aspect is not new in the Church.

The Holy Spirit as feminine: Early Christian testimonies and their interpretation

In two previous articles, I discussed the place and role of both the doctrine and the experience of the Holy Spirit in the Early Church (Van Oort 2011;2012). An important aspect remained, however: namely the fact that many early Christian authors - in particular those belonging to so-called 'Jewish Christianity' - spoke of the Holy Spirit as Mother.

How did this come to pass? And which consequences may be derived from this phenomenon for present-day discourse on the Holy Spirit?

An essential background to the occurrence of the Holy Spirit as Mother is, of course, the fact that the Hebrew word for Spirit, ruach, is in nearly all cases feminine. The first Christians, all of whom were Jews, took this over. Also in Aramaic the word for Spirit, rucha, is feminine. All this, however, does not fully account for the early Jewish Christian practice. A close reading of the relevant texts will reveal more.

Origen and the 'Gospel according to the Hebrews'

The first prooftext, which already brings in medias res, is from the Greek church father Origen (c. 185-254). In his Commentary on the Gospel of John, he says:

If anyone should lend credence to the Gospel according to the Hebrews, where the Saviour Himself says, 'My Mother (mētēr), the Holy Spirit, took me just now by one of my hairs and carried me off to the great Mount Tabor', he will have to face the difficulty of explaining how the Holy Spirit can be the Mother (mētēr) of Christ when She was herself brought into existence through the Word. But neither the passage nor this difficulty is hard to explain. For if he who does the will of the Father in heaven [Mt. 12:50] is Christ's brother and sister and mother (mētēr), and if the name of brother of Christ may be applied, not only to the race of men, but to beings of diviner rank than they, then there is nothing absurd in the Holy Spirit's being His Mother (mētēr); everyone being His mother who does the will of the Father in heaven. (Origen, Commentary on the Gospel of John 2, 12 - Preuschen 1903:67)

Jerome and the 'Gospel according to the Hebrews'

The church father Jerome (c. 342-420), who spent many years in Bethlehem, makes mention of several passages from the Gospel of the Hebrews, too. In his Commentary on Micah, he says:

… and he should believe in the Gospel, which has been edited according to the Hebrews, which we have translated recently, in which it is said of the person of the Saviour: 'My Mother (mater), the Holy Spirit, took me just now by one of my hairs ….' (Jerome, Commentary on Micah 2, 7, 6 - Adriaen 1969:513)

The essence of the same quote from the Gospel of the Hebrews is found in Jerome's Commentary on Ezekiel:

… and this relates to the Holy Spirit, who is mentioned with a female name (nomine feminino) among the Hebrews. For also in the Gospel which is of the Hebrews and is read by the Nazaraeans, the Saviour is introduced saying: 'Just now, my Mother (mater), the Holy Spirit, took me up …' (Jerome, Commentary on Ezekiel 4, 16, 13 - Glorie 1964:178).

In his Commentary on Isaiah, Jerome states:

And also this: (in the text) 'like the eyes of a maid look to the hand of her mistress' [Ps. 123:2], the maid is the soul and the mistress (dominam) is the Holy Spirit. For also in that Gospel written according to the Hebrews, which the Nazaraeans read, the Lord says: 'Just now, my Mother (mater), the Holy Spirit, took me.' Nobody should be offended by this, for among the Hebrews the Spirit is said to be of the feminine gender (genere feminino), although in our language it is called to be of masculine gender and in the Greek language neuter. (Jerome, Commentary on Isaiah 11, 40, 9 - Adriaen 1963:459)

While Jerome was well acquainted with the old Jewish Christian tradition of the femininity of the Holy Spirit, which in his time was still alive among the 'Nazaraeans', who read the 'Gospel according to the Hebrews', he considered it to be a question of language only.

The practice of the church, in its use of language for teaching and worship, follows this understanding. The Catechism teaches that we cannot properly assign a gender or genders to the divine, but the text retains masculine pronouns in speaking about God: “He is neither man nor woman; he is God” (239). But when in our use of language, God must be assigned a gender, the Holy Spirit is referred to in masculine terms.

Though the Holy Spirit is not feminine, this does not mean that we cannot consider both masculine and feminine images of God, especially as we relate to the divine in terms of paternal and maternal qualities. As the Catechism relates, “The language of faith thus draws on the human experience of parents, who are in a way the first representatives of God for man.” This allows us to image God as “father,” acknowledging Him as “origin of everything and transcendent authority” and also relate to the maternity of God which emphasizes “God’s immanence, the intimacy between Creator and creature” (239).

By calling God "Father", the language of faith indicates two main things: that God is the first origin of everything and transcendent authority; and that he is at the same time goodness and loving care for all his children. God's parental tenderness can also be expressed by the image of motherhood, which emphasizes God's immanence, the intimacy between Creator and creature. The language of faith thus draws on the human experience of parents, who are in a way the first representatives of God for man. But this experience also tells us that human parents are fallible and can disfigure the face of fatherhood and motherhood. We ought therefore to recall that God transcends the human distinction between the sexes. He is neither man nor woman: he is God. He also transcends human fatherhood and motherhood, although he is their origin and standard: no one is father as God is Father. - Catechism of the Catholic Church 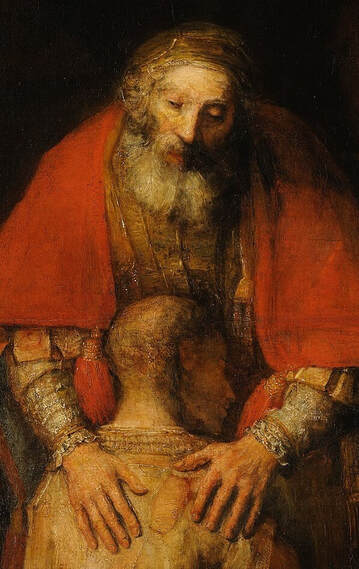 The Return of the Prodigal Son by Rembrandt

To better understand the female attributes of God, The Return of the Prodigal Son by Rembrandt is a great place to start one’s contemplation.

In the painting, the son has returned home in a wretched state from travels in which he has wasted his inheritance and fallen into poverty and despair. He kneels before his father in repentance, wishing for forgiveness and a renewed place in the family, having realized that even his father's servants had a better station in life than he. His father receives him with a tender gesture. His hands seem to suggest mothering and fathering at once; the left appears larger and more masculine, set on the son's shoulder, while the right is softer and more receptive in gesture. Standing at the right is the prodigal son's older brother, who crosses his hands in judgment; in the parable he objects to the father's compassion for the sinful son:

But he answered his father, "Behold, these many years I have served you, and I never disobeyed a commandment of yours, but you never gave me a goat, that I might celebrate with my friends. But when this, your son, came, who has devoured your living with prostitutes, you killed the fattened calf for him." — Luke 15:29–30, World English Bible

In the end, one will need better parameters in this subject matter before I would consider the term Shekinah even remotely blasphemous, even though it be of Hebrew usage.

Not the answer you're looking for? Browse other questions tagged catholicism church-history protestantism or ask your own question.