Do Reformed theologians understand the Catholic Church and the Papacy to have been true heirs of Peter until the Reformation?

In other words, say, in the fourth century, were they "on track" and the legitimate heirs of the reins of Christianity, so to speak but then went off track toward the middle ages? Or do they consider the authority of the Popes and all to have been illegitimate all along?

It is clear from John Knox's words, recorded at his meeting with Queen Mary at Holyrood in 1561 (accompanied by Lord James Stewart) that the reformer regarded the Papacy to be an intrusion and the mass to be an idolatrous sacrifice. He quite clearly regards both to be without warrant, from their inception.

‘Take one of the chief points, Madam, which this day is in controversy betwixt the Papists and us.

The Papists have boldly affirmed that the Mass is the ordinance of God, and the institution of Jesus Christ, and a sacrifice for the sins of the quick and the dead. We deny both the one and the other.

We affirm that the Mass, as it is now used, is nothing but the invention of man, and, therefore, is an abomination before God, and no sacrifice that ever God commanded.

Now, Madam, who shall judge betwixt us two thus contending? It is no reason that either of the parties be further believed, than they are able to prove but insuspect witnessing. Let them prove their affirmatives by the plain words of the Book of God, and we shall give them the plea granted.

What our Master Jesus Christ did, we know by His Evangelists; what the priest doeth at his Mass, the world seeth.

Now, doth not the Word of God plainly assure us, that Christ Jesus neither said Mass, nor yet commanded Mass to be said, at His Last Supper, seeing that no such thing as their Mass is made mention of within the whole Scriptures?’

The Meeting between Queen Mary and John Knox, by Robert Inerarity Herdman 1829-1888. 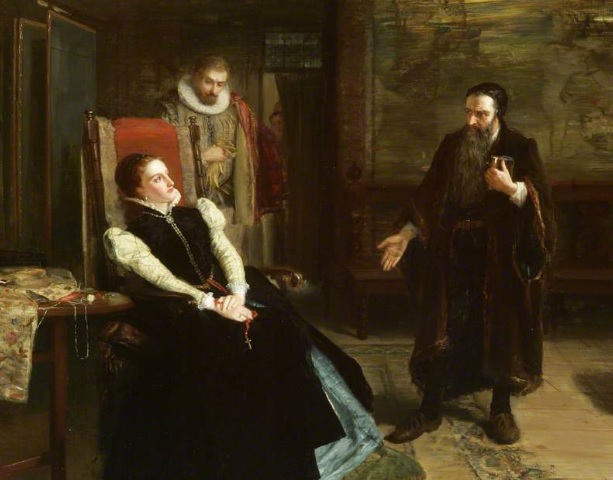 Not the answer you're looking for? Browse other questions tagged catholicism reformed-theology reformation ecclesiology .

19
What effect did the Reformation have inside the Catholic Church?
12
Origin of the Reformed "Marks of the True Church"
6
Jehovah's Witnesses's teaching on the Church
3
How does the Catholic church deal with the differences between the God described in the old and new Testaments?
4
In Western communion services, when was the origin of the practice of consistently offering only the bread to the laity?
4
On Amillenialism and the Catholic Church
7
Has Peter Lombard ever been venerated in the Catholic Church?
4
How do the reformed theologians understand Hebrews 3:14?
0
Imaginary or legendary saints associated with Catholicism?